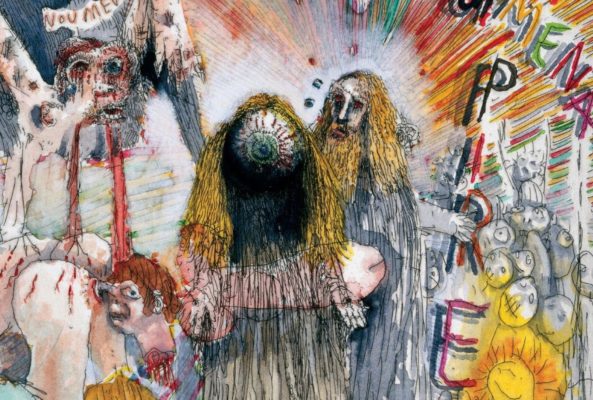 This philosophy book is intended for readers with four years of training in continental philosophy; I have 0 years and found it hard going. But then again, Nick Land belongs in the company of Sam Harris, Slavoj Žižek, and Jordan Peterson – rogue thinkers who have amassed a following outside of academia.

Nick Land was once a teacher at the University of Warwick, but he did not flourish beneath the scholar’s cope. He published just one book – 1992’s The Thirst for Annihilation: Georges Bataille and Virulent Nihilism – and his time as a lecturer was marked by vicious academic infighting. His interdisciplinary research group CCRU earned a reputation as a disruptive force, and his 1998 “resignation” might not have been entirely voluntary.

A divisive, polarizing figure, he provoked both adulation and execration. His jabs at the holy trinity of ‘continental philosophy’ – phenomenology, deconstruction, and critical theory – drew enmity from his more orthodox peers; and while his virulent anti-humanism affronted philanthropic conservatives, his swipes at institutionalized critique earned him the opprobrium of the academic Left. Marxists in particular were outraged by Land’s aggressive championing of the sociopathic heresy urging the ‘ever more uninhibited marketization of the processes that are tearing down the social field’ – the acceleration, rather than the critique, of capitalism’s disintegration of society. – Ray Brasser

Mainstream philosophy finds him unacceptable. Unacceptable the way tall poppies are to lawnmowers? As economist Garrett Jones observed, “read the room” is often an argument against the room.

Land cuts a disquieting and even apocalyptic figure – a human lightning rod, channeling power from the outer dark. Whether he’s is writing fiction or philosophy or indistinguishable meshings of the two, reading his prose can be unnerving experience – as though you’re inviting a shadow to hang over your head.

Fanged Noumena gathers up his writings from 1987 to 2007, a period that encompasses his academic career, mental breakdown, and move to Shanghai. In brief, Land is an accelerationist: a piece of jargon that means different things to different people.

It might reflect a goal to bring about a technological singularity, or it might reflect a realization that this process has already begun and is now too late to stop. Human bodies evolved over millions of years. Human society, over tens of thousands. But capitalism, catalyzed by technology, moves still faster, faster than anything we’ve seen before. More importantly, it’s becoming faster faster than anything we’ve seen before. It’s picking up speed like a gale-force wind, howling and sucking things off the ground, causing humanity’s mooring lines to snap one by one. Some people want to slow down capitalism via things like government, centralization, and tradition. We were never made to go this fast. We have to slow down. Nick Land’s response is “cut the lines. Let’s ride.”

Accelerationism became a topic of some discussion in the late double zeroes. The notion of increasing speed was an appealing one. Silicon Valley buzzwords like “disruption” and “growth-hacking”, and Mark Zuckerberg’s infamous “Move fast and break things” quote are accelerationist in outlook. Then the word began showing up in the manifestos of mass murderers. Since then accelerationism has become a shibboleth: having an interest in it makes you ideologically suspicious. The thing about accelerating is that it’s undefined what you’re accelerating toward. To some it’s a techno-singularity, to others it’s race war. Both Charles Manson and Elon Musk were (and are, respectively) in accelerationists in some sense.

As is typical for Land, Fanged Noumena isn’t straight philosophy, and sometimes not even slant philosophy. “Narcissism and Dispersion” begins with a discussion of Heidegger’s analysis of George Trakl’s poems. “CyberGothic” is a reverie on William Gibson.

Other sections are brutal flamethrower attacks that leave huge swathes of mainstream philosophy blazing. “Making it with Death” features caustic tirades (“If Deleuze is to be salvaged from the inane liberal neo-Kantianism that counts as philosophy in France today…”) that couldn’t have earned Land many friends, and it might be intentional strategy that his point is often obscure.

I’m not able to offer cogent analysis of anything here. There are some fictional prose pieces, such as Ballardian/Burroughsian pastiches . “KataqoniX” is a work of poetry seemingly created while watching Apocalypse Now on acid – it predates Kenji Siratori by years but treads over the same ground. There’s an interview with one “Daniel Charles Barker” who is almost certainly a nonexistent person, perhaps a collective identity for the CCRU.

“Delighted to Death” was particularly of interest, in the way it doesn’t just point to accelerationism’s future, but traces the movement’s opposite.

Cioran quotes Lao Tsu’s maxim ‘the intense life is contrary to the Tao’ and compares the tranquility of the modest life with the thirst for annihilating ecstasy that has possessed the Western world. However, acknowledging the compulsion of his Occidental heritage, he remarks ‘I can pay homage to Lao Tsu a thousand times, but I am more likely to identify with an assassin’. Our culture, he argues, is essentially fanatical.

Is Taoism reversed accelerationism? And does it follow that Eastern philosophy is reversed western philosophy? Their slow to our fast? It might all be a game of speed, and identifying the plus and minus modifiers. One the main concepts in accelerationism (particularly the part of it Land dwells in) is “deterritorialization” – a windy word that basically means unwriting and uncodifying outdated concepts that exist to hold back the hand of history. Or something. As Land himself “explains”.

For accelerationism the crucial lesson was this: A negative feedback circuit – such as a steam-engine ‘governor’ or a thermostat – functions to keep some state of a system in the same place. Its product, in the language formulated by French philosophical cyberneticists Gilles Deleuze and Félix Guattari, is territorialization. Negative feedback stabilizes a process, by correcting drift, and thus inhibiting departure beyond a limited range. Dynamics are placed in the service of fixity – a higher-level stasis, or state. All equilibrium models of complex systems and processes are like this. To capture the contrary trend, characterized by self-reinforcing errancy, flight, or escape, D&G coin the inelegant but influential term deterritorialization. Deterritorialization is the only thing accelerationism has ever really talked about.

In socio-historical terms, the line of deterritorialization corresponds to uncompensated capitalism. The basic – and, of course, to some real highly consequential degree actually installed – schema is a positive feedback circuit, within which commercialization and industrialization mutually excite each other in a runaway process, from which modernity draws its gradient. Karl Marx and Friedrich Nietzsche were among those to capture important aspects of the trend. As the circuit is incrementally closed, or intensified, it exhibits ever greater autonomy, or automation. It becomes more tightly auto-productive (which is only what ‘positive feedback’ already says). Because it appeals to nothing beyond itself, it is inherently nihilistic. It has no conceivable meaning beside self-amplification. It grows in order to grow. Mankind is its temporary host, not its master. Its only purpose is itself.

I’m not sure how sensible this is. “Negative feedback circuits” aren’t necessarily inhibitory forces: they might hold one part of a system at stasis, but that might be necessary for another, larger part of the system to function. I am writing this using a computer that’s powered by electricity. The electricity first passes through a series of op-amps, rectifiers, and transformers to shape and regulate its power – ie, negative feedback processes. A PSU made of positive feedback voltage draws wouldn’t “exhibit ever greater autonomy”, it would instantly draw 220 volts from the wall and kill itself.

And it seems that much of Land’s “deterritorialization” requires reification of other sorts of territories. Capitalism might be an awesome disruptive force. However, it relies on laws, rules, concepts, codified language, etc. Are these not territories? What’s a dollar? How do you verify that I own this dollar? How do you stop me from spending my dollar twice? Unless you have fast and legible answers to these questions, the whole system falls down. A hundred thousand years ago, humans had absolute de-territorialization. It was an interesting period. But it wasn’t a technological singularity.

It’s possible these are stupid objections that would only be raised by a naïf. It cannot be emphasized enough that Fanged Noumena is not for the casual reader. Land will accuse something of being a “grotesque recapitulation of Kant’s compromise with onto-theological tradition” and it’s like a game of tennis where I can’t see the net – what compromise did Kant make? Where would I begin looking? Someone with more than a casual interest in philosophy would get more out of these essays.

Land would later become grouped into the “alt right” by journalists, but he doesn’t seem to take conservatism very seriously. He mocks religion and traditionalism frequently, and almost nothing in the book seems to fit into a left/right schema. Either his views changed, or he moderated them to avoid total censure at Warwick.

He opposes many fruits of the enlightenment – such as egalitarianism, democracy, and feminism and so forth – largely because he identifies them as the aforementioned “negative feedback”.   He lives in a world where technology itself is an agent. Technology itself as the agent. Or rather, the everything. The entire system. The soul. Can we decode? What does it want? What is it propelling us toward, if anywhere? Wherein lies the aggregate trend? Is there a point to understanding accelerationism? By definition, it’s moving too fast to understand.

Whenever its name has been anything but a jest, philosophy has been haunted by a subterranean question: What if knowledge were a means to deepen unknowing? It is this thought alone that has differentiated it from the shallow things of the earth. Yet the glory and also the indignity of philosophy is to have sought the end of knowing, and no more. And what if empowerment was a means to deepen weakness? – “Shamanic Nietzsche”

That would be a funny fate for humanity. Groping around in the dark, looking for a light…and finally everything becomes bright. It’s a train rushing down on us. Inescapable. Land wants to rip the bandaid off, and get it over with. If that’s what’s going to happen, then let’s let it happen. He wants those realities to become real.

The nice thing about accelerationism is that it doesn’t turn you into a drudge for any particular philosophy or social movement. I once read about an avowed communist who voted for George W Bush in the 2000 election. His reasoning? Bush would hasten the fall. That’s smart. Sociopathic, but smart. It’s also accelerationist.

Among the most personal pieces of writing in Fanged Noumena is “A Dirty Joke”. Nick Land relates a series of anecdotes that maybe give the strongest sense of where he’s coming from. The world of today isn’t much to write home about. Land’s allegiance is to the world of tomorrow. He wants the sky to go dark as soon as possible, by this or any means, and he doesn’t care what it takes to draw down the sun.