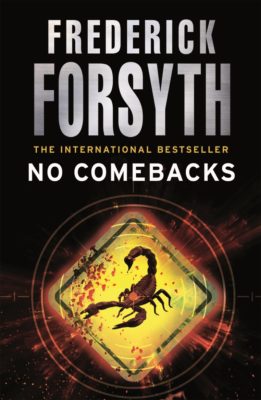 Imagine if you could combine different writers, the way botanists combine grafts of different trees. For example, David Foster Wallace’s lucidity, matched with Terry Brooks’ originality, Anne Rice’s brevity, Dean Koontz’s gritty slice-of-life realism, Harlan Ellison’s humbleness, Stephen King’s ability to really stick an ending, and Dan Brown’s prose. Writing involves several different skills, and no writer is a master of all of them. Reading a book often means enjoying one side of the author’s craft and cringing at another.

Frederick Forsyth is a dramatic example of this.  His prose, characterization, and thematic work are bad – some of the worst I’ve ever seen. But his stories are good.

They’re anchored by astounding levels of technical detail. Forsyth had superhuman research abilities. It’s not a figure of speech to say his life depended on them. He wasn’t a tinker or tailor, but at least he was a soldier and spy, and his later career involved flexing the fact-gathering muscles he’d built in the RAF and MI6 (as well as a lengthy career as a journalist in places like Biafra and Nigeria) and using them to write thriller novels.

The typical Forsyth story involves him pounding out reams of fascinating and believable technical detail on all sorts of things…while gingerly walking around his story’s human elements, like a man on thin ice.

The first story in his “No Comebacks” collection draws a highlighter over his strengths and weaknesses. A wealthy, amoral man falls in love with a married woman, and hatches a plot to have her husband killed. The romance scenes are terrible and barely register as such: Forsyth writes like an entomologist describing a strange insect mating ritual. But as soon as the contract killer plotline starts, Forsyth sparks to life. Here’s how you gather intelligence on someone; here’s how you find a hitman; here’s how you conceal a pistol inside a book, here’s how to modify bullets so they make less sound, and on and on. The quotidian detail builds and then sunders apart in a vicious snap.

“There Are No Snakes in Ireland” has more mismatched parts. A Punjabi medical student takes a job on a Belfast construction site, and is bullied by a racist foreman. He schemes up a revenge plot that’s substantially more complex than it has to be, and of course everything goes wrong (or right (or doubly wrong (or doubly right))). The story’s unreal fairytale quality jars against the mundane construction-worker aspects. Forsyth seems most comfortable when describing how to demolish a building.

“The Emperor” is a homage to Hemingway, featuring an exhausting, exhilerating struggle of man-vs-fish on the open waters. Everything around this is silly, particularly the cartoonishly awful wife. Forsyth doesn’t appear to like women much: they seldom feature except as murder victims, nagging shrews, criminal extortionists, and so on. The hero Murgatroyd, like us, happily forgets all of this as soon as he sets out to sea.

“There Are Some Days” is set in Ireland during the Troubles. A truck driver has his lorry hijacked by the Northern Irish mafia, who believe that he’s carrying a shipment of brandy. There are multiple misunderstandings and confusions, finally leading to the most effective twist ending in the book. It’s almost the story with the least humanity, it’s almost as if the lorry is the main character. Forsyth’s descriptions of a truck breaking down and being fixed are infinitely more absorbing than any of his romance plots.

“Money With Menace” is about a nebbish, shy man who seems to have come out of a Monty Python sketch about investment bankers. A sexual misadventure (that Forsyth wisely doesn’t try to depict at all) soon leads to an extortion plot. The tension is exciting, and the ending is spoiled in advance. Too bad.

“Used in Evidence” is about a silent old man who has finally been evicted from his squalid terrace apartment. It’s soon discovered why he didn’t want to leave – there’s a mummified human cadaver behind the fireplace. Has he murdered someone? It’s a blood-freezing tale, with scarcely a trace of humor. It’s very much like Roald Dahl’s stories for grownups, “The Landlady” or whatever.

“Privilege”, by contrast, is as light and insubstantial as a soap bubble. I guess Forsyth heard that you can’t be sued for anything you say in court, and thought he could write a story about this one detail and nothing else.

“Duty” is written in the first-person, with an cautious note from Forsyth that it’s not like the others. I didn’t find it to be that different. It relies on lots of quotidian detail for its effects, weaving together a plot involving mysteries, confusion, secrets, and ambiguous or mistaken identities. It doesn’t have the same knockout punch as “No Comebacks” and “There Are Some Days”, and it’s about an event so far away (both in time and place) from the narrative that it’s hard to care much. It’s like “experiencing” the movie Titanic in the form of two co-workers discussing it ten years after seeing it. Interestingly mainly for the day-to-day details about rural Ireland.

“A Careful Man” is about a dead millionaire who plays a prank on his hated inlaws from beyond the grave. Similar to The Wrong Box and many other squabble-at-the-graveside type stories. There’s more meat to it than “Privilege”, but it’s ultimately a similar tale, ending in poetic justice. The moral seems to be “the law is an ass, so why not go for a ride on it?”

“Sharp Practice” involves a judge who is cozened into a game of poker by a man who – by coincidence, just one day later – he has in the dock for running a card scam. An elaborate story, with Forsyth immersing the reader in poker and having it seem like a fascinating, self-contained universe. Terry Pratchett said that the secret to a magic trick is to know just one extra fact. Here, there’s one fact that the judge doesn’t know, and also one fact that the reader doesn’t know. A fun story, although I guessed the twist a few pages before it came.