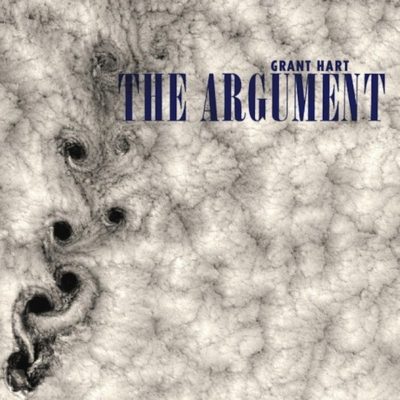 The Argument, Grant Hart’s final solo album, was released in 2013, four years before his death.

Hart deserved better than he got. Overshadowed both by Bob Mould’s pyroclastic distorted guitar chords and forceful personality, it was easy to see him as a lesser talent. But one day I took stock of my ten favorite Hüsker Dü songs, and about seven of them were written by Hart. From “The Girl Who Lives on Heaven Hill” to “She Floated Away” to his solo albums, he was a genuinely brilliant pop songwriter.

And he was weird. Bob Mould would never and could never have made The Argument.

It’s a 20-song adaptation of Milton’s Paradise Lost, based on a treatment by William S Burroughs. It sounds (and is) cheaply made, consisting of noisy guitars, synth loops, and found sounds apparently recorded around Hart’s house (such as a barking dog). Seldom has such ambition been realised through such humble material. Hart has created a tableaux of the Original Sin out of carpet fluff, dryer lint, and spilled breakfast cereal.

There’s not a trace of hardcore punk to be seen, and little alternative rock. It’s just Grant Hart’s stripped-back and heartfelt (Hartfelt?) songwriting, which always seemed to exist beyond influences. Sometimes the cheapness of the album works against it: “Morningstar”, for instance, features a loud programmed drum loop. It’s distracting, and all I can focus on. But far more often than not an entrancing mood appear. “Awake, Arise” is dire, and builds up like a thundercloud. It’s followed by “If We Have The Will”, a military march of painted toy soldiers written in 9/8 time. “Sin” goes heavy on the blues.

By the time “Letting Me Out”, “Is the Sky the Limit?”, and “So Far From Heaven” roll around,  the album is (metaphorically) on fire. None of these songs contain a single dull or uninspired moment. “War in Heaven” is woven from agonizing jagging synths and samples. “Underneath the Apple Tree” is focused around lyrical storytelling – Grant Hart’s devil is far more avuncular and likeable than the Rolling Stones’  or Marilyn Manson’s. The six minute title track is boring and can be skipped. But the album ends on a high note, the energetic and frantic “Run For the Wilderness”.

One of Hart’s goals for the adaptation was to remove explicit references to religion – a blind listener might not even make the Paradise Lost connection. Lyrically, the story jumps around a bit and is kind of out of order. I think he might have taken inspiration from CS Lewis’s The Screwtape Letters – you think you’re reading the demonic missives in chronological sequence, but the celestial method of dating need not overlap with that of mundanity.

But mostly, Hart hasn’t recreated the world of Milton, or Burroughs, or even Moses, but has created a self-referential cosmos that’s entirely his own. Obsessive, detailed, and tuneful: The Argument could be a concept album about its creator’s mind. Grant Hart is gone, but will not be forgotten. Hüsker Dü. Do you recall?