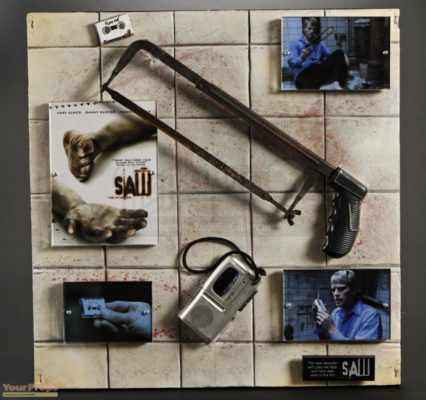 ‘The chain in those handcuffs is high-tensile steel. It’d take you ten minutes to hack through it with this. Now, if you’re lucky, you could hack through your ankle in five minutes. Go.’ – Max Rockatansky

One man chains another to a pipe in a burning building (or in some other place that will kill him if he doesn’t escape). He gives the chained man a hacksaw and a choice: cut through the chain, or cut through a limb.

This scenario appears in George Miller’s apocalyptic film Mad Max. It also appears in Alan Moore’s Watchmen (likely as a homage or parody), where Rorschach kills the sadistic pedophile Grice.

Hurling the dogs’ corpses at Grice, Rorschach then handcuffed the man to a pipe and doused the room with kerosene. After handing Grice a hacksaw and stating that it would be futile for Grice to attempt to cut through the handcuffs (implying that he would have to cut off his hand), Rorschach set fire to the room and exited the house. He watched outside for over an hour in the unlikely event that Grice might free himself in time; Grice did not survive. – Watchmen Wiki

It also appears in the first Saw movie.

Adam finds a bag containing two hacksaws inside the toilet, which they try to use to cut through their chains, but Adam’s saw breaks. Lawrence realizes the saws are meant to be used on their feet, and identifies their captor as the Jigsaw Killer, whom Lawrence knows of because he was once a suspect. – Wikipedia

It’s as brutal an act as one can imagine, but it has an element of chivalry (and moral exculpation). After all, the chained man has a chance to live. If he dies, it’s because he didn’t want it enough.

…Or does he? The man who chained you up a) wants to kill you and b) controls every aspect of the scenario you’re in. Would he give you a hacksaw if there was any way you could escape in time, however remote? Maybe he wants you to die in terrible pain, with a hacksaw buried in your leg.

This is such a weirdly common (and specific) trope in fiction that I started wondering when it first appeared. Where’s hacksaw zero? Is there an ur-hacksaw scene that predates all others?

I might have found it. Ironically, in a book that was never actually written.

The 120 Days of Sodom is the legendary and never-completed epic by 18th century aristocrat Marquis de Sade. Written on a single roll of paper while its author was imprisoned in the Bastille, its production was interrupted in 1789 by the French Revolution. Only the first part is extant: the second and third parts exist in outline form.

In the third part, we come across this scene:

“He chains one of the girl’s hands and secures the chain to the wall; he leaves her thus, without food. Near her is a large knife, and just beyond her reach sits an excellent meal: if she wishes to eat, she has but to cut through her forearm; otherwise, she dies of starvation. Prior to this he has embuggered her. He observes her through a window.”

This has some interesting parallels to Mad Max.

It has some differences.

There’s another big difference between this scene and its later incarnations.

Max Rockatansky and Rorschach are (dark) heroes. Even Jigsaw is given some odd philosophical motivations for his deeds. Nothing like this exists for the barbarous noblemen of Sodom, who have retired to a chateau in Germany to destroy as many young lives as possible. Their evil is a black hole, existing beyond any reasonable motive.

Another Frenchman, Jean-Baptiste Say, once said that supply creates its own demand. In the Marquis’s case, the same holds true for sadism. When men have knives, they use them.