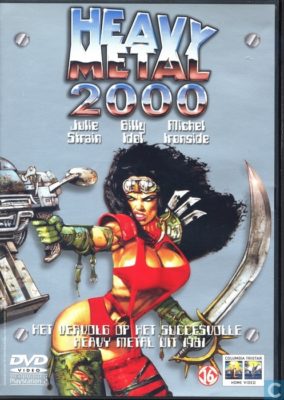 This isn’t good at all.

It’s barely even a movie: it’s like a long episode of Batman: The Animated Series featuring an occasional boob and a soundtrack of angsty, edgy mallcore. Music was shit-awful in the year 2000, and if you need a reminder, the first Slipknot album is shorter by thirty minutes, so listen to that instead.

What connection does it share to the original Heavy Metal? The title.

Instead of being an anthology, it contains a single bad story based on a graphic novel by Teenage Mutant Ninja Turtles co-creator Kevin Eastman. The plot (narrated by someone who was probably making dramatic hand gestures in the vocal booth), involves the Arakacians producing an elixir of immortality and a secret key lost in space and a villainous asteroid miner and a tertiary villain who’s a dinosaur and an xtreme grrl heroine and a second xtreme grrl heroine and a plucky comic relief character who later becomes a sidekick and is replaced by a different plucky comic relief and a plot MacGuffin and Guy DeBord and Roland Barthes and asdf

The film is overloaded with detail and characters, because it’s basically a 170 page graphic novel jammed into a VHS player with a shoehorn. The screenplay couldn’t have more holes if it was made of swiss cheese. Where does the villainous Tyler get the weapons he uses for the raid on Eden? Why do none of those futuristic space-guns appear in the final showdown, which is fought with spears and swords? Why does becoming evil cause your hair to grow twenty inches?

Action girl #1 is played by Julia Strain. She has boobs. She beats the shit out of people who look at her boobs. What more character development do you need? Tyler himself looks like Ruber from 1998’s dose of box office strychnine Quest for Camelot, and exemplifies the problem I have with almost all “crazy” cartoon villains (such as Batman’s Joker): he turns sane and calculating whenever the plot requires it. The result is a mechanical artifice of a film where you can feel the interference of the writer on every frame. Why do characters do anything in Heavy Metal 2000? Kevin Eastman wanted them to do it.

“Calculating” applies to the film in general. There’s none of the sense of liberty and freedom of the original – instead it’s like a cold-eyed gambler, hedging every bet.

A great example is the SHOCKING ADULT CONTENT…which isn’t integrated in any way to the story! 95% of the film is a bland Saturday morning cartoon, then we get a pointless splash of violence and nudity, then the movie becomes a Saturday morning cartoon again. This is obviously intentional: they set up the movie so they could quickly chop all objectionable content and get a PG-13 rating. The quislings.

The animation is TV quality. Suffice to say that 90s cartoons looked as shitty as 90s music sounded: Heavy Metal 2000 is dark, lacks contrast, and has the palette of an Excedrin headache. Enjoy your browns, grays, and khaki greens. This is like playing Quake, right down to the  underwhelming final boss.

This underscores the biggest offense Heavy Metal 2000 commits: it isn’t fun. Ren & Stimpy creator John Kricfalusi once said something (aside from “I thought she was 18, your honor”) that I find profound: animation’s strength is that it creates visuals that would be impossible with live action. If you animate visuals that are even more drab and bland than real life, you’re ignoring the possibilities of the medium. Heavy Metal 2000 doesn’t just ignore the possibilities, it hoists the black flag and directly repudiate them. What an ugly fucking film.

Heavy Metal was only barely successful. Heavy Metal 2000 went direct-to-video, and should have gone direct-to-landfill. It killed off attempts to bring Metal Hurlant to life for nearly another 20 years, before an anthology called Love, Death & Robots appeared on Netflix. I haven’t seen it and probably won’t: it’ll likely be a pandering joke full of references to Twitter and trans issues, with a villain called “Tonaald D’rump” or some shit.  Heavy Metal is a nostalgic look at the past. As such, it’s best left in the past. The world did not and still does not need another Heavy Metal.