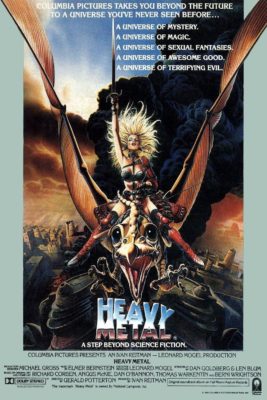 I decided to watch the 1981 animated film Heavy Metal because of its reputation.

Like Vegemite and the blonde German chanteuse on the first Velvet Underground album, Heavy Metal doesn’t have an especially good or a bad reputation; it merely has one.  It grossed $20.1 million on a $9.3 million budget, enough to be considered a mild hit but not enough for a sequel. It has 6.7/10 on IMDB and a 60% Rotten Tomatoes score (critics’ consensus: “sexist, juvenile, and dated”).

It’s based upon the Heavy Metal comics anthology, which in turn is derived upon Métal Hurlant, the legendarily explicit French outfit home to everyone from Paolo Eleuteri Serpieri to Moebius; the film adapts stories from the comics, which vary from erotica to science fiction to horror. The art style changes from segment to segment, ranging from itchy “realistic” rotoscoped footage to stuff that could be a Saturday morning cartoon.

I watched it once. It made an impression. I watched it again. I decided I really liked it.

Halfway through my third rewatch, I thought this is my favorite movie of all time.

Heavy Metal is spellbinding yet rationally hard to defend. I like it more than any movie I’ve ever seen, but what intellectual case can be made for it? It’s embarrassing. There’s actually a story about a dweeb who visits a fantasy world, gains huge muscles, and has sex with hot babes. The art is sometimes excellent but more often workmanlike. The “groovy, man” tone of the writing hasn’t aged well. If “auteurness” is important to you, this lacks the personality of a Bakshi film or the polish of a Don Bluth. I have no idea who the individual directors are, or what they did before or sense. So what does it have that makes it special?

It has heart. Sincerity. It throws itself before the mercy of the court and receives a pardon. Heavy Metal elicits the nostalgia-drenched emotions of a beloved childhood film that I haven’t seen in twenty years, but I first saw it ten months ago. How’s that possible? How can you be Pavlov’s dog and salivate before you hear the bell?

“Soft Landing” is a stop-motion music video depicting a Corvette falling from orbit and landing in a field.

“Grimaldi” provides the framing device: a glowing green orb called the Loc-Nar (“the sum of all evils”) hypnotizes a young girl and shows her visions of the devastation it has wrought across time and space. These visions form the remainder of the film’s shorts. I hate it when words seem like anagrams but aren’t, and “Loc-Nar” is such a word.

“Harry Canyon” is the hard-luck tale of a New York cab driver in 2031 (ten years away!), driving aliens and vaporising mugs. He gets tangled up with a pretty young moll who’s on the run from the local goon squad (representative line: “Here I was, stuck with this beautiful girl. I knew she was gonna be nothin’ but trouble”). Might be mistaken as a parody of noir crime, but Heavy Metal is too earnest to parody anything.

“Den” is an adolescent nerd power fantasy. Describing the plot in detail would cause me to break out in pimples and start expressing strong opinions about D&D 5th Ed, so I’ll just say that it’s charming and pleasant, with a wonderful final shot. Den has the voice (but not the physique) of John Candy.

“Captain Sternn”‘s eponymous hero is in a jam. He’s on trial for 12 counts of murder, 22 counts of robbery, 37 counts of rape, et cetera. He thinks he has a plan to get off the hook (no, it doesn’t involve getting a job in the TRUMP ADMINISTRATION, ha ha), but as usual the Loc-Nar appears and ruins everything. Entertaining but lightweight, “Captain Stern” is the only segment that could have been cut without dramatically worsening the film. But it’s cute.

“B-17”, by contrast, is horrific. The pilot of a WWII bomber is flying home after a sortie, only to notice that everyone on his plane has died. Or have they? Gruesome and unredeeming, it’s similar to the Aldapuerta short story “Ikarus”, as well as the Twilight Zone episode “Terror at 20,000 Feet”. Great art, and a sense of doom as thick as squid ink.

“Taarna” is an epic that closes off the film and resolves the story of the Loc-Nar. A peaceful people are on the verge of being slaughtered, and the warrior maiden Taarna rides to save them. It’s a heavily compressed version of a Moebius story, with continuity errors appearing at a rate of about two a minute (random example: how does Taarna get her sword back after escaping the pit?), but its flaws are obliterated by its grand, epic heft. The short evokes nigh-apocalyptic size: seeing this on a big screen must have been something. There’s some gorgeous panoramic shots of landscapes where every grain of sand seems to be animated – were computers involved? The final few minutes are a masterclass in color: bloody battles against an incarnadine sky, sickly green as the Loc-Nar makes its final stand, and a final shot of black splashed with faint colour: hope still exists, but you have to reach for it, into the stars.

Describing anything in Heavy Metal is a waste of time: all I can do is describe my reaction to it, which is beyond positive. Heavy Metal stands alone. It needs every concession ever made, and gets them. I don’t care if it objectively sucks, I don’t care if you think the comics were better: this is the best movie ever made by human hands.