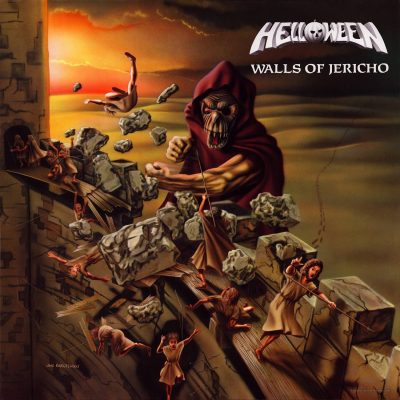 The first Helloween album is a classic of German power/speed metal. “Ride the Sky” in particular is one the most ripped-off songs ever. It was white-hot innovative in 1985 and still listens pretty well today.

On the back of albums like this, Germany was the dominant country for power metal through the 80s, 90s and 2000s. (In later decades it ceded space to Finland and Sweden, which is also when the genre stopped being worth listening to, for the most part). There’s a “Teutonic” PM style you can easily recognize: Judas Priest style songwriting with lots of 16th note picked-riffs, and “rough” vocals that are more enthusiastic than good. This regional style is highly distinctive: you can typically say “yep, this power metal band’s from Germany” a few seconds after the needle falls.

Kai Hansen and Michael Weikath go about 50-50 on the songwriting (most of the songs were written years earlier than 1985, for various proto-Helloween bands). Hansen’s efforts are stronger, probably because he has to sing them and better knows the limitations of his voice. “Ride the Sky” is an excellent opener, full of energy and riffs. (Also, is it the first known example of a power metal band rhyming fly with sky?) “Phantoms of Death” has wicked riffs and an excellent gang vocal chorus. It features a keyboard line, like a preview of the direction they’d take on their next album. Check out the Iron Savior cover, too.  “Gorgar” (which was written in 1981) has a silly, humorous tone: Running Wild and Blind Guardian certainly weren’t writing songs about pinball boards at this point. Helloween’s lightness set them apart from other bands – they weren’t serious about what they did, which sometimes helped them and sometimes didn’t. They have a lot of nerve crediting the intro track to “Weikath/Hansen” when it’s just the melody of “London Bridge Is Falling Down”.

Weikath’s songs are good but are all the exact same tempo (“Reptile” excluded), making them a slightly repetitive. “Heavy Metal” is a Scanner kind of song, and “How Many Tears” is rampaging and furious epic, running a bit long at seven minutes. Hansen’s voice just doesn’t work here – he sounds ragged and out of breath in the climactic chorus. “Tears” more than any song demonstrated that the band needed to find a dedicated singer.

There’s a few different versions of Walls of Jericho hanging around. The original 1985 Noise LP is the definitive version. The 1987 CD edition has a bunch of extra songs, but it doesn’t listen as well: “Starlight” is worse than “Ride the Sky”, and “Judas” and “Murderer” have the exact same chorus (the songs are tracklisted at opposite sides of the CD, in the hopes you won’t notice!) I really love “Warrior”. Hansen is in total command here. “Silent falls the hammer!”

Production values? What are they? You hear reverb-drenched Marshalls and not much else. Whenever the songs get fast or busy, the music kind of flies to pieces in your auditory canal like a pinata, but that’s much-loved tradition of Teutonic PM too.

(It’s also a tradition to have questionable band names. Helloween got its name because, as Hansen explained once, “Halloween comes but once a year, but you can have Helloween every day“. It’s actually one of the better names Germany has to offer: other bands include Chinchilla, Edguy, Pink Cream 69, and…ugh…Custard.)