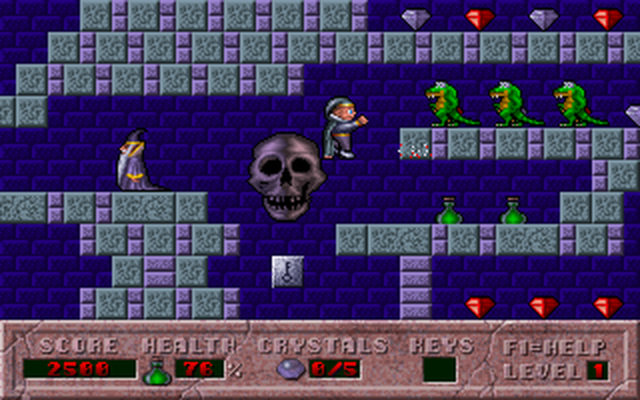 As the 90s increased in integers, you began to hear about “shareware”: a new game distribution model enabled by the internet.

Instead of purchasing a $60.00 box of air and praying the game was as good as it looked in Nintendo Power, you actually got to play the fucker before you bought it. Imagine that. Next thing, you were up all night, watching DOOM1_1.zip dribble down your dad’s 2400 baud modem.

For me, the best part of any gaming industry shakeup (whether it’s the internet, the dedicated graphics card, the CD drive, or just shifting tastes of game-buyers) is playing all the weird crap that is momentarily allowed to market. Apogee was emboldened by shareware to release a lot of odd titles – you got the sense that they were experimenting, seeing what would stick – and although Hocus Pocus isn’t that weird, it’s still not something that would otherwise get a big-boy distribution push.

Like many Apogee titles, it was a new IP created by an outsider (Mike Voss) who had little prior history in the gaming industry. Hocus Pocus is a side-scrolling platform game about a wizard who collects crystal balls. The gameplay is similar to a previous Voss game called Clyde’s Adventure, although Clyde has 16-color EGA and Hocus has 256-color VGA. You flip switches, ride elevators, fight enemies, and dodge intellectual property suits from Sega and Nintendo. The graphics are colorful, glossy and shiny, like someone sprayed the whole game with WD-40. The monsters and environments are visually creative.

Animation is a mixed bag. Some enemies have fluid movement, but your main character is a department store mannequin. Certain characters (like the wizard Terexin) have no animation cycles at all. Ditto for the audio in general. The music is half good, half unlistenable. The PEW PEW PEW of Hocus firing his magic spell drove me to muting my audio.

I played the shareware version of this quite a bit when I was five. I could still probably draw a map of the first nine levels from memory. When I revisit Hocus Pocus now, I like it less. It’s playable but there’s not much too it.

Various things grate at me. The game has basically three enemies with different graphics. The gameplay never varies. There’s the sense that you’re playing the same level over and over. Switch combination puzzles suck. The “jokes” sprinkled throughout aren’t very funny. Any serious platformer from 1994 stomps Hocus Pocus from the top rope – games like Jazz Jackrabbit, Earthworm Jim, Megaman 6, Donkey Kong Country…

I never bothered with the full version. Shareware had a dark side – usually the paid version was just the free version + some more levels + maybe a new weapon or something. Very few Apogee titles were worth getting in full (Raptor being a notable exception); in some ways, Apogee made arcade games for the PC. Remember how Mortal Kombat would always leave you wanting more at the arcades but as soon as you got it for a home console you’d be sick of it in five minutes. Same story here. Some games are best left at small doses.

As far as I know it works on Dosbox if you play without audio (no great loss). As was their policy, Apogee magnanimously allowed developers to retain the copyright on their IPs, and so Voss theoretically could have started a Hocus Pocus burger chain or something. He didn’t.