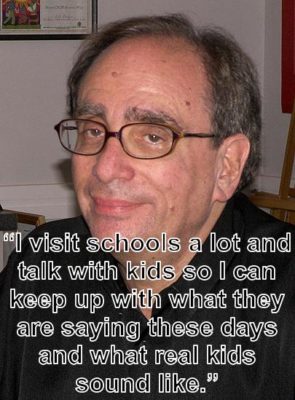 What’s worse than a subpar book? A subpar book that has one small saving grace, one small pith of goodness, that forces you to keep reading even though you’re not enjoying the overall experience.

This has happened to me twice, with two separate series’ of books. The first was RL Stine’s Goosebumps series, which I read when my age was one digit long.

These days RL Stine is a relic from the nineties, like koosh balls and Tamagotchies, but he was the JK Rowling of his time, a children’s author who sold freakish numbers of books in the face of conventional wisdom that kids don’t read books. His books were safe but somewhat edgy in that Paul Jennings/Morris Gleitzman gross-out way. If all the characters weren’t covered in radioactive green slime by page three, you tended to feel cheated.

Also, he once said “I visit schools a lot and talk with kids so I can keep up with what they are saying these days and what real kids sound like.” This is a quote that should be spread far and wide, because it’s hilarious.

Some of the Goosebumps books were actually good, and a select handful (like “The Ghost Next Door”) actually achieved a transcending pathos. Tim Jacobus always did a good job with the cover art. But after wading through sewage like “Deep Trouble II” and “Legend of the Lost Legend,” it became painfully obvious what was going on behind the scenes: a guy pounding out forgettable, near-identical books over the course of a few weeks with fingers calloused from cashing checks.

By age 9 I was sick of Goosebumps, reading them out of sheer inertia. How many books are there in the Goosebumps series? 62. How many did I own? 60 plus 2. I read many of the Fear Street, Goosebumps 2000, and Give Yourself Goosebumps books too. RL Stine was laughing his way to the proverbial bank with me.

The second series of books was Lemony Snicket’s A Series of Unfortunate Events.

You might have seen the movie. Back in the day, the books were marketed as Harry Potter books for goths, all doom and gloom set in a vaguely steampunk-inspired world. They were littered with obscure references, literary red herrings, and a set of tantalising subplots and mysteries (“VFD”, a sugar bowl, the author’s relationship to the children of the story) that seemed to grow and expand, barely out of sight. You got the sense that you were watching from the cheap seats as some vast conspiracy unfolded.

By book 7 or 8 I was beginning to suspect that the series was just a big shaggy dog joke, and that none of the mysteries would ever be resolved. I was right. In the final book (number 13) we get a cursory revelation that’s meant to explain everything, explains nothing, and makes no sense given other facts presented in the story (for example, the Baudelaires have heard a certain name spoken before, but they’ve never previously commented that it’s their mother’s name). After thirteen volumes it seems Daniel Handler got sick of dragging this pile of skeletons along and just dropped everything, unresolved mysteries and all. How frustrating.

And although Jim Carrey was a good Count Olaf in the movie, we all know that Edarem was tailor-made for the role.