I Hope They Serve Beer in Hell – The Movie 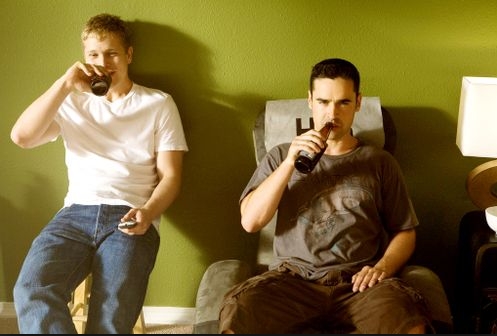 I like this. It’s frequently funny, and has some good acting. It’s flaws are the “good” kind of flaws, in that they are thought provoking more than irritating.

The movie revolves around three characters: Tucker, Drew (based on SlingBlade) and Dan (a composite of various Tucker Max friends), who go to a stripclub in Salem, lying to Dan’s fiancee in the process. Then begins a series of tragic misadventures where Tucker learns valuable lessons about how to…well, see for yourself. I’ll say this: the film avoids the classic ending where Tucker Max renounces his crazy ways and learns to be a nice guy. It does something more subversive and clever, while still allowing hope for the character.

The acting’s great. Matt Czuchry’s Tucker almost bounces with a likable energy – which he needs, because his role requires him to do very unlikeable stuff. The SlingBlade character is a misanthropic Napoleon Dynamite who sells every line of dialogue like he’s earning a commission. The interesting part of the movie isn’t the story, it’s the energy generated by the three male leads. IHTSBIH makes me feel the same way I feel about South Park – I don’t care much for its supposedly brilliant satire and social commentary, I just like seeing the four kids fooling around.

Unfortunately, the movie has issues. To be fair, so does Tucker Max, and those issues make him attractive to women. Doesn’t really work here, though. This movie’s issues don’t entice me towards buying it a drink, unless it’s a drink of acetone.

A lot of the lighting is pretty terrible. SOME scenes look good (like ones in the school). Others (such as the opening scene) look like they were shot by college kids on a rented Arri. How’d they fuck it up this badly?

But the main problem is the writing.

The dialogue doesn’t sound like something a person would say. It all sounds “written”. The road trip is a good example. SlingBlade gets hungry and goes on a monologue about the wonders of an American fast food chain (“…if you EVER speak ill of the Pancakewich again I will personally force-feed you one while I fuck you in the butt using the wrapper as a condom and then donkey punch you when the infused syrup nuggets explode in your mouth!”). Tucker Max fans will recognize this rant as a word-for-word recreation of a post the real-life Slingblade left on the Tucker Max Message Board. It’s funny in written form, but having an actor deliver it via monologue just sucks all the life from it. People don’t talk like that.

At one stage, Slingblade says Tucker will probably get AIDS, to which he replies “it’s basically curable. It doesn’t even show up in Magic Johnson’s blood any more.” Slingblade skips a beat and replies “so you’re saying Magic Johnson’s black…and has AIDS…and has it better than me?” …but Tucker didn’t say that. The quip wasn’t set up.

This movie made basically no money, which is a shame. At least Tucker stuck to his guns and retained creative control. I recall him saying in an interview that he would never give it to a Hollywood flack to make, because “there’s no chance he would do anything except fuck it up”. So instead, he kind of fucked it up himself. But would anything else be the Tucker Max way?