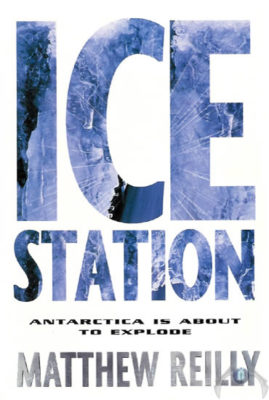 It’s an odd idea to write books for people who never read them, but it’s worked for Mr Reilly so far. Ice Station is a brutally fast-moving action thriller novel that seeks to be a movie on paper – probably one directed by Michael Bay.

Like all of Reilly’s work, it barely exists as literature: it’s a screenplay with cover art and an ISBN number. The typical paragraph is one line long. The typical adverb is “suddenly”. Descriptions are sparse and visual. There are comic book sound effects whenever someone has their head blown off, which is often.

The book stars US marine Shane Schofield, whose unit has been dispatched to a remote Antarctic research station (are there any Antarctic research stations that aren’t remote?). A metal object has been discovered in a 100 million year old layer of ice: it could be an alien spacecraft. Since nobody “owns” Antarctica, a number of foreign nations are attempting a snatch and grab mission to seize the discovery.

We get about forty pages of backstory (meaning, Reilly setting up dominoes so they fall in the most destructive way possible), then the action begins and never stops. Schofield ends up fighting French soldiers, British soldiers, his own unit, the environment, killer whales, frostbite, etc,

You could probably build an Antarctic research station from the combined metal of all the ejected bullet casings in this novel. The story’s so addictive and streamlined that it’s hard not to read in one go, in fact, experts say the average person reads at least seven Reilly novels per year in their sleep without realising it.

The obvious movie cliches appear: a nerdy scientist who plays Captain Exposition, a cute little girl with a pet, a traitor on the team, a rushed romantic subplot, etc. Reilly doesn’t know how to write anything except action, but it’s amazing action. A high-speed hovercraft chase and a tense battle in a killer whale infested pool particularly stick in the memory. He also knows the media his audience might be familiar with, and includes nods to Die Hard, Tom Clancy, Michael Crichton, and the X Files in all the right places.

Reilly’s plotting is often cited as incompetent, but it’s actually entirely competent – it’s just geared to something other than making perfect sense. Basically, whenever “cool” clashes against “logically plausible” (or “physicially possible”) cool wins. This is the Rosetta Stone to making sense of Ice Station.

For example: Schofield breaks a rib in this story. In the real world he would have great difficulty accomplishing some of his later feats in the story (such as swimming hundreds of meters), but that’s irrelevant. Reilly is the God of Cool, and sometimes he allows the mortals in his universe to break the laws of physics. Schofield needs to keep doing cool stuff, so he does it with a broken rib.

It would be funny to read a “self aware” hero who knows he’s in a Reilly novel (think Scalzi’s Redshirts). He’d try to stay alive by doing the most outlandish and ridiculous things possible. He’d dash to the nearest pet store and buy a cute dog. In fact, he’d wear body armor made of cute dogs stapled together: nobody would dare shoot a bullet at him. He’d also hire a plastic surgeon to make him look like an A-list Hollywood actor (Schofield’s physical description is a dead-ringer for Tom Cruise).

A realistic depiction of the story’s events would also make an interesting novel. Legally, Antarctica is not an ownerless waste, it’s a condominium – jointly owned by twelve nations. If an alien spacecraft was discovered, nobody would send special forces to capture it. Such a “capture” would be worthless – a huge metal object can’t realistically be transported or removed by twelve guys with guns, and it would stay in Antarctica, no matter who wins the shootout.

In Ice Station a group of bad guys hatch a plan to free the spacecraft (if that’s what it is) by detonating thermonuclear charges, creating a new iceberg with the spacecraft inside it, and steering the iceberg north to their sovereign territory. But then it would be pretty obvious what’s going on, and since the Antarctic treaty forbids the detonation or testing of weapons, you might as well declare war with half the world.

I read Ice Station at fourteen (the correct age), and it remains my favorite of Reilly’s work. It’s efficient, the prose is as tight as the wires in a Hong Kong action movie, and it avoids the goofy GI Joe cartoon feel that spoils some of his later work. It’s obviously nobody’s idea of a literary treat, but you don’t need spaceships to fly, and Ice Station proves it.