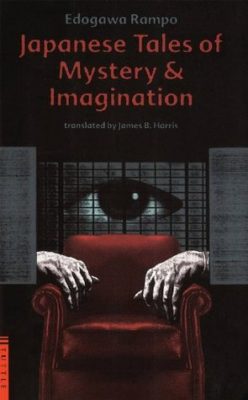 I wonder how much great literature we’re missing out on because of language barriers. Probably a lot. Whenever someone performs the task of hauling Japanese novels into the Western world, it’s like we’re being given a momentary glimpse into some ancient treasure room.

Japanese Tales of Mystery and Imagination is collection of early stories by Japanese mystery writer Edogawa Ranpo, as translated by James B Harris. As is always the case, Western terms like “mystery” fit him imperfectly. He is a thinker and a manufacturer of ideas. After reading this volume, my mind felt stretched, as if Ranpo had physically gotten in there and enlarged it somehow.

“The Human Chair” is astonishing, a bizarre tale about an ugly man who crafts a chair with a hidden space inside for him to sit. Finally, he can enjoy physical contact with beautiful women (unknowingly on their part), and he seems far better suited as a chair than as a human being. The story’s ending irritated me at first, but I’m now starting to believe it it merely clashes with my prejudices about narratives.

“The Psychological Test” and “The Twins” are dense and involved crime stories, told from the perspective of the criminal. “The Hell of Mirrors” dispenses with subtlety and unloads horror with both barrels, and manages to be as shocking and frightening as Poe classics like “The Black Cat.”

“Caterpillar” is the story of a soldier whose limbs have been blasted off his body and of the wife who cares for him. This was written ten years before Johnny Got His Gun but leaves a similar impact. Suehiro Maruo has made a fantastic manga adaptation of this story (check out Junji Ito’s take on “The Human Chair” while you’re at it). “Caterpillar” is tragic, not a story so much as a scenario that can only be followed to its inevitable unhappy conclusion.

But my favorite story is “Two Crippled Men”. Leisurely told and understated in tone, it is about a man who walks in his sleep…talks in his sleep…and eventually commits crimes in his sleep. The ending twists in a way that genuinely shocked me. This was the story where I began to believe that Ranpo is a genius.

Ranpo’s approach to these stories is very “Japanese”. Elegant, a bit baroque in his approach, but with a drive and focus that’s often surprising in its intensity. Someone should translate more. And still more after that.