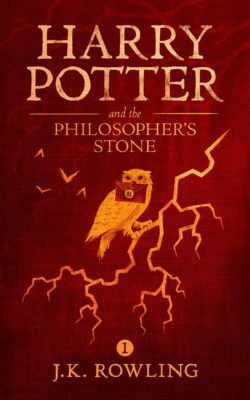 While walking in a desert, in the river of shade flowing between two dunes, you find a shape in the sand: a long stroke, capped at both ends by a much shorter stroke. What is it? Hard to say. It could be many things.

Then you find a second shape, a circle with a short, right-leaning stroke bisecting the lower right edge. It’s obviously the letter Q. Remarkably, you now recognise the first shape: the letter I. One shape is meaningless: two causes meaning to flood into your head.

The Harry Potter books were like that. Written by a single mother drawing a £70 a week welfare cheque, they weren’t an overnight success. You probably only heard of them after Book 3 came out, by which point it was impossible to not have heard of them.

Even after it became a global phenomenon, Harry Potter confused a lot of people, particularly your parents, teacher, and youth pastor. What sort of book lurked between the covers? The premise was easily understandable – boy discovers that he’s a wizard – but were they children’s books? Young adult adventures? Fantasy stories? Gateway drugs into black magick and the occult? Did you file Harry Potter next to Roald Dahl, The Saddle Club, or Aleister Crowley?

The first book’s marketing reveals this confusion. Would children buy books written by a woman? Better initialise her name, just to be safe (Harry Potter fans used to lord over the rubes by saying “Joanne Kathleen” as loudly as possible). Her American publisher thought that Philosopher’s Stone was dry and static, and released it as Harry Potter and the Sorceror’s Stone. They probably expected a turkey: the book was of near-unpublishable length (kids don’t read books that are 300 pages long) and it was also too British (American children won’t understand arcane Limeyland terminology like “ice lolly”, et cetera).

By Book 4, Harry Potter made a lot more sense. It was a heroic coming-of-age epic with elements of the fantastical. Being a new Harry Potter fan at this point was like tuning in to a song partway through the chorus – you tried to enjoy the moment while hastily backfilling your knowledge about the first three books. But for most of us, it was entertaining backfilling. Virtually everyone who reads the Harry Potter books all the way enjoys them greatly.

But to break butterflies under the wheel…what’s good about them, exactly?

JK Rowling has weaknesses as a writer: virtually every “he/she said” has an adverb clinging to it like a parasitic tick (“she said sharply”, “he said heavily,” “Harry said desperately”). When she describes something she provides cliche: eyes like dark tunnels, legs as thick as tree trunks. Her books (including this one) are often plotted around some piece of secret information that, once revealed, isn’t as interesting or important as its place in the story would suggest. Her worldbuilding is fun but unserious – nobody in a world of magic would need to wear glasses, for example, nor would they use flaming torches for light.

But she has strengths, too.

She has Evelyn Waugh’s ability to make anything funny or interesting: even if a character is sitting alone in a room, we get a wry observation about the room. Some passages are hilarious: I enjoyed rediscovering all my favorite lines in a recent re-reading. “Scars can come in handy. I have one myself above my left knee that is a perfect map of the London Underground.”

She also possesses Waugh’s talent for effortlessly establishing character. Sometimes it takes her a single sentence – “Mr. Dursley hummed as he picked out his most boring tie for work” – while sometimes she takes a little longer, like a boxer wearing down an opponent. The headmaster Dumbledore is a good case. When we first meet him, he seems like God, all-knowing, all-powerful, and all-benevolent. But in later books (and even a little in this one), his benignity is tempered with slight dishonesty. He is a man who might tell a lie, if he decides the truth is not in your best interests.

Much of Philosopher’s Stone takes place in a classroom, which enables JK Rowling to kill two birds with one stone (we get exposition and worldbuilding from a teacher, while whispered conversations among students advance the plot). The classroom scenes are the workhorses of the Harry Potter books, a delight to read, and it’s always a shame when one ends. Harry’s first encounter with Severus Snape, the sinister Master of Potions, is a masterclass in character dynamics: we clearly see his resentment of Harry, his desire to publicly humiliate him, and a shuttered past that Harry can’t possibly know about but has to bear the brunt of anyway.

“We clearly see” applies to most things in Harry Potter, because JK Rowling writes some of the clearest prose I’ve ever seen. Despite the convoluted plots, you always know what’s happening in Harry Potter. Granted, it might be “something mysterious” or “something Harry doesn’t understand”, but we always, always, always understand the action described on the page. George Orwell compared prose to glass: stained glass windows are pretty, but you can’t see through them. Good writing is like transparent glass, providing a clear window into the action. JK Rowling’s prose is 99% transmittance 9H tempered glass.

The first book is the roughest, and tonally the most unique. There’s more whimsy than the later ones, more surreality, and less adherence to logic (certain elements, like ghosts and paintings that talk to you, would hang uneasily in dramatic stories were death is supposed to be final). You can see all the roads the Harry Potter books could have gone down, from Dahl to Amis to Milne. Perhaps JK Rowling herself was still uncertain about what Harry Potter was, but it was very clearly something.