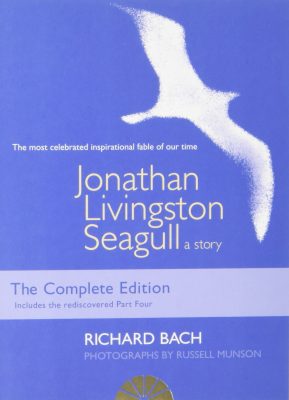 There are books that don’t sound real.

“A parable from the 70s about a seagull who wants to fly fast. He strives day and night to set new speed records. The others gulls make fun of him, but he never abandons his dream. Finally he dies and goes to heaven, where he attains perfect speed.”

The book sounds like a parody of banal inspirational literature.  “The author must be a Holocaust survivor” was my thought while reading it. “Or a child abuse survivor. Or a something survivor. That’s the only way this got published: on the back of a very sobby sob story.” I was wrong, Richard Bach was an aviator turned technical writer, and Jonathan Livingston Seagull took wing entirely on its own merits.

There’s a thing called “irony poisoning”, where detachment is used as a weapon against criticism. “Didn’t laugh at my joke? Well guess what, dumbass, I never meant it to be funny.” Jonathan Livingston Seagull has the reverse problem: sincerity poisoning. It’s painfully earnest, solemn as a hymn, and blind to its own ridiculousness.

Why is the seagull called “Jonathan Livingston Seagull”? Why is his surname his species? Can seagulls smile (as they do here, repeatedly)? How does he always know his exact velocity and altitude? It doesn’t even make sense to ask questions like that: the book exists in its own world.

Sometimes this works. Bach’s story choices create a weird and dislocative mood, and you go along with Jonathan Livingston’s odd adventure. At times it approaches CS Lewis’s vision of a fairytale for grown-ups.

At other times I agree with Roger Ebert’s pan: “a book so banal that it had to be sold to adults; kids would have seen through it.”.

One problem is that seagulls can’t actually do much. Jonathan just flies, and flies, and flies, setting pointless speed records over the ocean that nobody will remember, think, or care about. This is a metaphor for following your dreams and believing in yourself (along with some Christian/Buddhist spiritualistic hippie mumblecore), but the meaninglessness of it all makes his quest tragicomic, not inspirational.

The book has three sections (dealing with Jonathan’s life, adventures in Heaven, and return to Earth). In 2013 it was reissued with a fourth part, which is set hundreds of years after Jonathan Livingston’s life. The flock that rejected Jonathan now reveres him as a spiritual figure, but has buried his teachings in stultified ritual and cant. This is satire about organized religion, and seems to have been created reactively to silence critics who found the book pointless (not so – apparently it was written concurrently with the first three). It’s more interesting, but also less sincere.

The book is slim and could have been slimmer. Photos of seagulls pad the pages. Specifics about angles of descent and wing profiles about are endlessly elaborated, to soporific effect. It’s like reading a book by an autistic child whose special interest is the airspeed of birds.

From a thousand feet, flapping his wings as hard as he could, he pushed over into a blazing steep dive toward the waves, and learned why seagulls don’t make blazing steep power-dives. In just six seconds he was moving seventy miles per hour, the speed at which one’s wing goes unstable on the upstroke. Time after time it happened. Careful as he was, working at the very peak of his ability, he lost control at high speed. Climb to a thousand feet. Full power straight ahead first, then push over, flapping, to a vertical dive. Then, every time, his left wing stalled on an upstroke, he’d roll violently left, stall his right wing recovering, and flick like fire into a wild tumbling spin to the right. He couldn’t be careful enough on that upstroke. Ten times he tried, and all ten times, as he passed through seventy miles per hour, he burst into a churning mass of feathers, out of control, crashing down into the water. The key, he thought at last, dripping wet, must be to hold the wings still at high speeds — to flap up to fifty and then hold the wings still. From two thousand feet he tried again, rolling into his dive, beak straight down, wings full out and stable from the moment he passed fifty miles per hour. It took tremendous strength, but it worked. In ten seconds he had blurred through ninety miles per hour. Jonathan had set a world speed record for seagulls!

Being the world’s fastest seagull is only slightly more interesting than being the world’s fastest tapeworm, but this is the personality type the book appeals to: the pointless striver. The person who thinks that effort, in and of itself, is valorous. Jonathan Livingston Seagull is the battle hymn of the writer who can’t spell, the tone-deaf singer, the 5’2 wannabe pro basketball player, the aging LA actress who mails decade-old headshots to every agent in Hollywood. “Follow your dreams,” it says “no matter how unlikely – or pointless – success might seem.”

In the real world there’s a dark side to dream-following. Athletes cripple their bodies, entrepeneurs bankrupt themselves (and their partners and families), and naifs are exploited by scammers. Sometimes it’s necessary for a dream to end and the book doesn’t ever confront that possibility. Jonathan Livingston only wins. He wins so much he gets tired of winning. He barrel-rolls past every obstacle, breaking even the laws of physics, proving every doubter wrong. It’s pure wish fulfilment pornography, endearing and toxic. It takes twenty minutes to read and will ruin your entire life if you let it.