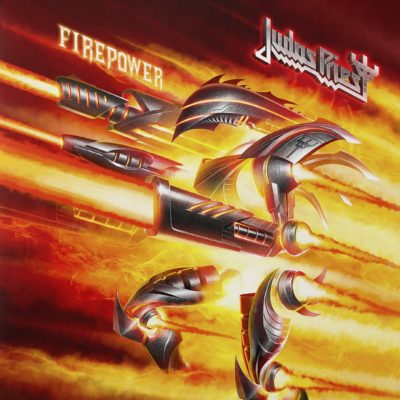 Remember how people said that Judas Priest is old? Obsolete? Yesterday’s news? Irrelevent? Remember how this was thirty years ago?

Judas Priest is now so cartoonishly old that it’s difficult to know how to relate to them. They formed a year before the first Black Sabbath album, and their story encompasses every single rock cliche in the book. The young, scrappy upstarts (the first album), the creative prodigies (the next few), the complacency and artistic rot (the few after that), the inspirational rally (Screaming for Vengeance and Defenders of the Faith), the immediate collapse into self-parody (Turbo and Ram it Down), the even more inspirational comeback (Painkiller), the years in the wilderness following the loss of their singer (Jugulator and Demolition), the awkward picking up of pieces (Angel of Retribution), the self-indulgence Spinal Tappery (Nostradamus), and now we have their eighteenth album, Firepower, for which no storyline seems to apply.

The album’s firepower risks being overshadowed by the fireworks happening behind the scenes. Glen Tipton simultaneously revealed that a), he will not be touring with the band, and b), that he has Parkinsons, thus precipitating a). Additional controversy was provided by former guitarist KK Downing, who started rumors that Glen didn’t even play on the album. You know there’s a problem when your gay singer isn’t the most dramatic person in the band any more.

Firepower is hard to draw a bead on. On one hand it embraces nostalgia, mostly for the band’s Killing Machine and Painkiller sound. The title track and “Evil Never Dies” are both quite fast, and feature a downtuned approach to the angular E minor riffing that characterised Painkiller. But “No Surrender” and “Firepower” are quite consonant and radio-friendly, to the point of sounding like something from Rob Halford’s solo albums.

There’s no experimentation, and little blues (which is something I’ve always wanted Priest to revisit).

This contrast is found in the production job, which finds the band’s venerable early producer Tom Allom paired with veteran of the loudness wars Andy Sneap, who brickwalls Judas Priest relentlessly and leaves the listener little room to breathe among the overcompressed guitars. The overall package is entertaining and powerful, and even benefits a little from its fetishistic excess.

I wish it was shorter, but I also can’t pick which songs should be cut. They all have appealing moments, and good performances. Special attention must go to Halford, who sounds ridiculously good. The credits assure me the band still has a bass player, and I will take them at their word. Glen Tipton’s soloing (if it is really him) feels a little compromised. Probably the worst case is “Necromancer”, where he sounds like he’s wearing oven mitts. Ritchie Faulkner is more confident and poised, and strangely now one of the stronger points of the band.

As the final notes of “Sea of Red” fade like a bleached photograph, I’m left with a strange feeling: that this will never end. Judas Priest have always depicted fantasy in their lyrics and album covers. Perhaps the most fantastical was Stained Class, which depicted an android with a projectile embedded in its head. It’s not fantasy because of the android. It’s fantasy because it suggests Judas Priest can die.