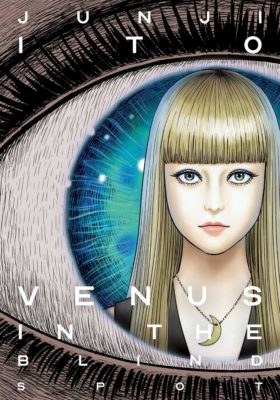 A collection of shorts from everyone’s favorite dentist, Junji Ito.

It’s an English release of The Best of Junji Ito, which was collected in 2019 by Shogakukan Big Comics Special. It’s the same basic idea as Metallica’s Garage Days Re-Revisited – odds and ends that don’t fit anywhere. Four stories are bonuses from Gyo, Remina, and Black Paradox. Three are adaptations of prose works from Edogawa Rampo and Robert Hitchens. The rest is previously uncollected material. It’s not clear why these particular stories were chosen, or why others (such as “Mystery Pavilion”, “Phantom Mansion”, etc) were missed.

“Billions Alone” – 2004 Junji Ito stares into a crystal ball and perfectly predicts the world of 2022. People are forced into isolation by a sinister force that kills them when they gather together. You’ll think of COVID19, of course, but the corpses-stitched-together visual could be an equally good comment on social media, which erupted like a cancer years after the story’s release. Spot the panel that inspired The Human Centipede.

“Venus in the Blind Spot” – a sweet, weird story about a girl who vanishes from your visual field when she gets close. It’s a Tomie story with less gore, reprising Ito’s usual themes of madness, desire, female beauty, and perception. It would be a good introduction to his work.

“The Enigma of Amigara Fault” – chilling story that makes my skin try to crawl off my skeleton, even now. A landslide reveals human-shaped holes in a mountain, which some people try to enter. A really effective and sharp story body horror and claustrophobia. Overall, Uzumaki is Ito’s greatest manga, but if you want to sharpen his entire career down to a thirty page highlight, this is it.

“The Sad Tale of the Principal Post” – a man gets trapped underneath a pillar upholding his house. Nobody online seems to understand the story, but it isn’t that confusing. It just takes a common metaphor (a father supports his house!) and makes it literal. More a joke than a story.

“The Human Chair” – Rampo’s 1925 story (about a carpenter who installs himself in a hidden compartment in a chair so that he can feel women sitting on him) is a classic of Japanese horror. To experience this much voyeuristic sexual perversity you’d have to be a girl riding the Shinkansen. Although it shares a title with this classic tale, Ito’s story is more of a sequel, continuing and expanding the plot.

“Master Umezz and Me” – a very personal story where Ito discusses his fannish obsession with Kazuo Umezu, the godfather of Japanese horror manga. Umezu (who, by the way, is 85 years old and announced the launch of a new series this year) is so different from Ito that it’s always surprised me that he drew inspiraiton from him. Aside from some vague surface similarities (“supernatural immortal girl” = Orochi/Tomie, “kids surviving in a hostile wasteland” = The Drifting Classroom/Uzumaki vol 3, Bible-style apocalypse where mankind is punished = Fourteen/Remina) their work is nothing alike. The story’s a heartfelt and affectionate tribute. Sometimes we forget what it’s like to be a kid who enjoys something: it’s a pure, heliumlike joy seldom recaptured in adulthood.

Parenthetically, does Goodreads sell a licensed crack pipe that you’re supposed to light up before writing reviews?

“Viz Media’s blurb for Venus in the Blind Spot is really weird: it claims this is a “best of” collection of Junji Ito’s stories but, as far as I can tell, only one – maybe two – stories have previously appeared in print before: The Enigma of Amigara Fault and The Sad Tale of the Principal Post possibly both appeared in Dissolving Classroom. So this is a “best of” collection that features almost all-new stories!?”

Ito should make a manga about this person’s mind. It’d be his scariest work by far.