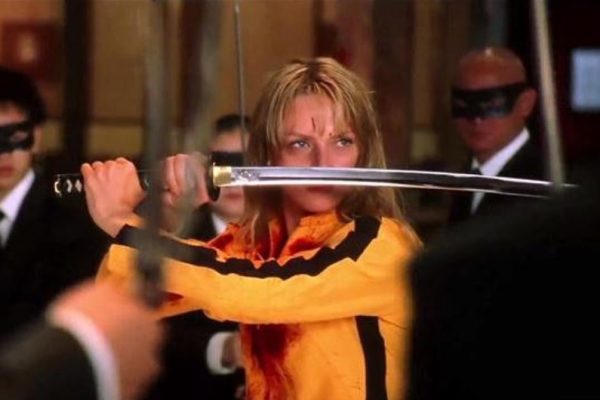 A single long movie that was split in two because Harvey Weinstein wanted to fuck a potted plant that day (I don’t know). On the surface it’s a movie about kung fu/grindhouse/western tropes of revenge, but equally, it’s about the technique of moviemaking itself. The closest parallel is watching an artist who puts paint on canvas with such consuming skill that the act of watching him paint is as fascinating as the actual painting.

Kill Bill is ingenious, and one of the stronger Tarantino works. There’s hardly any story. From beginning to end, the movie wants to thrill. It’s just cool visual, cool setpiece, cool dialog moment, with only tenuous ligatures of plot and motivation in between. It’s all delivered with ease: some movies try so hard that they seem to sweat, while Tarantino’s, whether good or bad, all have an effortlessness to them. Only later (or upon rewatching) do you become aware of how hard certain parts must have been to film. Although a shorter one-movie version of this would have been stronger, it’s good to live in a world where any form of Kill Bill exists.

Witness the opening scene, which goes from 0 to 100, 100 to 0 (when Vivica A Fox’s daughter interrupts the fight), then 0 to 100 again – sudden gear-changes that have devastating effects on the viewer. The staging, and blocking, and so forth is cartoony as hell, and this almost seems like an effect. There’s an animation technique called rotoscoping that consists of artists painting cels over live-action film. Kill Bill almost looks like reverse rotoscoping, with live actors playing at being comic drawings. The exaggerated swooshes, bangs, and music stabs add to this effect.

But it’s uneven in places. Vol I is much the stronger half. Most of the classic Kill Bill scenes are here – the animated sequence, the House of Blue Leaves sequence, the final boss battle. The climax is absurd beyond absurd, but it’s directed with a slaughterman’s eye for weight and mass, with blood spraying and limbs falling convincingly. Everything makes sense and can be followed on the screen. The decision to film everything “practical” was the right one – watch the Crazy-88 fight and infamous “burly brawl” scene in the second Matrix film (the only comparison I can think of) and the Wachowski film looks like Pixar.

I enjoy Vol II less. It has a slower pace, which allows for some fun Coen Brothers-esque character moments (a lethal assassin who winds down his days cleaning toilets in a strip club), but much of it’s clearly filler, stretching out a too-short movie. Kill Bill was chopped in half, and due to the way the plot is structured, it couldn’t be chopped in half. Most of its skeleton and organs ended up in Vol I. Vol II contains a lot of mush, with about seventy or eighty minutes of movie mixed in.

And it’s visually less appealing. The first part looks drab and overstays its welcome – it feels like we spend a million years in some asshole’s mobile home, and when the Pai Mei flashback sequence occurs, it’s a relief to see some color on the screen again. And it doesn’t really try to recapture the first film’s excesses, which is a shame. There’s 2-3 fights and they end pretty quickly, with only the Elle Driver battle arousing much interest (it also contains the best eye-gore scene since Lucio Fulci retired). And the more grounded tone doesn’t always work to the movie’s advantage. It invites logic into the proceedings, and logic is Kill Bill’s antimatter. “Wait, why is the Bride allowed to carry a samurai sword with her on the plane?”

I enjoyed David Carradine, though. I guess you could say he has a stranglehold on the movie. There’s a lot hanging on him, and its good that he doesn’t choke during his performance. The film really breathes during the moments he’s on screen. I’m glad Tarantino gave him maximum airtime, and didn’t leave him dangling.