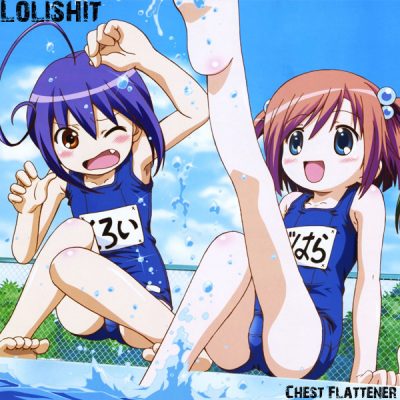 I’m swimming against the tide of popular opinion here, but I just don’t think pedophilia’s that great.

Like, academically speaking, what’s the sales pitch? Date someone with no money and no car? Someone who needs help with their homework and thinks PAW Patrol is the shit? No thank you.

Lolishit is a breakcore act. No idea who’s behind it. Probably the FBI. To explain, a “loli” is a very young (usually prepubescent) girl. A “lolicon” is a (usually male) person with an affinity for lolis. These are Japanese words – things the West regards as horrible misdeeds become almost acceptable when translated to Japanese, just part of the Oriental mystique. Japan just had its birthrate drop to 1.36 children per woman. Considering how obsessed they are with young girls, they don’t seem keen on creating any more of them.

Chest Flattener is the kind of cultural artifact that basically never existed before the internet. “Schoolgirl With Hair-Drills” kicks off the album with 180bpm breakbeats that chop like machine gun bullets. Everything is rhythm and groove. The only (slight) hint of melody is the shrieking, cut-up vocal samples from some anime I can’t recognize.

The other songs are the same. “MOEXTONE” is a speedcore/extratone track that sounds like it has a four digit bpm. Occasionally there are quotations from anime’s mash-up scene (Touhou, etc). “Deaf to All but the Misao”, for example, has a synth line highly suggestive of ZUN’s “UN Owen Was Her”.

Chest Flattener provides little ammunition for the critic. After 16 minutes, the album ends, and there is silence. It’s hyper-aware and deliberately disposable, and seems to have been created with a sneer. It’s not totally dashed off rubbish, but this isn’t music that was slaved over for months and months, either. It lives in the moment. Dies in the next. It’s froth, sparkling as it disintegrates. It’s memes set to music, yelling loudly because it will be forgotten tomorrow.

It combines a few different things – internet irony poisoning, anime mash-ups, the calculated pop-transgression of Shintaro Kago or Yandere Simulator, underground breakcore – and packages it all up under a “cover” that’s probably a picture stolen off Danbooru. If anything, Chest Flattener reminds me of a “metal” “band” called Sloth. They formed in the early 90s and were an actual sludge metal band, with albums and a label and so on. In recent years they have morphed into a terrible noise project run by an insane person. Under the Sloth name he’s released hundreds (if not thousands) of Bandcamp-only “singles” containing blasts of random distorted noise, with pornographic covers and titles like Sharing Treats With The Cat Is Where It’s At ‎.

Sloth is the maximal endpoint of Lolishit. Basically, if music like this ever appears on your radar, it’s a sign that you’re spending too much time online and may want to quote touch grass unquote as the kids say now. Add it to a playlist and let the government add you to a watchlist.

(NB. Lolicons are not pedophiles. Why would you even think that? Their favorite loli is actually a 1000-year-old demon, or an android. Lolicons spend 10% enjoying lolis and 90% of their time lawyering excuses for enjoying lolis.)