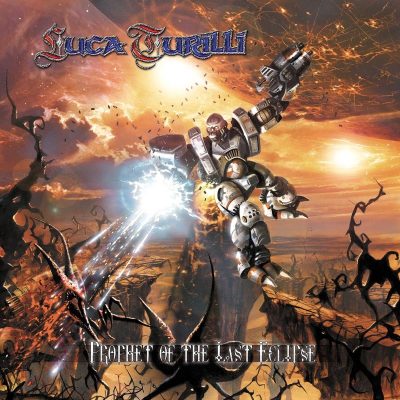 Luca Turilli is an Italian “shred” guitarist known for playing symphonic power metal: a fact you might not guess from reading his Wikipedia page.

Having always declared to love music at 360 degrees, Turilli has dedicated himself to multiple musical genres, ranging from trance and electronic music of his first compositions to symphonic metal inspired by the world of soundtracks and also to modern pop and piano compositions of his current productions.

I like how you find, quietly inserted in the middle, the thing that encompasses 95% of his work and the reason he’s famous. It’s like describing GW Bush as an “artist, author, philanthropist, public speaker, bicyclist, politician, and dog-lover”. There’s burying the lede, then there’s putting it in a lead-lined coffin. I respect not wanting be constrained by expectations, but give me a break: nobody hears “Luca Turilli” and thinks “trance music.”

Turilli isn’t the only power metal musician to enroll himself in the witness protection program (heard anything good from “heavy rock” artist Jorn Lande lately?). It’s an uncool style of music to make or listen to, particularly Rhapsody of Fire’s brand of it. Look at it this way: they have fourteen albums, which have a total of eleven dragons on the covers. That’s just too many dragons. Their Dragon-to-Cover ratio is 11/14, or 0.785, one of the highest ever reported.

Rhapsody of Fire was a great band, but also a punching bag. To many, their songs symbolized all the worst traditions of European power metal: riffless, orchestra-layered “conceptual” cheeseballs about a cave troll called Trarg. Luca Turilli was definitely the bandmember who chafed the most under the “flower metal” designation (as well as the D&D fantasy-style marketing enforced by their various  labels), and when he became a solo artist he couldn’t throw that stuff in the trash fast enough. Luca Turilli has seven solo albums, zero of which have dragons on the cover, giving him a D-t-C ratio of 0/1 and 0%.

But that’s what I find interesting about Turilli: the fact that such an important pillar of the power metal scene does not particularly like power metal. Maybe that’s the reason I enjoy him: he’s not Hammerfall or Dream Evil, turning the crank, producing bland genre worship until the day he dies. He wants more. He wants to progress.

Prophet of the Last Eclipse is a solo record he recorded in 2002. It’s possibly his masterpiece. It’s wildly original, filled with hooks, imagination, and a sense of wonder. There’s nothing wrong with it. The musicianshp

The electronic and film score elements are the first thing. Carmin Burura meets The Matrix vocals of “Aenigma,” or the pulsating glitched-up take on Italian operatic pop (?!) found in “Zephyr Skies Theme”. Nothing sounded like this in 2002.

Most of the album is fast, with “Rider of the Astral Fire”, and “Age of Mystic Ice”, and “New Century Tarantella” rampaging along like Rhapsody of Fire in full speed mode. Even here, there’s curveballs. “Rider of the Astral Fire” has a comical a-capella vocal section that sounds like a Danny Elfman soundtrack, and “New Century Tarantella” does for Italian folk music what Angra did for Brazilian tribal music.

Those are the worst songs on the album, by the way.

“War of the Universe” is an arresting and immediate opening track, with great melodies and a propulsive feel. Turilli likes writing epics, but he never goes wrong when he writes for the 4:00 minute mark, either.

“Demonheart” is savage and corroded, almost industrial metal in places, but with tons of speed and an addictive chorus. Olaf Hayer turns in another great vocal performance here.

“Prince of the Starlight” is the fastest song, and the second most formally elaborate. Helloween-style dual harmonies exist alongside Baroque cadences, electronic flutters, and a progressive jazz-sounding piano part. Often, Luca’s guitar parts are treated with phaser effects, and seem to needle and drill like laser beams bracketing a target. Alien-sounding, yet accessible.

But none of these are the greatest composition Prophet has to offer. That would be the 11-minute long closing track, “Prophet of the Last Eclipse”. After an eerie vocal intro, Turilli hits the afterburners hard, with fragments of shouted Latin (in mezzo-soprano and tenor vocal parts) swirling like leaves in the wake of drummer Robert Hunecke-Rizzo’s double-bass blast. The song is relentlessly heavy and crushing, delivering agitated verses and an immense chorus, before an extended guitar solo section, and then a final implosion into neotonal free-time music. I don’t know if this is the best song Turilli ever wrote. I do know that no better one came to my mind before I finished this paragraph. Requiem aeternam dona eis Domine: et lux perpetua luceat eis.

The limited edition of the album from Limb Music is worth getting. “Caprice in A Minor” is just filler – cool if you’re into classical music, I guess.  “Autumn’s Last Whisper” is an Icelandic neofolk ballad (with vocals from Rannveig Sif Sigurðardóttir) that sounds like it wandered in from a CD in a totally different aisle. But then there’s “Dark Comet’s Reign”, which is a monster of a track. It could have easily swapped places with one of the lesser uptempo songs on the main album release.

If you’re in the “power metal fan who’s becoming bored and jaded” group, this is (and has) everything you could possibly want. It’s over two decades old but still sounds fresh and forward looking. It’s as monumental and as well-constructed as an aircraft carrier: even in the lesser songs you’ll marvel at how tight and punchy the snare is, for example. I find this album infinitely more interesting than the post-Luca Rhapsody albums, or horrendous ripoff bands like Twilight Force. Who knew that trance musician Luca Turilli was capable of something like this?