Max Magician and the Legend of the Rings 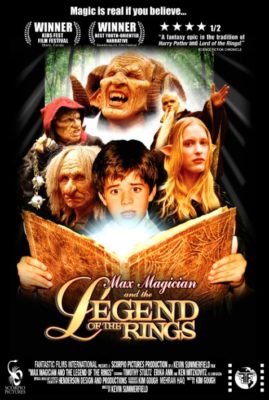 A “mockbuster” is a low-budget ripoff of a famous movie designed to trick you (or more likely your grandmother) into buying it. Major Hollywood films can have print and advertising budgets in the range of hundreds of millions of dollars, and just like harmless moths copy the markings of venomous wasps, a well-designed fraud can exploit another movie’s publicity blitz without spending a cent in advertising itself. A rising tide lifts all boats, but it also lifts turds.

Mockbusters are frequently masterpieces of surrealism. Their only desire is to be safe and generic, but they always feel uncomfortable, creepy, freakish, and strange. You might say they follow the rules so hard they break them.

2002’s Max Magician and the Legend of the Rings is an archetypal mockbuster. It wears its can’t-fail concept on its sleeve (or cover): Lord of the Rings was making money, Harry Potter was making money, so if you combined those things into one movie, then hell, you’d make money squared. Money times money. Hopefully this plan worked, because the director clearly had crack debt times crack debt.

What he didn’t have was a budget, actors, set designers, producers, or writers. Nobody involved in the movie seems to know what they’re doing, and some actually appear to be held on set at gunpoint. The result is an experience that has to be seen to be believed: a disastrous collage of fantasy cliches whose shamelessness is matched only by their incompetence. You feel genuine embarrassment for everyone in the zoning district.

Story? A young amateur magician called Max Majeck (you just heard the movie’s funniest joke, by the way) finds a doorway to a fantasy world under attack by a guy in a Ren Faire costume. Max saves the day by reading incantations out of a magic book, unleashing awesome spells such as “slowly levitate a few sticks of wood” and “cause several mice to appear on the villain’s shirt”. Watch out, Stephen Strange.

Everything about the movie is misjudged, including the decision to make it at all. The “fantasy realm” is clearly the woods outside someone’s house. The movie introduces an old, wise mentor character, forgets about him, introduces a second old, wise mentor, and then forgets about him. There’s a character called “Mr Tim” who refers to his wife as “Mrs Tim”, probably because it was too much work to come up with a woman’s name.

Like any truly bad movie, it’s actually hard to critique: it’s a firehose of awfulness overwhelming any cogent attempt to analyse it. An example of the rollercoaster ride the film takes you on: there are elves. They have pig ears. The pig ears don’t match their skin tone. The queen of the elves is played by the same actress who plays Max’s mom. She speaks with the same Midwestern accent in both roles. I literally can’t focus on any one thing because there’s always something worse distracting me.

But the audio stands out as exceptionally horrible. The music is completely inappropriate, sounds like it came from a free stock library, and was queued into the film by a deaf person. Countless lines of dialog are dubbed, suggesting that their original audio was spoiled somehow. They must have rewritten the dialog too, because the lips generally don’t match the voices.

I have to correct some misunderstandings the internet has about Max Magician. The first is the claim (featured on IMDB) that “There are no rings.” No, there are rings in this movie. Mr Tim’s book references magic rings. Dagda steals a green ring from Queen Belphobe.

The second misunderstanding is that it’s just a ripoff of Lord of the Rings and Harry Potter. That undersells the film’s ambition: it also rips off The Chronicles of Narnia (the talking mouse character + the children travelling between world plot point), The Neverending Story (the enchanted book), and Jim Henson’s Labyrinth (the goblins-bickering-in-the-closet scene at the end.)

It’s fairly good “make fun of bad movies” fodder. I suggest going into Max Magician armed with a few facts about it’s production, such as the fact that the weapons are literally pool noodles, or that the talking mouse Crimbil is portrayed by two different mice after the first got eaten by a snake. (You can notice this on-screen because the two mice don’t quite match in color: OG Crimbil is slightly gray, while Emergency Backup Crimbil is slightly brown. Can you identify which scene contains which Crimbil? This could be a drinking game. )

Mockbusters are designed to be disposable. Strangely, this one picked up a second life after pop culture commentary Youtube channel Red Letter Media tried (and failed) to review it. Their video was corrupt and displayed 86 minutes of static. I think my video’s corrupt, too. It displays 86 minutes of shitty movie.

(Ironically, “mockbuster” is itself a linguistic mockbuster, riding on the fame of two prior words – mockery, and blockbuster – to achieve its affect.)