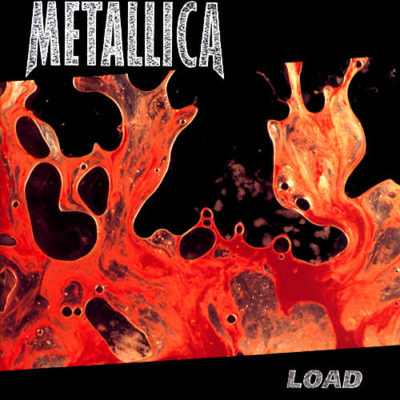 In 1996, Metallica cut off something very important, a cosmetic feature that shouldn’t affect their music yet clearly did. Even now, they’re still recovering from this disastrous shearing.

I refer to the pointy ends of their logo. The self-titled album had them. This one doesn’t. As every heavy metal fan knows, this minor change is actually a musical circumcision of the worst sort, clipping the band of its masculine power.

Anthrax did it in 1995, and the made their worst album in 10 years. Iron Maiden did it in 1998, and made their worst album ever. Ten years later Judas Priest tried the same thing on Nostradamus, a 102-minute long conceptual yawner could be likened to the end of the universe: scientists think Nostradamus must someday end, but nobody’s listened for long enough to be sure. Can you think of a band that removed pointy bits from their logo and remained good? I can’t.

Load is the result of a huge amount of touring (the band played somewhere north of 350 shows in support of the self-titled), which apparently killed their interest in heavy metal altogether. Any semblance of thrash is gone, and so is most of the downtempo Ozzy Osbourne worship on the S/T. The best thing you can say about it is that it’s not a sellout. Maybe the public mistook its bluesy, Jimi Hendrix ripoffs for alternative rock and played it on college rock stations for a while, but it’s a throwback to 1976 from side to side.

“Ain’t My Bitch” rocks hard and showcases all the album’s flaws. Ulrich’s drums have a dull, popping quality with no body or sustain. Hetfield needs a vocal coach for his numerous speech impediments (bitch-AARRRGHH). Hammett’s wah pedal addiction is now at crippling proportions. The performance and production are both flat. The tremolo-picked riff in the chorus is the heaviest thing on the record, which is just sad.

“2 X 4” hardly seems to exist. I keep having to look at the tracklisting to remind myself it’s on there. A lot of the songs are like that – they’re extremely hard to talk about because they have no memorable features. Remember when a Metallica album had like, eight near-perfect songs that were each landmarks in their own way? That was good, but wouldn’t you rather have FOURTEEN really crappy ones?

Album highlights…I don’t know. “The Outlaw Torn”, probably. “Mama Said” would be a good ballad except for the loud slide-guitar lick – this is the song that probably inspired Manowar bassist Joey DeMaio’s infamous quip “I don’t listen to country music” when asked if he enjoyed Metallica.

The lowlight is the revolting “Hero of the Day”. Maudlin, noisy, and annoying, this song isn’t the hero of the next five minutes. “Ronnie” wants to have an Aerosmith-type swagger, but all it makes you want to do is listen to the actual Aerosmith.

The cover is blood and semen pressed between two slides of glass. This is fitting: Load is a tale of things out of their correct place. Blood belongs in our veins, semen belongs in our epididymis, and 95% of this record belongs in a bin marked FOR RECYCLING. Recommended for people who want to hear bad retro-style 70s rock half-assedly played by your dad. Metal fell very hard and very far in the 90s, and sadly, one of the very deepest troughs is marked by a band with Metal in its name.