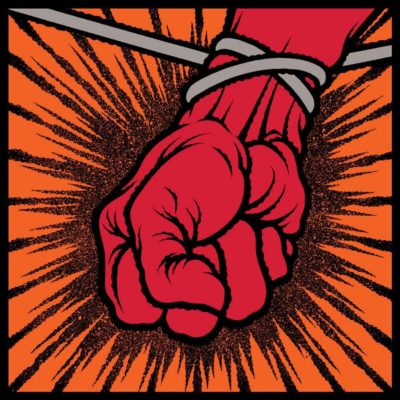 St Anger is Metallica’s 8th studio album. It was released in 2003 through Elektra Records, and is famous for being very bad. Worse than previous Metallica albums. Worse than diarrhea. Worse than papercuts. Worse than getting banned from a chat room just when you’re ready to sling a mortally wounding insult. Worse than long trips in a car that’s making a rattling sound. Worse than when the pastor says “now, let’s go a bit deeper into Paul’s contextual usage of ‘divinity’…” at 11:59am on a Sunday morning. Worse than spiders. Worse than Vegemite. Worse than spiders coated in Vegemite. Worse than Vegemite coated in spiders. Worse than hard drive failures. Worse than finishing your Greek homework and realising you forgot the accents. Worse than merging two columns in a 10,000 line database, and the line count is off by one. Worse than people calling the internet “the interbutts”. Worse than puns that aren’t puns (ie, referring to Fox News as “Faux Noose”). Worse than remakes of movies that came out last year. Worse than an old friend wants to catch up and after half an hour of small-talk he says “have you heard of an exciting new business opportunity?” Worse than a friend who tells an unfunny joke and pauses for you to laugh. Worse than filling up your petrol tank from a diesel pump. Worse than knowing that you can’t go to a Halloween party dressed as Charlie Chaplin because everyone will assume you’re Hitler. Worse than holding the bag. Worse than hodling the bag. Worse than having your mother date your high school bully. Worse than having to close your Satanic pedophile ring underneath a pizzeria because people are getting wise. Worse than Googling a computer problem and discovering you’re the first person it’s ever happened to. Worse than realising you were born to play a sport that nobody enjoys. Worse than having a special interest that brings you into contact with nonces. Worse than spontaneously exploding. Worse than biting off half a sushi roll and the seaweed is all ragged and you know there are ragged parts stuck to your teeth. Worse than calling someone “cringe” and then discovering they run a charity for blind dyslexic orphans. Worse than learning enough 3D modeling to notice fake special effects in movies but not enough to be hireable to work on a movie. Worse than being in a Metallica cover band circa 2003. Worse than the 2005 film Elektra. Worse than the fact we’re now 1/4 through Biden’s first term and 80% of all political news stories are still about Trump. Worst than women who describe themselves as “MILFs” when they’re 21 years old. Worse than typing out a 800+ word rebuttal to something that was autogenerated by an AI. Worse than realising you’ve pronounced “hygge” incorrectly for 4 years. Worse than being a Pitchfork hipster and building a time machine and then using it to kill someone other than Hitler because it’s ironic. Worse than being a hand model and your new roommate is a compulsive battle-axe juggler and shuriken collector. Worse than starting something and not finishi