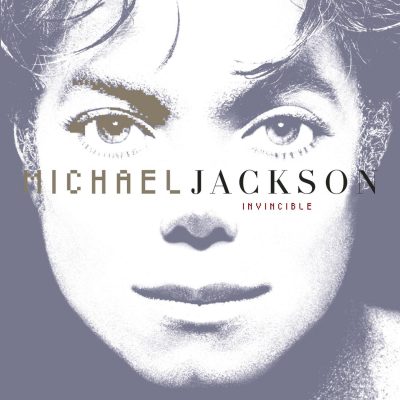 Michael Jackson’s recording career came to a sad conclusion on October 30, 2001. He should have released Invincible in September, when it would have only been the second greatest tragedy of the month.

It’s not an album, it’s a PR statement: “don’t listen to what everyone’s saying about me. I’m a normal guy!” By 2000 Jacko’s public image was absolutely out of control and he’d had two options: either rebrand himself as a Howard Hughes-type freakshow, or tamp down the weirdness somehow.

He made the boring choice, or perhaps Sony made it for him. The label had a lot invested both in Invincible’s success (its $30 million production cost remains an industry record, though Michael demanded still more money and accused CEO Tommy Mottola of racism when he wouldn’t pay), and in its main star not appearing like a total lunatic. Before anything else, this album tries to not rock the boat, and unfortunately it succeeds.

The biggest problem with Invincible – aside from the fact that there’s nothing creepier than a man loudly insisting that he’s normal – is that it’s extremely dull. Who wants to hear a former titan ripping off people who were ripping him off to begin with? The lyrics (aside from “Privacy” and the nauseating “The Lost Children”) are just all about love and romance, and the music just blurs into Boyz II Men (emphasis on the boys, I guess).

Sony was heavily invested, but the same can’t be said for Michael. He barely seems to be in the studio, and he projects not an iota of coolness or attitude into these songs (which aren’t worthy of them in any event). He moon-shuffles. He’s a Smooth Criminal whose offense is an unpaid parking ticket, a Speed Demon doing 62 in a 60 zone. I aspire to someday be this indifferent to thirty million dollars landing in my checking account.

Needless to say, he didn’t tour off Invincible, sparing us the comedy of seeing “You Rock My World” on a setlist with “Don’t Stop ‘Till You Get Enough”. He made a few media appearances. For example, in 2003 the deputies of Santa Barbara County Sheriff’s Dept got a unique meet-and-greet photo session when Mr Normal Guy was charged with seven counts of child sexual abuse.

His songwriting talent had already started to crumble on HIStory and here it’s completely gone. Sixteen bad songs. No good ones. If you want to hear music like “Billie Jean”, you’re in luck. In 1982 Michael Jackson released an album called Thriller, and by sheer coincidence it has a song that sounds exactly like “Billie Jean”! It even has the same title! Don’t listen to this album, though.

I am sorry if I seem to dislike Michael personally. I actually don’t understand him at all. The more I learn and read and expose myself to his personality, the more my noncomprehension deepens. There’s something alien and unreachable about him. But I am repulsed by the parts I see: the glimpses of squirming tentacles behind an impenetrable shell.

I am strongly persuaded that he molested children. This casts much of his character (his philanthropy, his generosity) in a different light: the deeds of a manipulator trying to escape consequences. It makes his war against the paparazzi far less sympathetic. I hear “You keep on stalking me, invading my privacy. Won’t you just let me be.“, remember Robson’s story about finding bloodstains in his underwear, and accept that some privacies should, in fact, be invaded. The paranoid tenor of his later work seems less fanciful: because in truth Michael had everything to hide.

His fans are awful. He was incredibly talented as a musician, but in the 90s this talent was eclipsed by a different skill: building and leading a kind of cult. He is a fascinating example of a secular religious icon, and to this day, living Thriller zombies haunt Twitter and Tiktok, circulating his apologetics. The basic thrust is that everything that went wrong for Michael – his finances, his appearance, his death – was someone else’s fault.

There’s a grain of truth to this. Michael Jackson never had a chance at living a normal life. But his fans ignore Michael’s agency (and four hundred million records sold buys a lot of agency), objectifying him to the level of a puppet.

Did Conrad Murray cause his death? Yes, the Jackobots say. He gave him surgical anesthetic as a sleeping aid! Bad doctor! They don’t ask the next question: who hired Conrad Murray to do this? Answer: Michael. They also don’t ask what would have happened if Murray had refused this stupid and insane order. Answer: Michael would have fired him, and found a different doctor.

The same can be said for the ruin of Michael’s face, his oversized chin implant, the nose whittled away like a blade, etc. Unneeded operations. But what would be the point of a plastic surgeon refusing to perform them? Michael had endless money to indulge his body dysmorphia. He would just go to someone else. The problem was always Michael. His story is one of tragedy, victimization, and self-destruction.

But self-destructive people can make fascinating art, and this was Michael’s saving grace. I’d like to pretend his recording career ended with HIStory. That album, like the one before, was a paranoid, sweaty jumble of blame-laying and resentment. Disturbing though it was, it made for compelling listening. You felt you were getting ringside seats for a man’s breakdown, and you got some strong songs, too: “Scream” and “Stranger in Moscow” kick the shit out of everything on this album. There’s a class of words in English better known by their opposites (gruntled, hinged, domitable, and so on). Michael Jackson’s last album is very vincible indeed.