Mickey and the Beanstalk 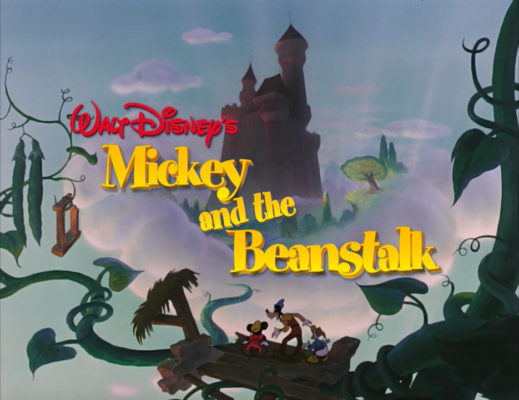 “Jack and the Beanstalk” is the American Psycho of fairy tales.

The hero breaks into a man’s house, steals his possessions, and murders him when caught in the deed. Most retellings add a clumsy exculpatory backstory (the giant killed Jack’s father, or something), but the tale has enough malevolence to be an interesting choice for one of the Disney studio’s “fairytale + mouse” adaptions.

Mickey and the Beanstalk was released with center billing in 1947’s Fun and Fancy Free, and re-cut for TV several times with different narrators, including Ludwig Von Drake, Shari Lewis, and Winnie the Pooh voice actor Sterling Holloway. The tale begins in Happy Valley, where “all the world is gay”. The gayness stems from a magical harp, which is stolen one fateful night. The crops fail and the river dries up, leaving three unfortunate peasants (Mickey Mouse, Donald Duck, and Goofy) facing starvation. There’s a hilarious gag involving Mickey Mouse slicing transparently thin sandwiches from a single slice of bread.

Mickey foolishly trades their last cow for some magic beans, which grow into a huge beanstalk, reaching up into the clouds and a giant’s castle. The giant is one hell of a dude: you’d think merely being a giant would be enough, but he also possesses magical powers allowing him to fly or transform into anything. It’s like the Tommy Lee/Pam Anderson sex tape, where we discover that, in addition to being a millionaire rockstar, Tommy Lee also has a huge penis. Some guys get all the luck.

Mickey’s plan to trick the giant into turning into a fly and swatting him fails, and Donald and Goofy are locked inside a snuff box. This leads to the film’s most nail-biting moment – Mickey stealing the key from the giant’s pocket while he sleeps. It’s unfortunately necessary to kill the giant at this point, which they achieve through a method that doesn’t make a lot of sense given what we know about his powers.

Mickey and the Beanstalk is well animated, well conceived, and has some laughs. If I had a complaint, it doesn’t find a use for Goofy. Disney’s “big three” are types: Mickey is the straight man, Donald is angry, spiteful, and insecure, and Goofy is the good-natured fool. The latter role is filled by the giant, giving Goofy nothing to do (except a cute scene where he tries to rescue his hat from a giant-sized block of jelly).

There is (perhaps) a deeper level to this film than I initially thought.

In 1913, an aqueduct was built, diverting the Owens River to Los Angeles. This enabled La-La Land to grow to its current size, but it had a dark side: Owens Lake completely dried up, devastating Owens Valley and ruining the livelihood of many farmers. The man responsible for this was William Mulholland. It might be a coincidence, but the name of the giant is “Big Willie”. I also note that Owens Lake is only a three hour drive from Burbank.