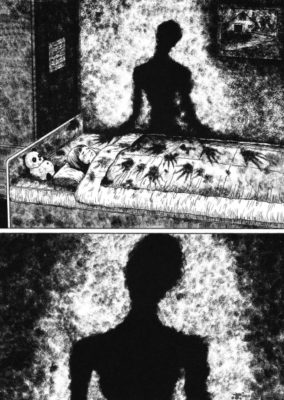 People often say that Junji Ito’s skill as an artist sometimes exceeds his skill as a storyteller. His imagery is larger than life. His characters and plots are usually very stock. If that’s the opinion you have of Junji Ito, prepare to have it left utterly intact by this 2002 volume (which I read from scanlations, as it has no official English release), which features scary art and stories that are slightly more substantial than nothing.

The results are kind of scattershot. The opening story “The Woman Next Door” is probably the best thing on here. Our heroine Mimi finds herself sharing an apartment building with a strange and threatening woman, and it evokes a powerful atmosphere even if it doesn’t really have an ending. Straight after that we get the 11 page “The Sound of Grass,” which is as unsatisfying as a 0.5 course meal.

“Graveman” is a waste of paper, featuring one of Junji’s worst premises to date (a bodybuilder flexing his muscles in a graveyard) and far too little payoff at the end. I don’t know what he was thinking here. His filler isn’t usually this bad.

“The Seashore” takes a while to get going, but has a powerful ending and some great art. “Alone with You” is the tale of a dead mother who comes back to haunt her daughter, and it also gets the job done.

The volume ends with a frustrating story called “The Scarlet Circle”. Mimi has found an underground room in an abandoned house with a strange circle on the wall. Soon, she realises it’s a gate to another world. The story is really fascinating and spooky…and it finishes in what is a strong contender for the shittiest and most obnoxious Junji Ito ending to date. This is a slight step up from “She woke up and it was all a dream.” I don’t know if he cut the story off short due to a deadline or whatever, but the alternative is that he genuinely hates his fans.

From what I understand this volume was inspired by various Japanese folk tales. Fair enough. Japanese folk influences have always informed Junji Ito’s work (his story “The Red String” being a particularly obvious example). There’s a nice little afterword done in the style of those gag comics in Uzumaki where he explains his creative process. Too bad he doesn’t tell us where the ending to “The Scarlet Circle” went.