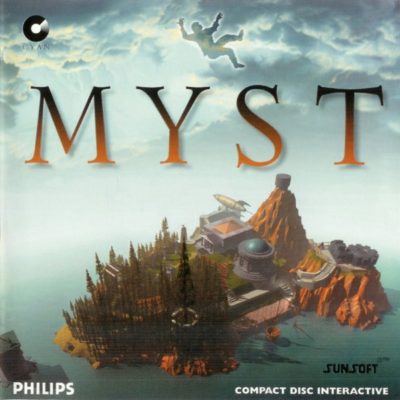 The graphics were and still are beautiful. I can think of no better use for your i386 processor and Mach 64 video card. Someone once said that Doom was the first game that could impress a non-geek with its graphics, and while that may be true, Doom was a game of small rooms and corridors. Myst’s pre-rendered environments look even better, and it came on a CD-ROM when that alone was a selling point.

But Myst cannot be played, only be experienced. It’s an interactive travel brochure. You click and look at pictures and get bored and stop. The game’s world is beautiful, but the sterility and lack of motion soon feels creepy, like you’re trapped between two frames of a movie.

For a lot of people, Myst (and The 7th Guest, which had a Myst-like ambiance) was their first experience playing an adventure game, which is like someone’s first experience with cinema being a 5 hour foreign language art film. Myst probably helped kill adventure gaming: the public’s perception of the genre swiftly became “games where you don’t have any fun.”

Too bad. The Monkey Island and Leisure Suit Larry titles contain funny writing and interesting puzzles. Infocom’s A Mind Forever Voyaging had a compelling dystopian story, and that game didn’t even have graphics. Myst just has the gestalt of moving around in a beautiful, eerie, slightly interactive world. Too bad you can’t play hype or this would be the most fun game ever made.