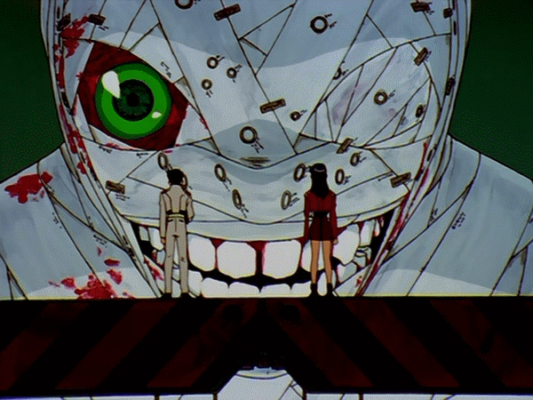 A goliath of the 90s. There are days when I think you could watch Akira, Perfect Blue, Redline, this, and then stop watching anime.

But it’s flawed! Few things this excellent contain so many problems. NGE is tonally disjointed: the early “monster of the week” episodes look cheesy next to the later psychologically-driven episodes. The plot is always unclear and often incoherent, full of mystifying exposition dumps (ep20: “We can surmise that Shinji’s body lost its ego border, and he’s floating in the entry plug in quantum form.” […] “All of the substances which composed Shinji are still preserved in the plug, and what could be called his soul exists there as well. In fact, his self-image is pseudo-substantiating his plug suit.”) that create far more heat than light.

The story – to the degree it’s comprehensible – is riven with logical issues and internal contradictions. NGE has plot holes that simply can’t be closed no matter how hard you try. Fans have been analyzing this show for twenty five years without success: utterly basic questions such as “what’s an Angel?” and “what’s [character] trying to do?” are still unanswerable mysteries that spawn 10+ page forum flamewars in their wake, with users quarreling over the definition of some Japanese word or conducting exegesis of an offhand statement made by Hideaki Anno in a fanzine interview.

It’s a credit to NGE that fans are willing to take the effort. It’s an indictment that they need to. There simply aren’t any answers to a lot of NGE’s questions: just provisional rules that change from episode to episode, and from media to media. Given that SEELE knows the truth of Kaworu’s identity, why do they tell him what’s inside Terminal Dogma in ep24? Why does he then act surprised at what he finds there? Why can’t he sense Adam’s location, the way Gaghiel can? Given that the Spear of Longinus can instantly kill an Angel, why doesn’t Gendo use it until the Arael battle? Why is SEELE so angry about losing the Spear when they can create replicas? Which souls are in which Evas? Which numbers belong to which Angels? Does Eva-01 come from Adam or Lilith? What’s with Gendo’s habit of sending out Evas one at a time to fight an Angel, instead of all at once? How is the Third Impact triggered? Anime in general creates a lot of fanfic. NGE all but conscripts you to make fanfic, because the only way the show makes sense is if you rewrite it.

Most NGE fans would concede that the show looks smarter than it is. All the allusions to Christian mythology and Freudian theory mostly just turn out to be decorative wallpaper in the end, unrelated to the show’s main concerns. Why are Ritsuko Akagi’s computers named after the Biblical Magi? Because it sounds cool: there’s no deeper meaning and there’s almost never a deeper meaning. Westerners wear shirts with Kanji letters without caring what they mean, and NGE does the same for the Western intellectual canon. This isn’t always true (there’s some surprising philosophical acuity at times), but NGE occupies an uncanny valley of fun. It’s too hard for people who just want to watch giant robots fighting, but has too many generic seinen elements for fans of highbrow anime like Serial Experiments Lain.

But NGE does a lot of things right.

At the risk of sounding ten years old, the fight scenes look great. Maybe too great – they were fires that burned through Gainax’s modest budget, forcing a restructuring of the show’s final two episodes that remains controversial to this day. Basically, Anno’s big innovation was to fuse the then-stale mecha genre with biology. The “eva” mechas (piloted by children such as Shinji Ikari as humanity’s last line of defense against dimension-crossing “angels”) are cyborgs created from the flesh of Adam, the first being. It’s strange how this tiny detail completely fixes the fundamental problem with mecha genre: you’re watching hunks of metal punch each other, which gets dull. Eva’s battles are visceral and satisfying. When a punch lands on one of Hideaki Anno’s nightmarishly-designed monstrosities, you wince: you feel the flesh being pulverised. No matter how outlandish or surrealist NGE becomes, it remains a gruesome mortician’s table of a show: focused on bodies and mortality. Being an eighty-foot giant is not a reprieve from suffering: it just means you rot all the more.

The visual design of the Angels is superb, and their variety allows NGE to have its fingers in many pies. Fights involving bipedal Angels have a glorious city-smashing kaiju/tokusatsu character, the insectile Matarael evokes the “giant bug” movies of the 1950s, the aquatic Gaghliel echoes It Came from Beneath the Sea, the space-based Angels could be read as references to Leiji Matsumoto’s spacefaring adventures, and the bodyless Angels allow for tense Outer Limits-style conflicts that are fought in a psychological or emotional domain. The bizarre Leliel stands out as a wholly unique creation – I’ve never seen anything like it before, either within anime or outside it.

The editing is also excellent, full of slam-bang intercuts, and deliberately jarring transitions. The abrupt black title cards alone are a NGE trademark. Anno has a talent for overstimulating the senses that can best be described as Artaudian: happy music plays over tragic events, we sometimes view shots from deliberately awkward angles, or lose contact with a scene just as we’re on the verge of understanding it. It’s very hard to be bored while watching NGE. The material on the screen is as infuriating and fascinating as an optical illusion or a mirage.

And although NGE often looks smart when it’s not, it’s also looks dumb when it’s not, too. Newcomers to the show (who might have been recommended NGE as a thinking man’s anime) are often struck by how it clings to the genre’s basest cliches. Partly this is because NGE rebuilt the industry in its image (Rei Ayanami and Asuka Langley Soryu were influential in establishing the kuudere and tsundere archetypes, respectively), but the more gratuitous fanservice moments were embarrassing even in 1995. The basic plot (a fourteen year old kid gets to save humanity in a giant robot while hot girls fight over him!) is wish fulfillment from a kid who gets bullied either too much or not nearly enough.

But as the show progresses, you soon see what Anno is doing: commenting on the cliches of mainstream anime. There’s playful subversion – the way the stale “harem” setup gets deep-sixed by an implied male-male relationship for Shinji, for example. The show as a whole reads almost like a knowing parody: it’s mocking itself, mocking you for buying into it. Most of the characters reach a fate that’s very out of line for their pre-set archetypical roles (the “mother figure” is quietly and cruelly destroyed, the tsundere’s psyche is snapped in half, etc), and this must have been intentional. Anno was gathering every up cliche and stereotype he could, and then throwing it all off a cliff.

He was right to. Anime is stylish and fun, but it can also be very limited. Its aesthetic choices will rise up around you like prison bars if you let it. Go on Crunchyroll and contemplate the sheer sameness of anime. How many shows are being made with exactly the same story? How many magical schoolgirls? How many harems? There are other ways of being, other stories to tell, and NGE embraces anime’s cliches just so it can destroy them publically in front of you, like the Inquisition burning heretics in an open village square.

Some have described NGE as “otaku-therapy“. I’m not sure that I’d go that far, but there’s a strong sense that Shinji is supposed to be you. NGE‘s final two episodes ram this home with startling force: how much of yourself will you give up to belong? Shinji is offered a choice to become part of a hivemind, or remain his own person. He makes his choice. Certain anime fans make theirs.

And NGE absolutely does have things to say about philosophy. It integrates Jungian theory (shadows, masks, the subconscious collective) and Schopenhauer (the Hedgehog’s Dilemma) into the plot in a way that makes sense and feels natural. It’s clearly made by someone intelligent – so how to explain the show’s sloppier plot elements? You’d almost wonder if NGE’s story even matters in the slightest, or if its plot is just more disposable-and-disposed-of cliche. By subjecting its plot to logic, we might be putting decorative furniture under a vice and hydraulic press. Yes, it shatters, but they were never the load-bearing part of the house.

In a breath, I would say that NGE entertains the casual viewer (“robots fighting each other, dude!”), disappoints the deep viewer (“the story doesn’t make sense!”), and entertains the really deep viewer (those who look past the story altogether, and view it as a kind of referendum on anime genre itself, as well as the toxic fanbase.) There’s a lot going on in NGE, and you have to look past battling robots to see it. It’s an anime almost impossible to stop thinking about. It raises issues that stick in your mind like particles of grit, refusing to leave. Grit is irritating and painful, but pearls are forged upon such.