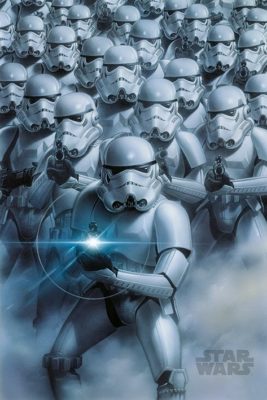 “Fan theories” have become increasingly popular in recent years (now you know what they are). Like the related phenomenon of “creepypastas”, they’re exciting at first but soon fall into repetitive cliches: bad guy is secretly good, good guy is secretly bad, dumb guy is secretly a genius, up is secretly down, main character is secretly dying of cancer and hallucinating. There’s 10-15 basic fan theories and soon you’ll have seen them all.

However, the best fan theories are compelling enough to make people forget that they’re theories, and start talking about them as if they’re accepted canon.

In Star Wars, the Imperial stormtroopers miss a lot. They do more missing than Graham Lineham addressing a transgender man. Their accuracy has become such a joke that it’s given rise to terminology such as the Stormtrooper effect.

In 2015, a theory was proposed that stormtroopers are being ordered to miss, in order to keep Luke alive and fulfill Vader’s plans. It was posted on the Fan Theories subreddit, and the author never pretends it’s anything more than fanciful speculation. The theory quickly spread across the internet, however, and soon nobody was treating it as a theory. Soon, it became a generic “checkmate, atheists” rebuttal to the most casual mention of Stormtrooper accuracy. For example, this meme on imgur (with no less than THREE lines of text explaining the joke, holy shit dude) has the top-voted comment :

haven’t we established that the stormtroopers miss on purpose?

…No. We have not. There is zero textual evidence that they miss on purpose. There’s a theory that they do, and in light of the facts, the theory’s probably wrong.

1) Why fire guns at all if they want the heroes to live?

As any marksman is taught, you never, ever point a gun at something you don’t want to kill. It doesn’t matter if you try to miss. What if a stormtrooper kills Luke with a stray shot? Blast rifle bolts have an area effect (as seen in the Docking Bay 94 scene, where blasts take out large sections of concrete), so even a “miss” might kill Luke with shrapnel.

2) They miss when there’s no reason to.

3) It’s not true that they want everyone on the Millenium Falcon to escape.

…But why miss when shooting at Chewbacca, a wookie of no tactical value?

4) there aren’t many positive examples of Stormtroopers hitting shots.

Here we see Stormtroopers storm the Tantive IV, and accomplish the feat of killing several guys in a narrow hallway with no cover. It looks like hard work.

Here’s the scene of the execution of the Jedi. Stormtroopers shoot them at point blank range. Not an amazing feat of marksmanship.

4) “These blast points… too accurate for Sand People. Only Imperial stormtroopers are so precise.”

Ben Skywalker’s quote re: a wrecked sandcrawler doesn’t necessarily imply that stormtroopers are good shots. He could mean “they knew where to aim, as opposed to Sand People who just blast away indiscriminately”. This is the risk of using dialog as evidence.

When consuming art, it’s possible to see things that aren’t there. Sometimes these mirages persist, are spread across time and culture, and the imaginary thing becomes part of the “official” tale. Nowhere in the nursery tale of Humpty Dumpty does it say that he’s an egg.

“Stormtroopers miss on purpose” was created as an imaginative “what if” theory. However, it now seems to be accepted as the gospel truth of what’s happening in Star Wars. Much of history is probably composed in a similar way.