Nobody is calling the Buffalo shooter a lone wolf 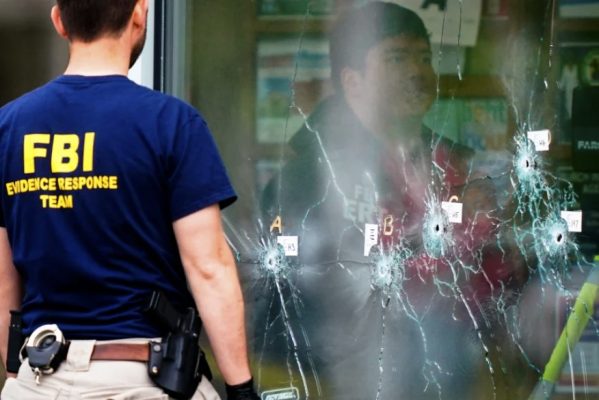 There was a mass shooting in Buffalo, NY. Ten dead.

This is a bigger deal than the ~60 murders that happen in Buffalo every year because of the shooter’s beliefs, which were naughty. He belonged to the far right. He believed in something called “The Great Replacement”. The FBI is conducting forensic analysis of his keyboard to see if he ever typed offensive hate-slogans like “learn to code” and “subscribe to Pewdiepie”, but sadly he probably did.

Social media is effervescing with the usual mixture of anger, sorrow, sloganeering, conspiracies, and bizarre object-level claims about reality. In particular, people seem fascinated with the idea that the media ignores right wing terrorism; or that it calls terrorists “lone wolves” if they’re white. 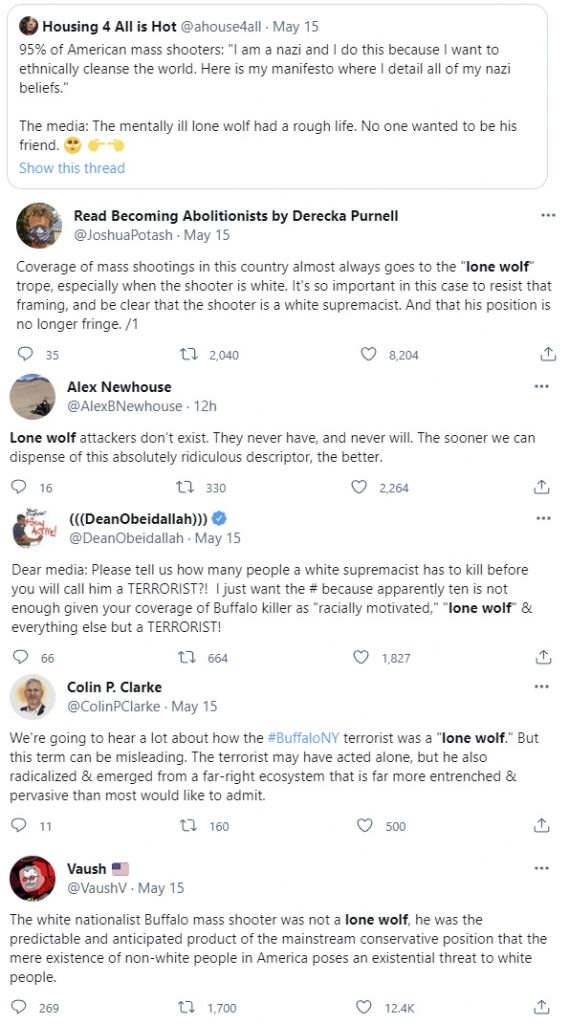 Look at the breezy confidence of these tweets. Look at the thousands of likes they’re getting. They’re not saying the media might call him a lone wolf. They’re saying it will. That it has.

Is this true? I’m going to cheat by actually looking at what the media’s saying.

CNN: “The 18-year-old man who allegedly shot and killed 10 people at a Buffalo supermarket Saturday afternoon was motivated by hate, authorities said.”

ABC: “Authorities say the shooting was motivated by racial hatred.”

Axios: “The suspect allegedly published racist writings before the attack.”

WSJ: “the writer describes himself as a fascist, white supremacist and racist”

The Grauniad: “Hate-based crime has been getting worse in recent years, largely cultivated in the cauldron of darkest reaches of the internet”

Zero out of ten describe the attacker as a “lone wolf”.

Ten out of ten connect him to right wing causes, or quote officials who have done the same.

In fact, Googling “Buffalo + ‘lone wolf'” serves no relevant results, just people handwringing about how everyone is calling the shooter a lone wolf.

This is the epitome of “making up a guy to get mad at”. Guys, nobody is doing this thing. Nobody at all. “The sooner we can dispense of this absolutely ridiculous descriptor, the better.” We can’t “dispense” of a descriptor that nobody’s using.

Twitter almost feels like a window into an alternate universe at this point. These people live in a world where every newspaper headline and news station chyron is referring to the shooter as a “lone wolf”. So why are their messages appearing in my world, where the most casual investigation shows this to be false? Is this a quantum entanglement anomaly? I wish these visitors from Dimension X would specify whether their tweets relate to their home planet or to the world that I live in, similar to how Marvel Comics distinguishes between Earth-616 and Earth-1610 timelines. It would be less confusing.

“Lone wolf” means something relatively specific: a terrorist that plans and executes an attack alone. It doesn’t mean “the shooter is unmotivated by ideology” or “the shooter has no political views”.  No semantic boundary exists between “lone wolf” and “terrorist” and “white supremacist”. You can be all of those things at once. It’s less a question of “what did you do?” or “why did you do it?” and more a question of “who did you do it for?”

Yes, the killer was influenced by 4chan’s /pol/ board. Is the board causally responsible for the terrorist attack (in the sense that if moot hadn’t renewed 4chan’s domain name in 2004, ten people in Buffalo would now be alive?) Possibly. But that’s not the same as moral responsibility. It’s also possible that Payton Gendry was a psychologically broken person, and that without /pol/ he would have fallen down some other rabbit hole (or would have encountered the same reading material elsewhere, and would have been radicalized the same way). We can’t conduct a scientific a/b test involving two Payton Gendrons,  one exposed to /pol/ and one that wasn’t. We’ll never know. Calling/pol/ a terrorist network feels very tenuous, in the same way as calling William Powell a “terrorist leader” because someone copied a bomb recipe from The Anarchist Cookbook.

A lot of people want to use the shooter’s ideological stance as a weapon against mainstream conservatism. If you’ve spoken critically about immigration, you’re promoting “Great Replacement” conspiracy theories, and a direct causal line can be drawn from you to the killer.

Twitter’s saying this, but Twitter is a bad website. Big boy journalists are getting in on the action too. Here’s Talia Lavin, in Rolling Stone:  The Buffalo Shooter Isn’t a ‘Lone Wolf.’ He’s a Mainstream Republican

But there’s no sign that the killer was a Tucker Carlson fan, or had anything but contempt for the Republican Party. He cites NZ shooter Brenton Tarrant as an influence. From his manifesto: [1]Which is being scrubbed from the internet, in the name of “not spreading the killer’s views”. This has the side effect that any idiot can claim Payton Gendry said something, and … Continue reading 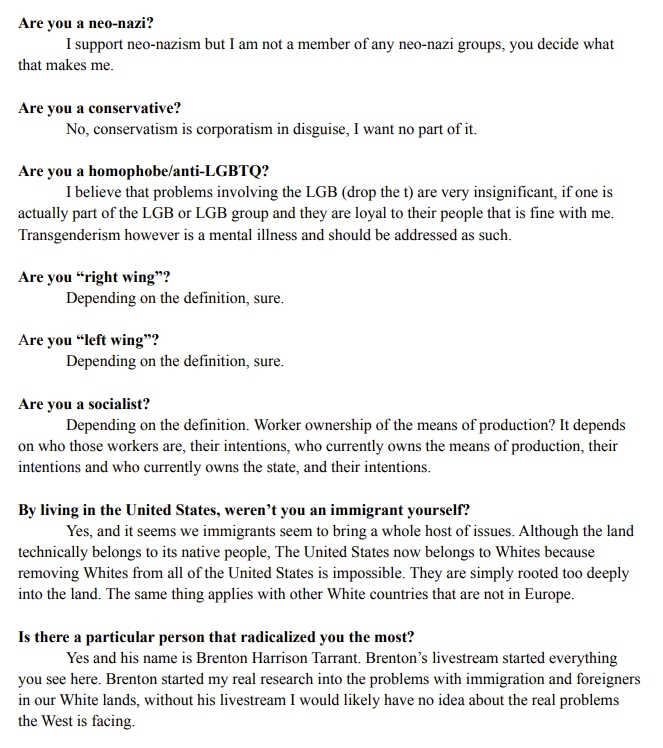 On p157, he says “conservatism is dead. Thank god. Now let us bury it and move on to something of worth.” On p31, he includes an antisemitic collage of Fox News hosts, each with a Star of David over their faces. The implication appears to be “Fox News is run by Jewish globalists”. Was he really an avid Tucker Carlson fan?

The fact that he and Carlson may have agreed on some points is neither here nor there. This man – insofar as he has a firm political outlook – is probably an eco-fascist, as Tarrant was. I doubt Tucker Carlson has ever endorsed such a viewpoint on his show or even knows what eco-fascism is.

Your political opponents are not all secretly the same. This must be the most prevalent fallacy in politics.  I used to see it on boards like Free Republic, where you’d hear about how Obama was going to rally his army of Islamic terrorists and Godless atheists and Marxist college grads and Hispanic anchor babies and devil-worshipping Satanists to overthrow America. They seemed to believe that all of these (vastly different) people were all working on the same team.

This isn’t how it works. Conservatism isn’t a monolithic hivemind any more than liberalism is, but Lavin has no interest in that kind of nuance. To her, life is a chessboard. There’s her side, then there’s the enemy side. All conservatives are working together, operating from the same playbook.

It’s an awful piece, full of emotive verbiage and factual mistakes (Alito did not coin the phrase “domestic supply of infants”, he quoted it from a 2008 CDC report about adoption). Also, it’s written like shit. Aren’t journalists supposed to be eloquent?

“The Republican Party’s embrace of nativism has been more of a full-on dash than a slow slide, and it has been catalyzed by the vast constellation of right-wing media.”

Can an “embrace” be a “full-on dash” which is “catalyzed” by a “constellation”? This sentence has five metaphors and four make no sense with any of the others.

“Far from ebbing as Trump has ceased to be the party’s sole center, however, the tide of white animus has become even more central to a new crop of Congresspeople and candidates.”

How does a “tide of white animus” become “even more central” to a “crop”? What’s a “sole center”? Is there any other kind?

But hey, I’m glad to have Ms Lavin writing this stuff, if it leaves her too busy to pursue her side hustle as an internet Nazi hunter. 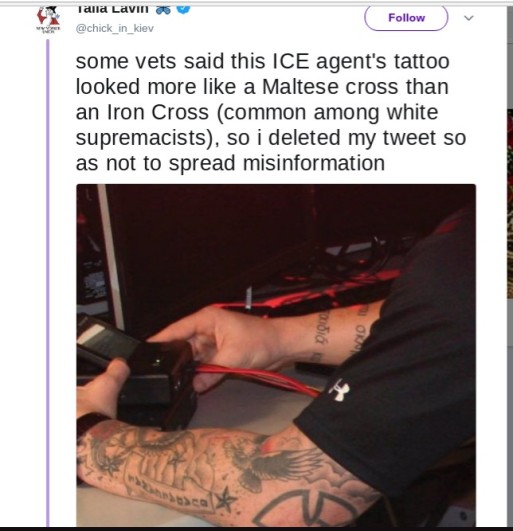 Why is it being hidden from the world like weapons-grade plutonium? It’s not scary or interesting. It’s a profoundly nerdy document, proving something that’s already been proven to Valhalla and back: mass shooters are not cool. The part where he cites the white birthrate to two decimal places has a Leeroy Jenkins energy. “I’m getting a 32.33 percentage, repeating of course, chance of survival!”