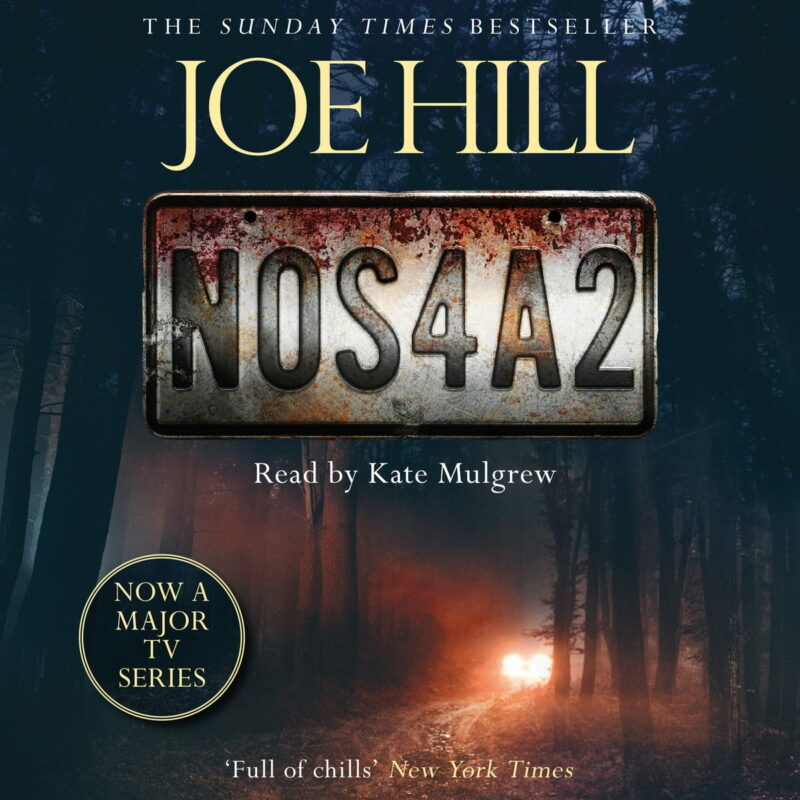 The title shows Joe Hill’s best side: his playful wit. The book is funny at times: and often because it means to be. It also shows his fatal flaw, which we’ll get to soon.

The book’s about larger-than-death pop-villain Charles Talent Manx III. He’s a vampiric creature who kidnaps children in a Rolls Royce Wraith with a NOS4A2 vanity plate. He’s Dracula, John Wayne Gacy, and Michael Jackson at once. Why couldn’t I have been murdered and left on the side of the road by this guy in 1973, instead of that Dennis Rader jerk?

Set against him is Vic McQueen, who also has paranormal gifts: She cross an imaginary bridge and find missing things at the other side. This is described as an “inscape”, a mental shortcut that some creative types exploit (damaging their health in the process). Maybe not the most original or subtle metaphor for drugs, but that’s where NOS4A2 works. The story is bold, brash, and full of color – even if it’s usually color from a spraygun and not a paintbrush.

But the pun in the title doesn’t quite work – nitrous oxide systems first appeared in automobiles in the 1950s, and Manx’s car is from 1938 – and this points to the problem with NOS4A2: it never gains the weight and heft of reality. It’s obviously a construct. The book is too clever, too full of references. It badly wants entry to the gated world of classic horror novels, to the point where it tries to pick the lock.

The plot reads like Stephen King’s ten most famous novels compacted in a hydraulic press. Vampires. Haunted car. Haunted house. Girl with supernatural gift. Ancient evil that feeds of children. Drug metaphor. Creepy undead kids. I was about to say “at least there’s no cornfield”. Then I remembered that there is a cornfield.

Sometimes the namedropping is blatant, such as when we find that Manx’s wintery retreat is in Colorado, or when Bing says “My life for you!” to Manx.

If I’m just lazily listing things, that’s how the book feels, too. While it would be unfair to call it a grinding, soulless list of in-jokes and references like Clown in a Cornfield (the world’s first “young adult” book written exclusively for forty year olds consoomers) the book is deadened by its use of horror cliches. Events in NOS4A2 don’t happen to people, in places. They happen to stock figures in generic settings, most of which are lifted from 1980s books from the author’s own father.

Is this what horror’s supposed to be? I don’t think so.

Horror is meant to be a scalpel to the amygdala. It wakes instinctive fears you might not have been aware you had. It thrives off the unexpected, off dissonance. It can’t become ever become “cosy” or a franchise without losing its soul, but we’re at the point where there’s 20 designated “spoopy ideas” that books variously shuffle around and recombine in various orders, hoping to strike gold again. It’s a real shame. Horror needs to climb out of its own ass.

Another problem is that NOS4A2 is paced very fast. The narrative’s sediment is never allowed to settle. Hill is trying to do too much here – right out of the gate we’re bombarded with various unrelated bizarre, dramatic, or supernatural things (Manx, Vic McQueen’s magic bike, Bing), along with rapid shifts in time and place that leave book’s cohesion in tatters. And there’s no displacement when paranormal events start occurring, because they occur almost from the first page!

Stephen King’s books are usually paced far slower, which gives them a certain stateliness. The nightmarish gross-out scenes are freighted down by a lot of everyday life – nothing happens for an extremely long time in Pet Semetary or The Green Mile, because he’s building up the characters and their world. NOS4A2 thinks it can race through all that in fifth gear, but it really can’t.

In the final pages, the action builds up to an exhilerating climax that goes for broke, takes out a small loan of a million dollars, then spends that, too. Hill’s a gifted natural writer, with an eye for quick, effective characterization. Early on we meet Bing Partridge, a chemical plant worker who might be developmentally disabled. Bing exclusively reads old pre-war magazines and paperbacks, and when he writes a letter, his prose is hilariously stilted and old-timey. This is a subtle but good touch. So is the way Vic goes from idolizing David Hasselhoff to hating him. Lots of writers forget the huge gap between twelve year olds and fourteen year olds, but Hill hasn’t.

But sometimes his characters ring hollow. “McQueen” is an irritating, phoney-sounding name, meant to anchor the book in car culture, and she’s such a congenital screwup that we don’t believe she’d grow up to write a best-selling puzzle book full of brain-teasers. And Vic gets a romantic interest: a big, mellow easygoing from the left side of the bell curve. Yet he’s characterized with a fannish interest in Marvel comics (to the point where he’ll argue what color the Hulk’s skin should be). Have you ever met a comic book fan? They’re not mellow and easygoing. They’re angry, vicious, and highly strung. Lou Carmody caring about comic books is about as believable as Barney Gumble running The Android’s Dungeon.

Most of the book is entertaining and well written. I just don’t enjoy (or respect) a lot of what it’s trying to do. NOS4A2 is loudness-war Stephen King, with the bad amped up far more than the good.