One Day We Will Walk Through Walls 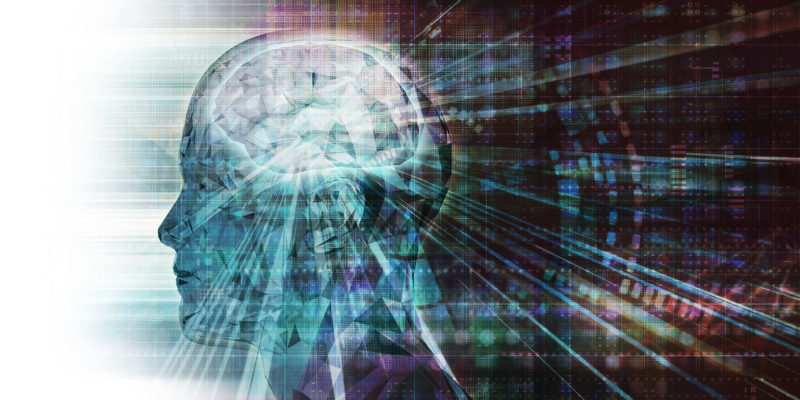 “Keep cool, Simpson. Be in the game, but not of the game.” – Bart Simpson

What does it mean to be intelligent?

Douglas Hofstaeder has an interesting idea: intelligence can escape its own nature.

A calculator has astonishing information-processing power, but it’s not intelligent. It can perform six digit division instantly, but it will never not be a calculator. It reigns as king of a tiny kingdom, a beached whale in six inches of water, unable to escape or even understand its limits. It just calculates blindly, firing shafts of voltage across an integrated circuit’s OR, AND, NOT, and XOR gates, doing what it’s always done and getting what it’s always gotten.

It’s incapable of reasoning. It can’t think “the plus key has been continuously pressed for an hour, which seems like a mistake or a jammed key, so I’ll ignore additional input to that button.” Nor can it think “my operator has entered the numbers 2, 4, and 6, so I’ll preload the numbers 8, 10, and 12 into memory just in case.”

Note that these are things would help it calculate. Bizarrely, a calculator is so thoroughly a calculator that it’s actually…an imperfect calculator. The greatest calculator wouldn’t be a calculator, it would be a meta-level device that transcends a calculator’s limits.

I think the same is true for us. I assert that the highest peaks of the human experience (whatever you mean by that) are only accessible to non-human lifeforms.

Feeling love? Human love is tainted by transactional self-interest and chemicals. Introspection? I can barely do it: my brain can only hold about seven items in short term memory at once. Enjoying art? I’ve never experienced a work of art in my life – my eyes only see a narrow 400mn band of electromagnetic energy, my ears only hear wavelengths in the 20hz-20khz range, and if I expose myself to too much light and sound, I become blind or deaf. Even the experience of “qualia”, such as a subjective perception that red is the “hot” color, is obviously influenced by facts about the world, such as the fact that fire is red. I will never get a glimpse of 99.99% of the universe. I’m living in a cell and the cell is me.

But imagine Human 2: an unlimited human. It loves boundlessly, introspects depthlessly, and its senses pour like oceans over every cognitive horizon imaginable. Human 2’s “music” might be the distant decaying rumbles of the Big Bang. It might admire the flickering of gamma rays from a single atom the way we admire the northern lights. It wouldn’t be cold or mechanical, but the opposite: alive at a transcendental level. It would view us the way we view robots, crude behavioral engines responding to gross stimuli. Why am I calling it “it”? I’m the it.

You might not consider Human 2 to be a human at all, might argue that these limitations are part of what make us human. I don’t accept this, and we don’t seem to apply this logic anywhere else: nobody thinks cripples are more human than able-bodied people, or that blind people are more human than sighted people, or that Albert Einstein was less human than those around him. In fact, creativity (which is a fancy way of ignoring mental ruts) is thought of as a particularly human trait. But even if Human 2 is nonhuman, such a being would at the very least be very, very powerful.

It’s quite a talent to be wrapped in chains, think “no”, and watch them all melt away. 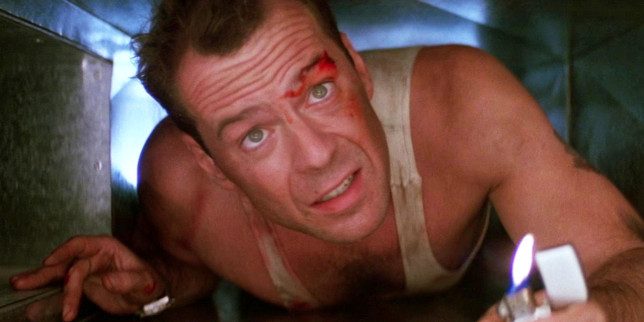 One of the more thought-provoking things I’ve read is Nakatomi Space.

In short? The action movie Die Hard contains hidden depths (in more senses than one), and Bruce Willis’s character John McClane might be among the more intelligent characters in fiction. I won’t repeat the plot, which isn’t a story so much as a situation: McClane is trapped in a building, unarmed and alone, and a team of gunmen are attempting to kill him. This is a bad reality for McClane, and he survives by ignoring that reality and substituting a better one.

He navigates Nakatomi Plaza by bizarre means. He climbs through ducts, descends elevator shafts, breaks through walls, and scales the outside of the building. Watch the film, and you’ll hardly see a single instance of him moving through the building in the way the architect intended.

Hans Gruber’s men are watching hallways and stairwells, and they’re completely caught off-guard by McClane’s unorthodox traversals of Nakatomi Plaza. He is an archetypical “everyman” and has no powers, yet in a sense they are Human 1 and he is Human 2. He’s able to outwit them because he’s not limited by their mental conceptions of what’s possible. Gruber’s thugs are like calculators. In a fair fight, they would crush McClane, just as we’d be crushed if we tried to outcalculate a Ti-86. But they never get a fair fight, because they’re slaves to the reality around them, while McClane has picked the lock.

Most office walls are literally just air: thin sheets of drywall, fluffy insulation, and a couple of wooden studs. A man with an X-Acto knife can cut through them in seconds. Why shouldn’t you do that, if you need to? Because an architect didn’t plan for you to move through his building that way? What did that architect ever do for you? Likewise, air ducts and elevator shafts can allow for movement of things other than air and elevators. This isn’t intended design though, and most people can’t think forward to the next step: unintended design. McClane can, though. So can some soldiers in the real world.

In the above article you’ll find a link to an essay called “Lethal Theory”, by Israeli architect Eyal Weizman. He discusses Israeli combat practices during the Battle of Nablus, where they used a McClanelike approach to urban warfare. They would conduct combat operations in straight lines on a map, ignoring barriers in the way. If they encountered a wall, they tore it down or blasted a hole in it. If there was a house in the way, tough shit. This completely bypassed the difficulties of urban combat (choke points, sniper nests, free-fire zones), simply by redefining obstacles out of existence. They tunneled through the city, coring it as a worm eats an apple. Cities, like individual walls, are just collections of atoms in the end. All that matters is how easily you can move those atoms. There’s really no reason to retain a mental conception like “wall” when you have tanks and high explosives.

They were inspired by the work of Deleuze and Guattari (see this piece on smooth and striated space), in a rare case of post-structuralist philosophy being useful for something.

“There is no other way of moving! If until now you were used to moving along roads and sidewalks, forget it! From now on we all walk through walls!”

In the words of IDF paratrooper brigade commander Aviv Kokhavi:

I’m reminded of a story told by Otto Carius, a WW2 German tank ace. He was dueling in a Jagdtiger against an enemy tank, which took shelter from his superior firepower behind a building. But Otto knew that his 128-millimeter Pak 44 main gun had awesome penetration. He guessed at the tank’s position, pulled the trigger, and turned the enemy tank into slag behind two walls. The mental shorthand of “Walls keep me safe”, ironically, can kill you.

If you have the power to ignore creative limits, you have a rare gift. I can’t really do it, personally. It’s easy enough to design something. It’s harder to undesign something, to unsee an old pattern and replace it with a new one.

Part of being a hacker is attaining this kind of second sight. Whether we’re talking about code or systems design, , seeing weaknesses that are invisible. After all, visible weaknesses are by definition out in the open, and would have been attacked (and reinforced against) already. The road nobody travels is often the easiest. Likewise, part of security involves awareness that apparently solid walls can suddenly melt away, if an attacker is clever enough. 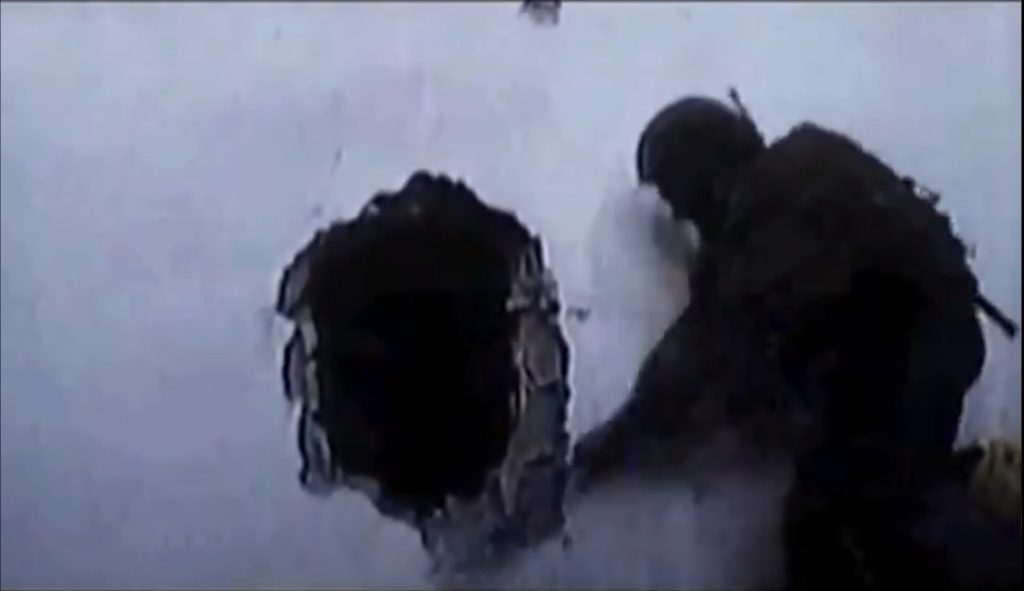 In the 21th century, we understand something about limits, chiefly because humanity is pressed face-first against them.

Science is slowing down. Human intellectual achievement is reaching the crest of a sigmoid function – we’re working harder to gain less and less knowledge. Right now, 90% of the scientists who have ever existed are alive, and we are making alarmingly little progress on the deep questions of reality. Does dark matter exist? How to unite quantum physics and the general theory of relativity? How does the Higgs boson interact with particles of different mass? Where does life come from? Many Worlds vs Copenhagen vs something else? Whither consciousness? How does etc?

We have painstakingly drawn up a sketchy and incomplete map, with coastlines that don’t connect, and contradictory reports from different explorers. From time to time, scientific upheaval causes great swathes of our map to flash up in flame, erasing knowledge we thought we had.

…and looming above all, a meta-question: what are the questions we’re not even seeing? What intellectual issues are invisible to us because of our nature as humans, just as a calculator can’t draw inferences from a button being pressed for eight hours continuously?

The idea that we’re blocked is profound. After all, if you’re blocked, you might someday be free. For centuries, thinkers have thrown themselves at the walls of their humanity, using drugs, religious experiences, and deprivation to try and crack those walls and let in light. Most of them fail, and the walls actually harden from stone to steel as the years pass. And the few people who succeed (Artaud, Bowie, Turing) often end up dead or mentally scarred.

It’s not surprising that our attempts to break free have failed. Evolution has spent years rolling dice with our brains. Any obvious change our neural architecture that boosts our intelligence or our creativity should have been uncovered by chance by now.

All that remains is an engineered solution. It’s possible that one exists, right around the corner. The fact that we can’t even see the faintest glimpse of one isn’t cause for despair. A person can guess a computer password for eternity – that doesn’t mean the password’s unsolvable, or even difficult. Someone else might know that the password setter was a Wu Tang fan, enter “cashruleseverythingaroundme” and get inside on their first try. That’s the hope for humanity. That the all-surpassing limits locking in the human mind are actually easily subvertible, if you know how. Limits are funny, like one-way glass. From the inside you see impassable barriers. People on the other side forget they even exist. One day, we will build those who walk through walls, and they might be us.