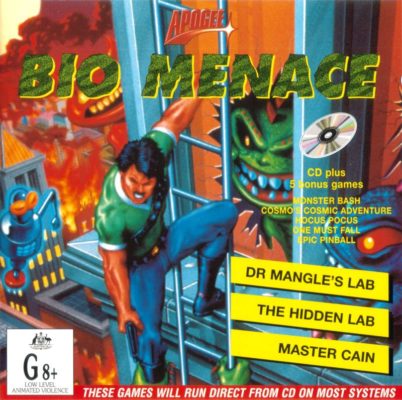 A 1993 platform game programmed for DOS by Apogee’s Jim Norwood, who went on to develop Shadow Warriors, Heroes of Might and Magic V, and that cherished classic Third Example Goes Here.

You play as a porn-mustachio’d spec forces operative called (I fear) Snake Logan, who has crash-landed in a mutant-infested city and has to etc. Platform games usually belong to either the “jump around and collect stars” Mario school or the “shoot guns and blow shit up” Contra school. Bio Menace is unapologetically the latter: it’s among the most violent Apogee games, with monsters dying in explosions of blood and body parts. This clashes somewhat with the visual design of the monsters themselves, who look like Teletubbies.

Bio Menace feels older than it is. Slated for a 1991 release, it was delayed for two years due to engine modifications, and by 1993 it looked as dated as glam metal. The graphics are 16-color EGA, and the backgrounds don’t parallax-scroll. At least it ran smoothly. I recall being able to play it on Windows XP, although I don’t think it works on any 64-bit operating system.

The game itself was a competent blend of “find the key to disable the laser forcefield” type puzzles, and hallways filled with angry monsters. It had a nice sense of place – the first level in particular is a realistic urban environment littered with bodies and wrecked cars. Completing levels means rescuing civilians. Reaching high places means finding a ladder or riding an elevator. Health powerups and keys are usually found in places that make logical sense, like lockers and cabinets.

In this sense, at least, Bio Menace anticipated the future. The arcades were going away. Gaming was ready to pupate into the next stage of its life: immersive experiences not unlike Hollywood movies. There’s even an effort made at storytelling. When you rescue a civilian, amazing dialog pops up on screen (“I’m gonna dust that little dweeb! He can’t do this and escape!”)…hey, at least it’s only the second worst-written videogame about a spec forces operative called Snake.

Bio Menace is a minor game, without the arthouse pretensions of Eric Chahi’s Out of this World or the rotoscoped professionalism of Jordan Mechner’s Prince of Persia. It probably made some money, and even if it didn’t, it surely wasn’t a big red stain on Apogee’s balance sheets. Bio Menace is like throwing ten cents down on a roulette spin. Is it worth playing now? No, unless you’re a fan of “ARE YOU A BAD ENOUGH DUDE TO RESCUE THE PRESIDENT?”-style cringe.

Koyaanisqatsi: Life Out of Balance 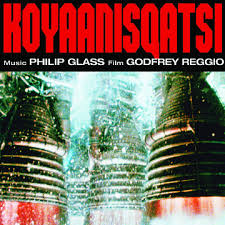 “If we dig precious things from the land, we will invite disaster.”

If you undercrank stock footage of a city it looks frantic, and if you put peaceful music over a natural landscape it looks calm. That’s Koyaanisqatsi: an emotionally moving but intellectually casuistic tale of a supposed clash between modern man and nature.

Director Godfrey Reggio seeks to show the world we live in, but he relies heavily, too heavily, on audiovisual effect, and the film ends up feeling artificial and manipulated, a staged ballet pretending to be honest documentation.

I’m reminded of Luis Buñuel’s 1933 “documentary” of Spain’s remote Las Hurdes mountains, Land Without Bread. The film’s theme – Las Hurdes is a harsh land, where life is cheap – is sold by a powerful shot of a goat climbing a steep cliff and slipping and tumbling to its death. When you learn that the scene was staged (the goat was shot with a rifle) you feel a little cheated.

Godfrey Reggio’s film isn’t deceptive in the same way, but why contrast bustling cities with the Grand Canyon? Is this a logical or obvious comparison? Why not compare a city with a raging ocean? The Antarctic Circumpolar Current carries a million times as many tonnes of water through the Drake Passage as Times Square does cars. There is peacefulness in civilization, and instability in nature.

“Koyaanisqatsi” is a Hopi word, defined (according to Wikipedia) as “life of moral corruption and turmoil” or “life out of balance”.  The film ends with Hopi prophecies portending our doom. The film’s reverence toward primitive man is of a piece with most environmentalist scare programming on TV: white people are bad, capitalism is bad, technology and industry are bad. Instead, we should take a moment to learn from beautiful primitive people, who have so much to teach us. It’s funny that most of the people promulgating this regressive message are politically left wing. Nostalgia for the 1950s makes you a conservative dinosaur, but nostalgia for 10000 BC makes you an enlightened child of the earth-spirit.

I don’t argue that modern society is perfect, but our greedy hyper-capitalist “life out of balance” has brought us good things, too: medicine, global communications, global transport, and the ability to make a film such as Koyaanisqatsi. We have created problems (such as climate change), but we can also create solutions. By contrast, the primitive people deified in the film are largely helpless against desertification, disease, ecological collapse, and so on. Any glamor the pre-technological life possesses probably lasts until your first toothache.

While I dislike Koyaanisqatsi‘s theme, I like almost everything else about it. It’s an extremely clever folding of sound over image (and vice versa), demonstrating how one can enhance and illuminate the other.

The visuals are powerful. Clouds slide in reflection across glass skyscrapers, time-lapsed so that they ripple and pulsate like gaseous alien creatures. Streams of traffic flow along streets, accelerated into rivers of pure light. Koyaanisqatsi was a microbudget production and contains a lot of stock footage, but the way this footage is cut together is clever and interesting.

Popular culture was influenced by Reggio’s style. The “sped-up urban footage” motif endemic to 90s music videos started here, for example. Near the end of the movie there’s an extended sequence where the camera tracks a person in the street…until they look up, notice they’re being filmed, and we cut to another person. To be honest, I’m not sure what the point is, but it’s a striking trick, and I’ve seen it imitated since.

Philip Glass’s music is the equivalent of a pointillistic painting, thousands of self-referential cycles of dying notes that seem to melt inside the ear like icicles. The soundtrack is complex  yet paradoxically simple. Brian Eno’s pioneering ambient music in the 1970s attempted to reward any level of listener attention (whether you’re focusing intently or listening with half an ear, the music should be enjoyable), and Glass’s work achieves this with even more beauty and concision.

The later films had bigger budgets but smaller impacts: they were like bombs landing on a target already blown to rubble. The trouble with making sequels to an experimental film is that, by definition, you’re no longer experimenting: you’re adding to a tradition. And even though Naqoyqatsi (in particular) tried to differentiate itself by amping up the digital editing to ridiculous and obnoxious levels, the Koyaanisqatsi approach had soaked into popular culture, and no longer seemed new or interesting. Hard to be impressed by time-lapse footage when you see the same stuff in Nike ads and Madonna music videos.

Koyaanisqatsi is an awkward beast. Its strongest element is its craft…the craft that subtly works against it at every turn, because it adds distance between the viewer and the reality on the screen. This is one of those films that might be better if it was less competently made, because then we might the truth, instead of a farrago of editing tricks. 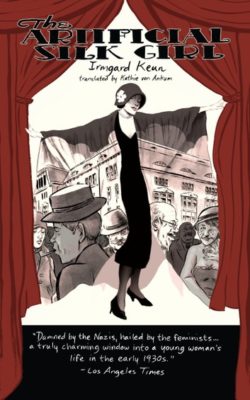 In this 1933 novel, a young woman called Doris gets laid. Too bad that’s only half the sentence, and the second half is “off from work”.

Wearing a stolen fur coat, she journeys to Berlin, intending to make it big as a Glanz – a film star.

“I want to become a star. I want to be at the top. With a white car and bubble bath that smells of perfume, and everything just like in Paris. And people have a great deal of respect for me because I’m glamorous.”

Her plans fail, and she ends up increasingly far from the high life, working as a maid, a pickpocket, and eventually a “girlfriend experience” (to use a modern euphemism). She’s following her dreams, but they’re leading her backwards: like a riptide where swimming harder means drowning faster. All she has is the fur coat, reminding her of the possibility of dreams. But the coat doesn’t belong to her. It’s someone else’s.

Keun writes a character who is stupid and smart at the same time: given to psychological monologues worthy of a tenured psychiatrist while completely unaware of how and when she’s being manipulated by others – men, institutions, and society. Being an actor is hard. You need to be focused, hard-working, very, very lucky, and at the end of the day you either have “it” or you don’t. Before coronavirus hit, Hollywood and West LA were stacked tens of thousands deep with aspiring actors, bussing tables and mowing lawns and firing out headshots like despairing messages in bottles. They won’t all succeed. Supply outstrips demand a hundredfold. “Why does New York have lots of garbage and Los Angeles have lots of actors? Because New York got to pick first.”

The Artificial Silk Girl is a kind of Grecian tragedy – a narrative that moves on towards an inevitable unhappy conclusion, while having a bitchy, funny air that makes it readable ninety years later. It’s seldom depressing or sad: Doris has a bulldog’s tenacity, and never gets kicked down for long. This, ironically, makes her into her own worst enemy: a more realistic girl would have gone home long ago.

She herself is apolitical, but the author wasn’t.  When the NSDAP came to power, books The Artificial Silk Girl became unacceptable, and were burned on massive bonfires. Irmgard Keun (living dangerously, one thinks) actually attempted to sue the Gestapo for loss of income.

But Das Kunstseidene Mädchen is most successful not as a political or feminist polemic, but a cautionary tale of the dangers of following a dream. Sometimes ideas are just bad, and it’s almost better for them to fail immediately than to continue on: just as it’s better for a jet plane engine to break down on the runway than at an altitude of 5,000 feet.

Doris’s momentary successes seem almost cruel, because they perpetuate a fantasy. Just when she’s at the end of everything, a ray of light appears…just enough so that she keeps chasing her dream, and remains impoverished, starving, and wearing stolen clothes.