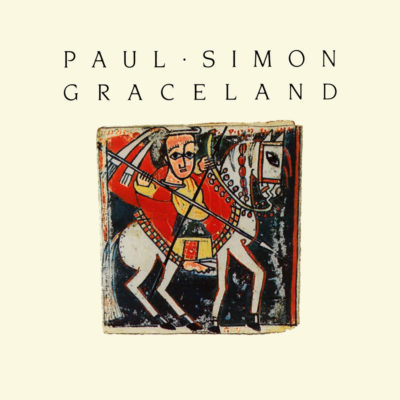 On paper, Graceland sounds terrible. Folk rock musician in his mid-forties, divorced, losing relevance, dabbling in “exotic” styles that he has no fluency in or understanding of. There’s no barf bag big enough.

But music isn’t written on metaphorical paper, it’s written in air, and Graceland is somehow Simon’s greatest album by a mile.

It’s a stupendous record. Everything wrong with every past Simon solo record is made right: the excess of ballads is pared back, Simon’s occasionally flat-sounding voice is swelled by backing vocalists, and the thin-sounding arrangements are replaced by drums and basslines as massive and powerful as the thrumming steel cables of a suspension bridge. The songwriting is ten times better: normally Simon’s solo discography suspends me on a knife’s edge between mild entertainment and mild boredom while I wait for a classic like “Still Crazy” and “Me & Julio…” to show up. But here, nearly all the songs are that good.

The usual story of Graceland involves Paul Simon, his career failing after a series of indulgent vanity projects, being being given a bootlegged cassette tape by a singer-songwriter he was producing. He’d never heard anything like it. It had an accordion and lots of layered vocals and wouldn’t leave his head: it simply sounded alive in an age when pop music was breaching new frontiers of sterility.

He wanted to hear more; he wanted to make more; but what was it? This is a frustration of pre-internet life most people have forgotten: unlabelled tapes or records full of music you had no way of identifying. After some investigation, he discovered that the bootleg contained South African music by a group called the Boyoyo Boys. And although the particular tape Simon possessed seems lost to time, it probably sounded a little like this.

This is mbaqanga, a South African pastoral style that flourished as much as it could under apartheid. Musicians everywhere have a tendency to die broke and exploited: and for mbaqanga musicians this was nearly a certainty, yet enough of their music made it to Western shores (in defiance of a UN cultural boycott) for Simon to hear it. It picked the lock in his head, allowing him to write songs again.

One of the things about music is how it serves as fertilizer for the flowering of other music. Art never just exists within itself, it also creates the future, and Simon decided his future involved flying to South Africa and working with mbaqanga musicians. The result isn’t timeless in the same way as the greatest Simon & Garfunkel work. The gated snare and chorus-spackled guitars mark it as a creature of the mid 80s. But it’s a monumental achievement, towering over all the solo work Simon did before and after.

“The Boy in the Bubble” contains a catchy accordion riff by Forere Motloheloa, along with a loosely-sung lyric by Simon that almost sounds ad-libbed at the mic (listen to his unstressed delivery on “the bomb in the baby carriage…”)  “You Can Call Me Al” sees fretless bassist Bakithi Kumalo stealing the show with an intricate bassline that nearly breaks my left wrist every time I play it (it also contains a slap bass solo that can’t be performed by human hands at all, because Simon reversed the tape in the studio!). “Crazy Love, Vol II” might be my favorite song, particularly the lush, painterly guitar parts in the verses and Simon’s oblique but heartfelt lyrics.

All these songs – even the minor ones – have rhythmic grooves that are dense and compelling. And Simon often seems like a small player within his own songs, which was almost certainly his intent.

By 1986, Simon had grown sick of “three chords and the truth” music in the Bob Dylan vibe, with Mr Wise Musician strumming guitar and mumbling profundities from atop the bandstand. He identified generically “African” music as a counter to that – he wanted its communal feel, its devotional attitude, its erasure of distinctions between bandleader and musician and musician and audience member.

It’s music that raises up the humble, putting everyone on the same level. Yes, African music has room for virtuoso musicians and virtuoso performances (and Graceland has plenty of both), but the sense of interconnectedness always comes first.

This was important for Simon, who is a pop singer who has always had trouble getting out of his own way. Nearly all of his music is both quotidian and personal, focused laser-like on Paul Simon’s stories, experiences, and daily life. Even his most political song, “American Tune”, has its thematic sting (Nixon is president, we all failed) drawn by navel-gazing lyrics that equate to “I’m Paul Simon and I feel bummed out”. For some people, it takes courage to take the stage. Simon might actually be the reverse: it takes him courage to back away, and let others steer his ship.

His usual songwriting approach was to write something, then book session musicians to play it. But Graceland forced him to do something different: capture performances first and then try to turn them into songs. He still knew jack shit about mbaqanga, and constructing Graceland was a long and often painful process, full of second guessing and scrapped takes. But the result is something unlike anything he ever tried before (aside from the reggae-influenced “Mother and Child Reunion”, which was a dry run for Graceland in some respects).

Paul Simon’s past music is him constructing a house – and often finding it to be a lonely, windy mansion, forbidding and alienating to everyone (including himself). Graceland is more like Paul Simon moving in and unpacking his bags in a house already built – a house that’s packed to the rafters with noisy and happy people, raising their voices in song. Thankfully, he’s a small man.

Despite ceding musical authority to dozens of South African musicians, the lyrics still have Simon as a commanding force. He wrote pages and pages of them – long-time engineer Roy Halee recalls that one of Graceland‘s biggest challenge was recording extremely wordy songs with extremely busy instrumentation without having everything collapse into a mess of shards. It speaks to the incredible creative period that Graceland was that Simon had so much to say. But again, it’s more about his own life than anything more cosmic.

The title track “Graceland” is a thrill ride along a lonely landscape with guitar lines shimmering like ripples of heat over a highway. But aside from a few gestures to history (the Civil War, etc), it’s a song about his breakup with Carrie Fisher. Two tracks later, he’s collaborating with the Boyoyo Boys themselves. “Gumboots” is a minor track, and Simon apparently didn’t enjoy working with them, but he left the song on the record, since they were the ones who’d inspired the project. What’s “Gumboots” about? The Boyoyo Boys probably intended a reference to South African “gumboot dancing” – mine owners forbade their workers from speaking when on the job, so miners improvised a system of foot movements to warn each other of cave-ins and so forth. In later years, the gumboots became one more strand of mbaqanga music, and a vivid example of how something as dull as an item of footwear can have profound cultural connections. That historical aspect isn’t present on Graceland‘s “Gumboots”. Simon just delivers a ruminative lyric about him trying to find love in small ways and places. I guess it’s fair for a Paul Simon solo album to be about Paul Simon. But just be prepared for an album that’s a little less globalist and world-spanning than its billing suggests.

Graceland was massively popular. And controversial. Simon had broken a UN embargo by making it. Black musicians accused him of stealing their style. Whites playing black music has always a touchy issue. He was selling out, he was trying too hard, he was appropriating styles, he was supporting apartheid. Disputes over songwriting credits haunt Graceland like restless ghosts. When Simon toured the album he found himself picketed by hundreds of people. Members of a militant South African liberation organization threw grenades into office of his promoter.

But the antonym of love isn’t hate, it’s indifference. People have always cared in an obsessive way about Graceland, even those who don’t like. The old radio cliche about “a platter that matters” comes to mind. Graceland might not be universally loved, but for better or for worse, it matters.