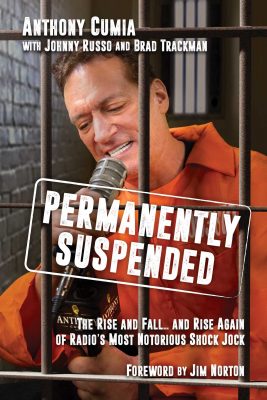 They used to make these little boxes where you’d jiggle a dial and someone’s voice would come out. The voices belonged to radio jocks, who were in constant competition for listeners. Some had smooth voices, some played the right music, others had the “local perspective”. Then, in the late 80s, they started saying naughty words.

“Shock jock” radio hit its peak in the 1990s. The usual format (used by scores of stations) was two guys with a line in outrage, dodging fines and performing increasingly outrageous stunts. It was a simple, effective storyline with ready-made heroes and villains: the plucky, scrappy radio DJs (yay!) versus the big bad “management” entity that was always trying to ruin the fun (boo!). The FTC enforced strict content guidelines for public airwaves, and it was a game to see how far jocks could take edgy content. You almost had to keep tuning in: it might be the last day your favorite show was on the air.

Opie & Anthony were a shock jock duo of exceptional quality. They achieved success (in between repeated firings and cancellations) as a kind of everyman Howard Stern show, doing a mix of stunts and pranks and gross-out bits. They weren’t afraid to lampoon the radio business itself – their “Jocktober” bits were quite revealing as to how fake and constructed almost every part of a commercial talk radio show is. In their later years they transitioned to being a proto-podcast, focusing almost entirely on interviews and nonscripted content.

This new focus on personalities made something clear: one of the hosts was way more talented than the other.

Gregg “Opie” Hughes had gone to broadcasting school and knew how to push buttons and go to segues. But Anthony Cumia was a dementedly funny, with thousands of fascinating stories, a skill at impressions, and an ability to “rap” with almost anybody. He was self-destructive (a race-rant got him sacked from his own show), but was ridiculously skilled at what he did. The crosses in his backyard weren’t the only thing on fire.

Or as Jim Norton says:

“Regardless of the discussion, the context, the topic, Ant has the ability to reach in with perfect timing and pull out something funny. He is by far the most talented radio performer I’ve ever known, and he’s as fast as any comedian who has ever lived. I’m a great get if you nee someone to describe an old lady falling down the steps or a blumpkin joke, but Anthony can be captivatingly funny describing air-conditioning duct installation. He can walk you through every aspect of the most monotonous activities, paint a perfectly clear picture, hilariously veer left and right, and will not once stray into the territory of boring.”

Permanently Suspended: The Rise and Fall… and Rise Again of Radio’s Most Notorious Shock Jock is Anthony’s biography. Disappointingly, it has coauthors. Indeed, large sections read like one of Anthony’s broadcasts transcribed. It basically covers his life from childhood to 2017 or so, when he was hosting a show with Artie Lange (which he no longer does). I’m not sure who it’s for. Non-O&A fans won’t care. O&A fans will have heard all of these stories told before on the radio, many times. But it’s funny and fast-moving, and there are lots of photos.

This Dave Douglas guy was always just a bug up our asses. He once said, “You know what you should do? Take a picture of who you envision as an audience member. Who do you picture? Find a magazine with a picture of someone who resembles this person you have in mind and put that picture in front of you on your mixing board. So when you’re talking into the mic, you get an image of who you’re talking to.” The fucking guy actually said this! Well, we nodded and smiled, and I couldn’t look at Opie and he couldn’t look at me at this point. We were just laughing our fucking asses off. […] Then we found a Swank magazine and cut out pictures of a woman squatting and posted the pictures. “Here’s how we picture our audience: a bunch of filthy cunts.”

The book captures Anthony’s head at a particular moment, when he’s immersed in his current gig, and that weights the book in a way I didn’t care for. Reading about a millionaire building a studio in his Long Island mansion is boring. And there’s obviously a lot of juicy drama that he leaves out – stuff like his fling with transsexual Sue Lightning that you’d only know about from the now-banned subreddit.

Anthony has zero business skills (as he admits himself), and his career has been spent waiting for lucky breaks. But in the long run, nobody in radio was that lucky. In 2000, satellite radio emerged as a commercial force. Because it didn’t use the FTC’s airwaves, it could be completely uncensored. Everyone thought that satellite would be God’s gift to the shock jocks: instead, within a few years the format had been killed forever.

Why? It turns out that shoving a wiffle bat up a female intern’s fundamentals was never that funny (particularly when you couldn’t see it). It was interesting because of the shock: you weren’t allowed to do stuff like that on the air! Once you were, the shock disappeared, and the whole enterprise stood revealed as boring and hack.

The book is bittersweet because it records an era that will never come again. The mid 90s exist in a cultural gray zone of sorts: too late to be lionized like the 60s, too early to be effectively archived by the internet. Shock jockery is the kind of thing that was once everywhere, but now mainly exists in memory. Anthony Cumia is a graying part of a once-great legacy.