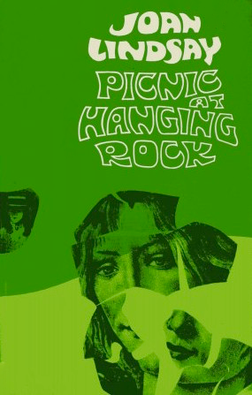 Picnic at Hanging Rock is an classic in Australian psychological horror. It’s a genuinely disturbing book, and thinking about it makes me feel queasy and cold. It’s also Australia’s Blair Witch: a literary stunt that left its own provenance unclear. Many thought that the book told a true story, and even now you’ll meet folk who talk about the “Hanging Rock mystery” as if it really happened.

Hanging Rock was written in 1967 but is set over half a century earlier at a girls’ boarding school in Victoria. A group of four people (three students and teacher), leave a picnic to explore the nearby Hanging Rock formation. Three are never seen again. The fourth is discovered days later, nearly dead from sunstroke. When she recovers, she has no memory of what happened to the others.

The rest of the book is the community coming to terms with the mystery. A bloodhound fails to find the missing women, as does a local “black tracker”. An army of well-meaning volunteer searchers blankets Hanging Rock in footprints and trail-marks, trampling whatever evidence might have existed. The final people to see the party report some odd things: the three students were in a trancelike state, with staid mathematics teacher Greta McShaw literally undressed to her underwear. The reader actually follows the girls until the final moment, and knows some additional facts that the other characters don’t. But ultimately, we don’t know the full truth either.

Whatever happened at Hanging Rock (and there are signs that some characters know more than they are telling), the lack of resolution is like a thorn embedded in the community’s collective flesh, driving them frustration and to madness and then to further tragedy.

The events of the story bear an odd resemblance to Finland’s Lake Bodom murders, where three backpackers were slaughtered, with the sole survivor possessing no memory of the night’s events. Bodom happened in 1960, but I doubt Joan Lindsay was aware of it. Finland is far from Australia, and was further still in 1967. The world was much bigger then.

And unlike the United States (where a Bodom-style incident would have inspired sixteen made-for-TV movies, a Netflix series by Jordan Peele, and teenage girls obsessed with finding and marrying the killer), Finland isn’t culturally fascinated by tales of violent crimes, nor does it possess the regency to spread them all over the world.

Like Lake Bodom, Hanging Rock exists in the real world. I learned some interesting things about it on Wikipedia. It’s more properly called Mount Diogenes, after the Greek philosopher who held that civilisation is corrupt and nature is moral. Geologically, Hanging Rock is a mamelon, after the French word for nipple (is it important, in light of this, that all the main characters are female?)

Joan Lindsay does a good job of making Hanging Rock sound old-fashioned. Like any turn-of-the-century novelist, she almost puts on a pair of white gloves and chaperones you through the pages. This is the sort of book where you read sentences like “All this was nearly six years before this chronicle begins”. Only a few anachronistic words betray the book’s modernity – such as “deadbeat”, American slang that entered common usage in the 1940s.

When you climb Hanging Rock, you ascend a to a sharp point and then descend down gently rolling hills. The book’s structure is a little like that: the climax arrives in the first three chapters, and the rest of the book is a gradual come-down. Some readers find this anticlimactic, but to me it adds to the book’s sense of unease. As you read on, you realise you are wandering further from knowing what happened. You aren’t solving the mystery, you’re anti-solving it! It’s as if the answer to the puzzle is a solid island, and the book is an ocean dragging you ever further away. It’s agonizing, and compelling.

So, do we ever learn what happened? Do we even get a look through a crack in the door? Make up your own mind, but maybe there’s a reason they call it mystery fiction as opposed to solution fiction.