Procrustian Bed of His Own Design 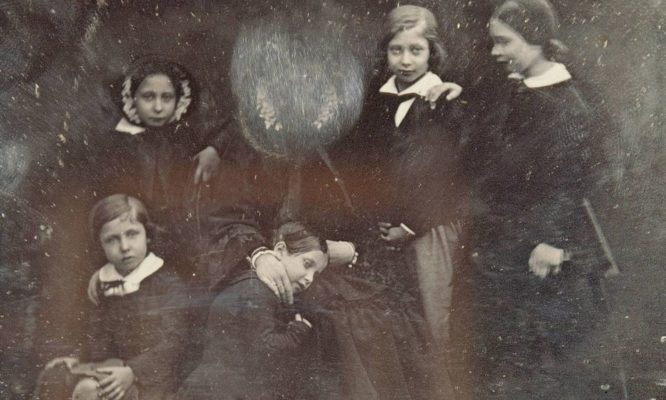 On March 1954 the annual edition of The Great Soviet Encyclopedia was published by Moscow’s Sovetskaya Entsiklopediya. Under B was a glowing article on BERIA, LAVRENTIY, the great hero.

Beria was denounced as a spy, tried, and executed later that year. The Encyclopedia’s subscribers received a letter asking them to cut out and return the page on Beria. They were sent a replacement article (this one on the BERING STRAIT) which they were to insert into the volume so there’d be no missing page, no jump of numbers, no indication that a change had been made. Beria had been annihilated: cut from history, and the cuts also cut.

In the Soviet Union it was easy to cease to exist at any time and for almost any reason. It didn’t matter who you were: a decorated war hero, an inner party member, a useless artist, Stalin’s own daughter. Nobody was safe, nobody was above suspicion. The Soviet Union did scary things to be people, far more unsettling than mangled bodies in a ditch. Execution takes away a future: the USSR tried to take away everything.

By 1952, Soviet historical revisionism was becoming common knowledge. In Foreign Affairs Vol. 31, No. 1, journalist and ex-communist Bertram David “Bert” Wolfe laid out the case[1]Wolfe, Bertram D. “Operation Rewrite: The Agony of Soviet Historians.” Foreign Affairs, vol. 31, no. 1, Council on Foreign Relations, 1952, pp. 39–57, https://doi.org/10.2307/20030940. for this in embarrassing detail: they weren’t particularly subtle or worried about being caught. Important historical figures weren’t present in the USSR’s textbooks, facts were retooled and adjusted to fit narratives, and in some cases, entire races of people seemingly vanished.

Stalin warps history into a Procrustean bed of his own design […] Deletions from, and insertions into, the original texts of Lenin’s Collected Works as well as his own. The object in this method is to establish his infallibility during and after the October Revolution. […] expunging of the name of Trotsky from all available records. […] Omar Khayyam ceases to be a Persian poet of Nishipur and becomes “a natural product of the Tadzhik people” (a Soviet Republic). Shamil is no longer to be remembered as a hero of the Caucasus who led his people in resisting Tsarist oppression; he is now a “reactionary serving the interests of Britain and Turkey” more than a century ago. […] Companions of Lenin who opposed Stalin became unpersons — their names erased from the scrolls. Nationalities suspected of disloyalty in war, such as the Volga Germans and the Crimean Tartars, became unpeople, — their identities evaporated, and their peoples scattered through the steppes. Material things which offended him, such as museums devoted to native arts instead of to Great Russian benefices, became unobjects, — their contents marked for the trash can. […] When Stalin changes his line or attitude (toward anything under the sun, past or present) the historians must push the new concept backward to include all that went before. The present enemy must be viewed as having been the enemy always. Books, articles, statements, and so on to the contrary, must be purified or burnt. […] To quote the 1934 Stalin in Russia 1952 would be to take one’s life into one’s hands.

Wolfe describes this red-pen attack on reality as “Operation Palimpsest”, which is an odd way of putting it. Palimpsests are old pieces of parchment where the writing has been scraped away so that another layer of text can be overwritten (literally) in its place. In the 21st century, with the aid of chemicals and spectral analysis, we can usually recover the original text. Palimpsests, in other words, are failed acts of removal. The writing is hidden…and yet it remains.

As the Beria story illustrates, you can’t just hide something, you also have to hide the act of hiding. It’s no good for a magician to make a rabbit vanish if the audience can see the pulley and wires and trap-door. Political history is replete with examples (Watergate, Lewinski) of bungled coverups that probably did more harm than the original crime, and poorly-done censorship can draw attention to the very thing it tries to cover up.

Below is an infamous pair of photos, synonymous with Orwellian creepiness. They half-depict Nikolai Yezhov (Stalin’s NKVD head from 1936-1938) before and after a history adjustment. 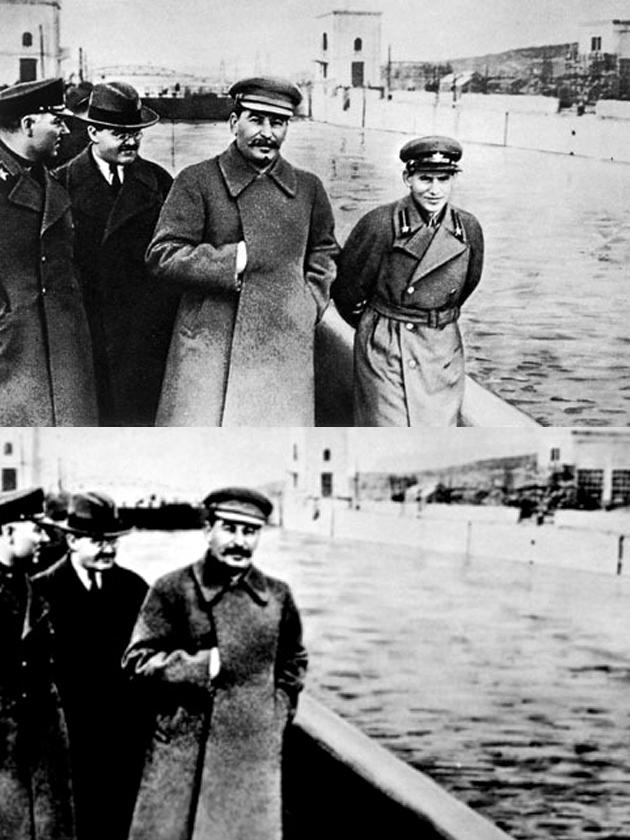 Is it a good fake? I don’t think so.[2]Although I have the benefit of hindsight. The editing is reasonable, but the shot’s framing gives it away. No photographer would compose a  shot this way: with all the people packed onto the left and the right showing just empty water. Clearly there’s supposed to be someone on Stalin’s right.

This picture would pass casual inspection, but if you knew that government photographs were prone to censorship, this one would raise red flags (in many senses). Nikolai Yezhov is gone, yet he’s more present than he was before. It’s a method of censorship that reverse-censors, like hiding something beneath a spotlight.

Even if the editor had cropped the photo tighter, it’s possible in theory that Yezhov’s presence could be re-established by a sufficiently advanced machine learning algorithm. We’ve been teaching computers to read emotions from contextual clues since 2003[3]M. Pantic and L. J. M. Rothkrantz, “Toward an affect-sensitive multimodal human-computer interaction,” in Proceedings of the IEEE, vol. 91, no. 9, pp. 1370-1390, Sept. 2003, doi: … Continue reading. Perhaps the reverse can happen – an AI reconstructing context from an emotional state. Perhaps there’s something subtle about Stalin’s expression or posture that indicates there’s a man on his right. I’m not sure if it’s possible, but we’re absolutely getting closer to a world where it’s possible.

Technology is the specter at the feast. What will it allow us to do? How soon? Palimpsests appear clean to the naked eye, but to a technological eye the writing’s still there. This artificial gaze (unlike the human one) grows sharper as the years pass: picking out more and more signal from the noise. Historical crimes once considered unsolvable might soon be cracked by increasingly sophisticated uses of forensics and genomics, and so will historical omissions.

Unfortunately, the same fruits of technology will be repurposed to become tools of tyrants and monsters. An advanced deep learning algorithm might be able to recover Yezhov, but a far simpler one would be able to scramble or distort the image to make this impossible, in the same way that a simple freeware program like DBAN can, within seconds, wipe out data in such a way that the entire NSA, given infinite money and years, couldn’t get it back. Entropy’s a bitch. The USSR tried to delete their citizens, but failed because they didn’t have a delete key. The will was there, the technology wasn’t. Seventy years later, a real technological delete key is either coming soon or already here. When it’s finally used, we’ll be the last to know.

Stalin used more crude methods to reframe reality. Ironically, his attempts were rather democratic: he tried to unperson his enemies by public consensus.

Consider the absurdity of the Beria omission. The NKVD wasn’t raiding homes and confiscating copies of the Encyclopedia. They (via Sovetskaya Entsiklopediya) were issuing instructions for citizens to voluntarily censor their own books. They were explaining what needed to be done with full confidence that their instructions would be followed. People were at perfect liberty to leave the page on Beria in the book, but they didn’t think that would happen. After all, Beria didn’t exist in the new history. Why would you possibly want an entry for a nonexistent person in your encyclopedia? A lot of decisions make more sense when you let go of assumptions that the truth is important.

That’s maybe the cruelest, most humanity-defying thing about the USSR in this period: the way they made the people party to their own destruction. It’s not that difficult to crowdsource oppression: East Germany’s Stasi, over the course of its existence, had over 600,000 informants [4]Helmut Müller-Enbergs: Die inoffiziellen Mitarbeiter.(Table 9, page 36) In: BStU: Anatomie der Staatssicherheit – Geschichte, Struktur, Methoden, Berlin 2008, a substantial proportion of the population. It’s a frightening thought that if we ever disappear, it won’t just be the work of Big Brother but also Big Sister and Big Daddy and Big Mommy and Big Neighborhood TV Repairman. Everyone will collaborate on your unpersoning without shame, perhaps without awareness. They’ll do it out of rightness. A new reality has been imposed where you don’t exist, and thus you don’t. It takes a village to raise a child (as the aphorism goes), and it takes a village to bury a child, too.