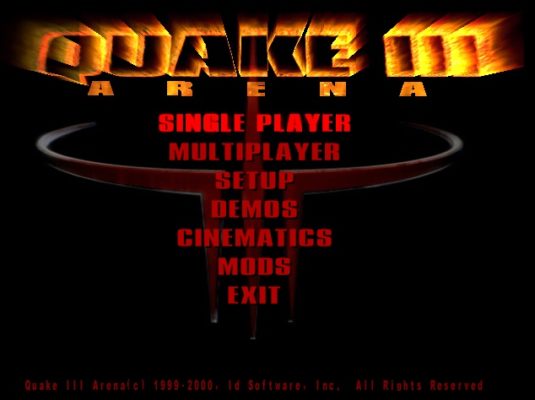 I don’t know if the third Quake is a better game than I and II, but it’s certainly less of a game. They cut away any story mode, focusing it like a laser on its deathmatch experience. You run in circles, trying to kill enemies more times than they kill you. The sarcastic way people described Doom and Quake is now a literal reality.

The result is a first person shooter of incredible purity. Playing Quake III Arena is like breathing pure oxygen – liberating, and destructive to your health. As soon as a stage loads, your mind enters a trance state, and your body falls away. Only three things remain: a left hand on the WASD keys, a right hand clicking the mouse, and an eye orchestrating the violence. The circuit sparks and crackles, the connections fusing together, and when the match ends, it takes a few seconds for the hands-eye unity to remember it has a body.

The game was meant to be played with other people. It has a single player mode, but it’s not a good one and you sense the game is laughing at you for picking it. You play against “bots”, which aren’t smart but are difficult in an abusive fashion. Turning up the difficulty means they gain split-second reflexes and superhuman accuracy – they simply never miss with the railgun, which isn’t fun.

As with past Quake games, there’s a game-inside-the-game, and mastery of competitive online play requires exploiting oddities in the code like rocketjumping (surfing the blast of an exploding rocket), plasma climbing (scaling walls with blowback from the plasma cannon), circle-jumping (pirouetting to add massive velocity to your next jump), and more. The developers would probably spit out their Adderall-laced coffee if they saw what modern players do with Quake III.

A game like this isn’t about content, but about balance. While Doom’s juice came from “yay, cool weapon” and “yay, cool map”, Quake III’s design requires an analytical approach: “are the weapons equally strong, or does one dominate? Are the maps laid out in a way that leads to fair gameplay, or can you just camp a spawn spot and fight off all comers?” Single player is about indulging orgiastic power fantasies, while multiplayer is about fair play and rules. It’s hard to get both right with the same game engine, and maybe it was for the best to ditch a story mode.

The graphics were great, almost to the point of undercutting the game’s minimalist ethos. This game reduced your Riva TNT to sludge. But the lighting, shadows, and all looked very good for the time, with the only competitor being Unreal Tournament.

Thomas Aquinas once said “I fear the man of a single book.” The idea is that you can be unstoppable by doing one thing very well, and Quake III Arena does indeed do one thing very well. “It’s just mindless violence!” – some developers tried to dignify their games away from that, but id Software was apparently taking notes for their next design document.