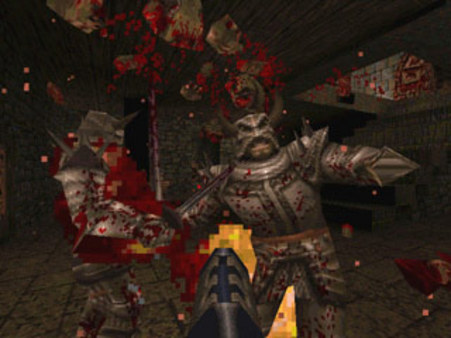 In 1996, an amazing first person shooter came out. Regrettably, this is not a review of Duke Nukem 3D.

Quake isn’t a game: that’s the big misconception people seem to have about it. It was an advanced 3D demo showing off some John Carmack’s latest tricks so he could sell his engine to licensees. It’s furthermore a product for modders and hackers and people who knew what “IPX tunneling” and “strafe jumping” meant.

If you picked it up expecting to install it and have a good time, then the joke’s on you.

Gotta hand it to Carmack, this is one hell of an engine demo. For the first time, we were three fucking D. What does that mean? Better perception of height and depth. Camera angles that lean and sway realistically. Light and shadow maps. More elaborate architecture (remember, in Doom you couldn’t even have a room on top of another room). Network architecture also got a shot in the arm, as Quake ditches Doom’s clumsy ad hoc netplay for a contemporary server/client model, meaning you got to enjoy nice low latency while a thirteen year old calls you a faggot.

But there’s no game, and that can’t be emphasised enough. The storyline could be written on a postcard (using a paintgun as a pen). The weapons are mostly copies of Doom’s. There is exactly one good monster in the game. The bosses are of the “push a button and watch it fall over dead” variety. There was more environmental interaction in Commander Keen.

Quake gets called a horror game, for some reason. Other than a Lovecraftian tilt to some of the artwork, most of the game’s ambience stems from its stark technical limitations.

Quake out of the box uses a range of 256 colors (well, 226, to be exact), meaning lightmaps utterly hog the palette (every single tone needs like 16 lighter/darker versions of itself). The verdict? You’re running around gray castles…but they’re very realistically lit gray castles! In movies, they say that it takes a lot money to make something look shitty. Quake was a game people bought 200Mhz Pentiums to play, but visually it looks like something you’d scrape off your shoes.

The single player mode is six hours of running around brown/grey castles, collecting keys. Multiplayer consists of trying to play the maps that came with the game, realising they suck, and downloading better ones from the internet.

Ditto for everything about Quake. It just feels unfinished. The weapons, the monsters…everything’s a placeholder reading [INSERT MORE COMPELLING CONTENT HERE]. This game begs you to mod it, and reskin it, and make it into something worth playing. You are the variable in Quake’s quality, not the developers. The power is in your hands!

Quake is the stone soup of PC gaming – a non-product that only becomes valuable when you put additional effort into it. It was impressive as an engine demo, but those degrade at exactly the speed of Moore’s Law. The best FPS games lengthen their replay value with great content, but that wasn’t the priority here. By the time you realised Quake was a lemon, you’d already bought it.

I still play Duke Nukem 3D and Blood. And though I don’t exactly hate Quake, I cannot fathom a universe where I play it again. It’s a museum piece now, and you know what happens to those. They put them behind glass, and you’re not supposed to look but not touch.