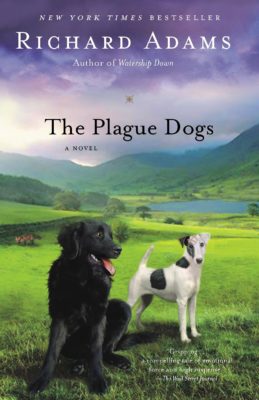 According to public opinion Richard Adams wrote just two books. Guess the first one, don’t win a prize. The Plague Dogs is his other one. It has parts that are audacious, tense, exciting, and well-written, but it has no parts as good as Watership Down. Read it for a greater appreciation of Adams’ debut, because it shows some of the ways Watership Down could have gone wrong.

Rowf and Snitter are laboratory dogs subjected to horrible medical research. After a careless janitor allows them to escape, they take refuge in the hills of England’s Lake District, preying on sheep to survive. Rowf is a weary, cynical mutt who’s given up. Snitter is a fox-terrier driven insane by experimental brain surgery. Combine their parts and you would have a single healthy pedigree animal. Their chances of survival aren’t good, but Snitter (who is a visionary similar to Fiver) has an idea that he might have once had an owner. Is it true, or another ghost from the crack in his head?

Meanwhile, scientists at the laboratory try to contain the story of the escaped dogs (and instead throw gasoline on the blaze at every turn). Soon Rowf and Snitter are mistakenly believed to be carrying a superplague, and half of Cumbria is out hunting them with rifles.

The Plague Dogs is indecisive, never sure of what it’s doing. At once it’s a grim satire, anti-vivisectionist propaganda, a “naturist” ramble through rural England, and a thrilling animal adventure. The parts sometimes work on their own but don’t become a harmonious whole.

The satirical scenes are as subtle as a gunshot to the face. The laboratory is called Animal Research, Science and Experiments (ARSE), the dialog between government bureaucrats sounds like Yes, Minister, muckraking journalist Digby Driver makes Rita Skeeter seem like Truman Capote, there’s a fat Fleet Street magazine editor whose name is Hogpenny because he’s fat, etc. It echoes Evelyn Waugh’s Scoop at times.

The ARSE scientists are comically evil, torturing animals on behalf of makeup and cigarette companies.[1]I was reminded of the Onion: New Ted Nugent Cologne Tested On ‘Every Goddamn Animal We Could Find’. The place is clearly intended as Pawschwitz: some day animal rights activists might abandon the Holocaust as a comparison, but not this day. Rowf and Snitter receive identifying numbers at the lab, which was alread troweling on the subtext, but Adams also can’t resist telling us that ARSE’s Dr Goodner used to be Dr Geutner and came to England via Buchenwald, at which point it stops being “subtext”, transcends being “text”, and becomes “clubbing the reader across the head”.

Digby Driver is implausibly lucky; always at the right place at the right time, always getting the right person to say the right thing. He should ditch journalism and buy lottery tickets. He’s also stupid: after unmasking Goodner’s identity, he blackmails him for information on the lab escape, as if a Nazi war criminal on the government payroll wouldn’t be a far greater scandal than two dogs running across the countryside.

It’s probably that most of The Plague Dogs’ readers wanted another animal adventure, but The Plague Dogs has little of Watership Down’s optimism. Adams’ rabbits were as capable as Navy SEALs and that book’s happy ending felt deserved, because Hazel and Bigwig and Fiver had earned it through their courage and cleverness. Rowf and Snitter are just helpless mutts by comparison, relying on luck and a helpful fox to survive. The Plague Dogs contains a lot of “the dogs are in trouble again, deus ex machina coming in 3…2…”

This might be The Plague Dogs’ big problem; the protagonists are animals in a story that only has room for humans. Rowf and Snitter can’t even understand (let alone influence) their circumstances, and this thrusts them into a passive role. To advance the plot Adams has to draw back the camera onto the human cast, almost to the point where Snitter feels abandoned by his author as well as his master. The Plague Dogs ends up being a cynical, dark, and sometimes funny book about human politics…between scenes of dogs huddling under a bush feeling scared.

Watership Down had the right idea by only giving us the rabbits’ point of view. Humans existed as supernatural forces akin to Greek titans: terrible monsters that left devastation in their wake. We didn’t need scenes of Berkshire politicians taking bribes and authorizing a construction project in Sandleford. That would have thrown the spotlight in too many different directions and onto too many characters, instead of the ones that mattered. The Plague Dogs commits this error, and becomes an extremely murky book.

And it lacks the largeness of its predecessor, its mythical heft. There’s no equivalent to the lapine language, no counterpart to the El-ahrairah stories. The only fantasies are the ones coming from Snitter’s damaged prefrontal cortex – and these aren’t thrilling, they’re sad, because we know what caused them. Animal experimentation is dreadful, and Adams’ show-offy allusions to classical literature seem out of place. The Plague Dogs is no epic in the mold of Virgil and Homer: it’s a bleak book about a bleak world where heroes don’t exist.

In 1982 Martin Rosen “adapted” The Plague Dog to film in his inimicable way. I remember a TV screen full of endless gray. It might be the most miserable film ever made about dogs (or tetrapods in general). At least Old Yeller spent most of his film not getting shot behind a barn.