Robert Crumb – The Book of Genesis 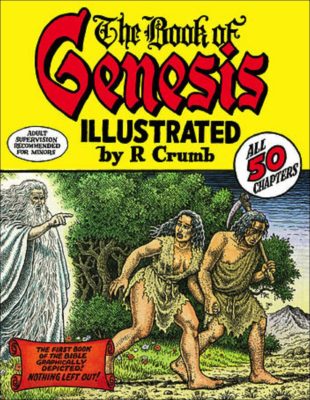 The Book of Genesis is a 224-page graphic novel by noted cartoonist Robert Crumb, based on the book of the same name by noted deity God. It’s literally the full text of Genesis, painstakingly hand-lettered in (and around) cramped panels of Crumbian imagery. It’s all here: the famous stories, the less famous stories, and even the “Jokshan begat Dedan, who begat Ashirum, who begat…” genealogies. Not a verse has been cut, no matter how boring or inappropriate for the comic medium.

While reading The Book of Genesis, a nagging issue kept bothering me. The point. Where is it? What is it? What is any sort of reader supposed to get uot of this? Crumb spent four years working on a product with no entertainment value at all. Maybe he feels pride in being the first person to adapt Genesis unabridged as a comic book, just as the first astronaut to land on Pluto will feel pride, despite it being a dull lump of rock.

So why doesn’t it work? Biblical-themed comics tend to either be didactic, cloying efforts by believers (Jack Chick’s tracts being the most famous example) or angry polemics by atheists (see Jesus and Mo and a thousand other webcomics). I assumed Crumb – who has perfected body duplication technology so that he can be a fly in every jar of ointment – would be in the second group, and that the Book of Genesis would be full of gleeful blasphemy.

Instead, it’s exactly what I’ve described: a comic version of Genesis. Not a single other adjective applies – perhaps not even “good” or “bad”. This is a huge problem: the stories of Genesis are so familiar and famous that artists have stripped them to their bones. If you’re attempting to tell (and sell) the tale of Noah’s Ark or Jacob and Esau once again, you damned well need a second adjective!

Despite doing the art, Crumb leaves no trace of himself in the book. Does he like the stories he’s writing down, letter by letter for fifty straight months? Does he hate them? What emotions do they inspire? Is he realizing any spiritual truths? Is he growing even more sure of his decision (at age sixteen) to become an atheist? I have no clue. I’m not Crumb’s biggest fan but I understand why he’s liked: he has a style, and it’s a compelling one (nobody else could have written Fritz the Cat, for example). But he approaches this project with all the verve of a manga letterer making a thousand yen a page. There’s no creative elan to be seen here.

His imagery is trite, cribbed from Michelangelo, Ignatius of Loyola, and Cecil B DeMille. God has white hair and a beard. He creates the earth like a wizard casting a spell in a Saturday morning cartoon. The Garden of Eden looks like Bambi. The Ark is a large floating shoebox. There are some unintentionally funny parts. During the genealogies, he needs to come up with a visual element, so he just draws headshots of what these dozens of people might have looked like. It looks like the fighter select screen in an SNK fighting game.

Crumb’s form constantly works to undercut him. The Bible’s stories are big and epic, and they would have benefited from double-page spreads, not tiny panels. Again, there’s unintentional laughter. During the flood, we see drowned people and animals, floating face-up in the boiling sea. It would have been a striking piece of art, except it’s too small. They look like toys bobbing in a child’s bathtub.

If I could guess at Crumb’s purpose, it was to provide a comic that contains no exegesis or interpretation whatsoever. The mere act of editing a work, by definition, changes it, so by leaving everything in, he was free from the charge of distorting the Bible. However, Genesis is quite a long book, and cramming it into a comic makes it virtually unreadable. So much text crowds the page that it induces claustrophobia. Combined with Crumb’s signature art style (itchy, hairy, and uncomfortable) and you have one of the most unpleasant experiences I’ve had so far in a graphic novel.

Occasionally, he takes a few small liberties. Potiphar’s wife is depicted as a harridan, not remotely beautiful. The city of Sodom is obviously (and anachronistically) Babylonian, with Ishtar Gate inspired architecture. The passages at the end where Crumb discusses some of the stories are quite interesting, but again he keeps his feelings close to his chest. And that’s something nobody wants to see from Crumb.

The Book of Genesis is a little like a sculpture of the Brooklyn Bridge made of toothpicks, more interesting for its existence than its function. “For verily I say unto you, till heaven and earth pass away, one jot or one tittle shall in no wise pass away from the law, till all things be accomplished” (Mt. 5:17-18). Well, it’s been accomplished. And now I will move ahead to never thinking about it again.