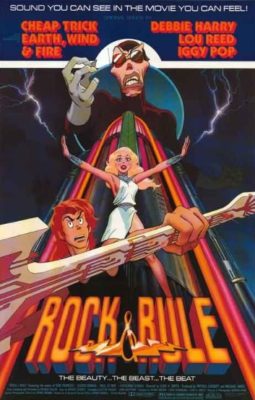 The plot is incidental (and embarrassing); cartoon mice save the world through the power of rock. It’s based on a 1978 Nelvana TV special called The Devil and Daniel Mouse, but updated to be edgy and dark and very, very serious. The songs are pretty thin, and guitars are wielded more often as weapons than as instruments.

But there are good moments, too. Some nice animation, and occasionally great character design. I say “occasionally” because it partakes in animation’s most onerous trend: Humans with Dog Noses. Who started the HWDN craze? Carl Banks? The Beagle Boys were obviously cartoony, but here we have straight-up humans with dog noses. It looks ridiculous, and immediately deep-sixes the edgy, dark, serious premise.

Dog noses are the first of many questionable artistic choices. The supporting characters are drawn like funny animals, but the lead characters are drawn realistically. They don’t seem to exist in the same world, and when whenever a lead and a support stands together the sharp disjunct between the two styles is all you can focus on.

My favorite part of the movie is everyone’s favorite part: the villain Mok. He steals the show with one of the most innovative character designs I’ve ever seen in an animated movie: a pastiche of Mick Jagger, Lou Reed, and Thin White Duke-era David Bowie. His face is an unimaginably complex manifold of vertices and angles, blending the feminine and masculine (and canine, but I’ve made my point), and the animators deserve kudos for keeping his ridiculousness on model. The movie suffers greatly whenever Mok’s not on screen, although there are fun computer-generated visuals and Debbie Harry does the best job she can.

The story in brief and in full: Mok (“the only Ohmtown rocker to go gold, platinum, and plutonium in one day!”) is seeing his commercial success wane, and hatches a plan to summon a demon from hell so he can…I dunno. I seriously have no idea what he’s trying to do, but we never understood what David Bowie was trying to do in real life, so there you go.

He kidnaps the female singer from a shitty glam rock band, because only her voice can complete the satanic ritual. Her dislikeable male co-singer has to rescue her along with some bumbling comic relief characters, who are more like comic constipation. Mostly, the movie succeeds in making you groan and cringe, such as when we find out they’re playing at Carnage Hall in Nuke York.

Bootlegs credit the film to Ralph Bakshi, which is false, yet also true, because this sort of movie probably wouldn’t exist without him. The success of Wizards and Fritz the Cat ushered in a few brief years when studios gave a bit of rope to animated films that weren’t obviously for children.

The rope had apparently played out by 1983, and Rock & Rule feels tampered with. The Gibsonian cyberpunk atmosphere is leavened with moments of wacky slapstick that could have been spliced in from Goof Troop (they couldn’t, for chronological reasons, but the vibe is similar). In particular, Mok’s henchmen ride around on rollerskates, which might have been an effort to save money on animation. When your characters are on wheels, it doesn’t matter if they slide around on the frame.

If a studio meddled with Rock & Rule, this is understandable. The film is confused and hard to market, and I’m still not sure who it was for. But it didn’t make any money even with all the commercial compromises, so why did they even try? Go for broke on your crazy post apocalyptic rock musical furry whatever! I’m reminded of this exchange from Karate Kid:

“I’d get killed if I go down there!”
“Get killed anyway.”

* (“Adult” means two fully-clothed characters feeling each other up, implied drug use, a Satanic pentagram, some intense imagery, and one character calling another “dick nose”, which if true would still be an improvement over dog noses.)