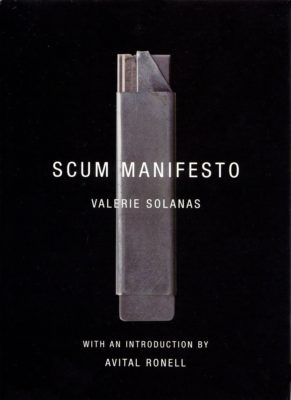 At the risk of sounding like a dril tweet, you gotta hand it to Valerie Solanas. She saw a problem and did everything in her power to fix it. Of all the feminist theorists scribbling about society’s war on women, Solanas was one of the few who truly meant it. She’s in a class with Elliot Rodger, Fred Phelps, and Pol Pot: true believers who make you feel as small as an insect because they bled for their beliefs as you’d never do for yours. Reading SCUM Manifesto is like “reading” the shattering wall of light from a plutonium bomb explosion at ground zero: it’s hard not be blinded by the intensity of Solanas’s faith.

The disease: men. The cure: no men. In SCUM Manifesto (which is not titled The SCUM Manifesto, the Scum Manifesto, or any of the internet’s misspellings) Valerie Solanas outlines the failings of male-governed society and proposes radical action: Eve needs to take her stolen rib and plunge it back into Adam’s chest, sharp end first.

You may have heard that SCUM stands for “Society for Cutting Up Men”, but Solanas doesn’t want to cut up men, precisely. She feels that men can be rationally convinced of their uselessness, at which point they’ll “go off to the nearest friendly suicide center where they will be quietly, quickly, and painlessly gassed to death.”

Is the book meant as satire? It could be read that way. The rest of Solanas’s life is a compelling argument that it isn’t. Much of the book is clearly an inversion of Freudian psychoanalysis (it proposes that men suffer from “pussy envy”, and so on). But that doesn’t necessarily mean that Solanas is insincere: serious ideas are often formulated in the shadow of their opposites (Hegelian antithesis, etc.), and it’s likely that SCUM Manifesto contains an extreme or distorted version of Solanas’s true feelings.

As an academic and one-time actress, she would have known of Antonin Artaud’s “Theater of Cruelty” method: exaggeration; cranking up the volume; overloading the senses; shoving actors and audience alike past their comfort zone.  SCUM Manifesto might be a Book of Cruelty, intended to shift the Overton window so that milder versions of SCUM would be politically viable. Or she may have been crazy. Or crazy like a fox. To be a chauvinist pig, she wasn’t a fox in any other sense.

“[FOOTNOTE: It will be electronically possible for [a male in the future] to tune into any specific female he wants to and follow in detail her every movement. The females will kindly, obligingly consent to this, as it won’t hurt them in the slightest and it is a marvelously kind and humane way to treat their unfortunate, handicapped fellow beings.]”

That’s no way to talk about Belle Delphine’s subs. Solanas stresses that we (meaning her 1970s readers) would be enjoying all these things already if it wasn’t for men ruining everything. It reminds me of those dubious graphs on atheist message boards, where humanity’s rising progress gets bodyslammed from the top rope by the CHRISTIAN DARK AGES.  We’d be colonizing the galaxy by now, if Constantine I hadn’t gotten baptised. Although we are, when you think about it. A one-planet-sized portion of the galaxy.

SCUM Manifesto can also be read as comedy. I’m not joking: Solanas is hilarious. Her prose is a mixture of histrionic sincerity, phrasing as odd as an Achewood comic, and 1960s “groovy, man” lingo that’s impossible to imitate and impossible not to laugh at. Why didn’t anyone tell me it was this funny?

“SCUM is too impatient to wait for the de-brainwashing of millions of assholes. Why should the swinging females continue to plod dismally along with the dull male ones? Why should the fates of the groovy and the creepy be intertwined?”

“The sick, irrational men, those who attempt to defend themselves against their disgustingness, when they see SCUM barrelling down on them, will cling in terror to Big Mama with her Big Bouncy Boobies, but Boobies won’t protect them against SCUM; Big Mama will be clinging to Big Daddy, who will be in the corner shitting in his forceful, dynamic pants.”

Or could they? This is the most fascinating thing about the SCUM Manifesto: it’s as forceful as an anvil to the face…and nobody’s sure what it means.  To anti-feminists, it’s a stick to beat feminists with. To feminists, it’s variously a reactionary horror from the 60s; a brilliant satire like A Modest Proposal; or a work to be approached with sympathy and compassion, containing the howl of a woman pushed to the edge and then far, far, over it.

It’s a radical document. It’s a foundational text of Second-Wave Feminism. Some want to burn it, others want to teach it. Few works mean so many things to so many people.

Solanas’s legacy is one of failure and unfulfilled dreams. SCUM Manifesto will soon be fifty years old: its promised utopia has yet to arrive: men still exist, the fates of the groovy and the creepy remain intertwined, etc. Solanas’s faith could move mountains, but the mountains all moved back. SCUM Manifesto might never have achieved notoriety at all if had hadn’t come wrapped around a metaphoric and literal bullet. It’s a final irony that her name will go down in history so indelibly linked to that of a male that she might as well have married him.