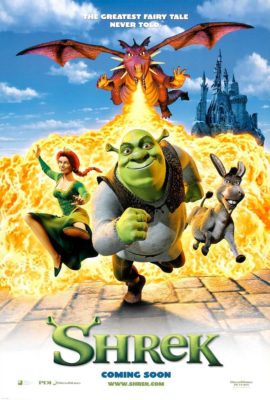 Halley’s Comet is a pale splash of starmilk that runs across the sky every 75 years. As it approaches the sun its frozen nucleus boils, becoming a gaseous tail a hundred million kilometers long.

Some people will see it twice. I expect to only see it once. All celestial phenomena are interesting, but Halley’s Comet is doubly so because it keeps coming back: a friend from space who can’t wait to see us again.

“Is there a point to this?” you ask, perceptive as always. Yes, by reading those words you are a few seconds closer to the Comet’s next appearance (28 July 2061). Here are some more. And some more. You’re welcome. It’s no trouble.

Let’s talk about the book first. 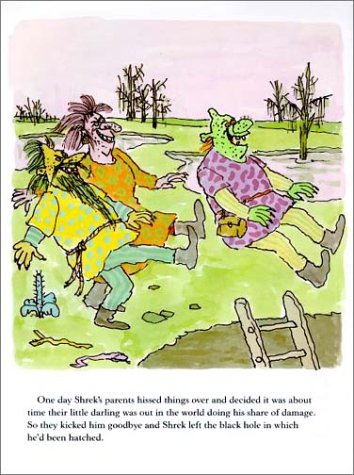 It’s 26 pages of brutal, scabrous art, with thick lines that often don’t join and colors eyedroppered from plates of slime infections. It’s the first time I can recall reading a book and thinking “I could have done a better job on the pictures”. Only later did I realize that “ugly” art can be intentionally so, and that this is some of the most challenging art to produce. There’s a world of difference between shitty drawings and drawings that use shittiness.

The story: Shrek is an revolting creature who roams around scaring people, animals, plants, monsters, and himself (after seeing his own face in a mirror). After being kicked out of home by his parents, Shrek wanders the land, seeking his destiny.

This isn’t a “Shrek’s not ugly, SOCIETY’S ugly for not accepting him! #LoveYourBody” kind of book. No, Shrek’s definitely ugly. Consummately repulsive. Pluperfecty loathsome. Also, he smells so bad that plants and flowers literally bend out of his way.

One of Thomas Aquinas’s arguments for God’s existence (Summa Theologiae 1:2:3) is that the “goodness” concept entails the existence of a maximally good being, ie God. Richard Dawkins has questioned this logic: does the concept of “smelly” require that a maximally smelly being exist somewhere? But after reading Shrek!, I think Aquinas had a point. Shrek is that smelly being.

But is Shrek evil? It’s hard to say. Aside from one clearly bad deed (stealing a peasant’s lunch), most of his actions are morally neutral at worst. He gets in lots of fights, but only because the other person starts them, and he generally incapacitates enemies instead of killing them. He gains the princess’s consent before kissing her, which is something multiple Disney princes don’t do. He has a nightmare about being hugged and cuddled by children, but haven’t we all?

(Update: Halley’s Comet is coming closer. Or further away, rather. It’s complicated, see – it has to reach the far point of its orbit before it starts swinging back. A shortening of temporal distance requires an increase of astronomic distance. The universe is full of such paradoxes.)

Stieg never “redeems” Shrek, or gives him a makeover, or transforms him into a handsome prince. Shrek is allowed to be what he is and look the way he does, and find happiness in his own way. Many beloved fairytales (the Ugly Duckling in particular) exhibit what Nietzche called slave morality. “You have flaws, but don’t give up! Maybe they’ll magically disappear!”

Well, sometimes they don’t. Shrek! gives it to you straight: you might have to sail the seas of life in adverse conditions. Many adult books don’t confront reality this well.

The book has zero passages describing Shrek as an ogre, by the way. He might be an extremely ugly man. Is there a “Humpty Dumpty is an egg” psyop going on where we collectively agree that he’s an ogre even though it’s not in the book? (Well, the back cover says he’s an ogre. But that’s hardly canon – authors usually don’t write their back blurbs.)

Published in 1990, Shrek! was aimed at preschoolers – although words like “blithe” and “varlet” and “churlish” and “carmine” probably caused some parents to reach for the dictionary. I like the author’s name. Stieg. All of the authors I grew up with had these ominous, evocative sounding names, usually beginning with S. Sendak. Stieg. Seuss. Shel. Stine. Names that made them sound like wizards in high towers, stirring bubbling cauldrons and summoning lightning. Surely no children’s fiction author would have a name like “Bob”.

All in all, a worthy book: Roald Dahl for kids who aren’t old enough for the real Roald Dahl. It’s well worth reading (or re-reading) while you wait for Halley’s Comet. 28 July 2061. Are you excited? I know I am. Soon.

But we still have the movie to discuss. 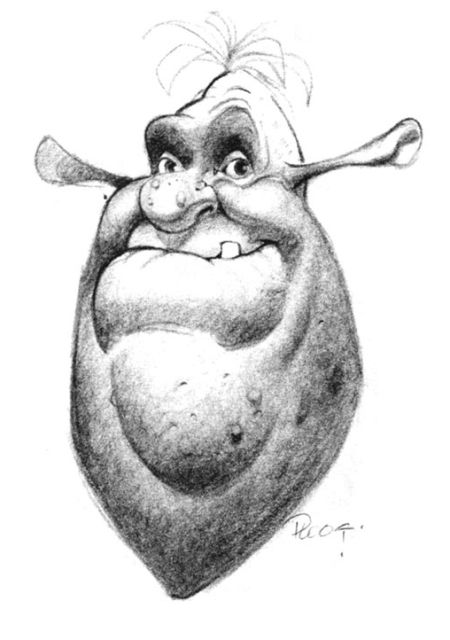 In 2001, commercials for a film called Shrek began rolling out. Stieg’s book? A distant memory. None of my friends had heard of it.

I saw the movie and it blew me away. I’d never imagined anything so funny, so clever, so sophisticated. This was clearly and inarguably the greatest film ever made.

I talked about it to everyone I could. I had the DVD, and spent hours playing with the special features (if you had a microphone, you could dub your voice over Eddie Murphy’s). If you were my friend and hadn’t watched Shrek, I genuinely thought there was something wrong with you.

I rewatched it in 2021, and it was unimaginably worse than I’d thought.

I hated almost every part of it: the plastic doll character design, the bad songs, the cheap pop references substituted for jokes, the “don’t judge people based on appearances!” message interspersed with cruel jibes about how short the villain is. Some computer animated films (Toy Story) have become timeless. Shrek has become ocular pollution: ugly and unfunny.

The movie seems generally well-remembered by others. I wonder how many of those “memories” occurred when the writer was 10, and if they’d survive a rewatch. I made it to the Matrix ripoff scene before mumbling to an empty room “You’re just…commenting on the fact that another movie exists! How is that funny?“

Some parts held up. The opening scene is fun and sells the movie well. There’s sharp writing at certain places (such as the Gingerbread Man sequence). The barely-disguised adult humor (“Lord Farquaad”)  isn’t exactly funny but at least shows a creative team with nerve.

But nothing could save the movie from the cancerous pus-filled oozing blastoma sac of Eddie Murphy.

I laughed at the donkey as a kid. Why? He wasn’t saying anything funny. In fact, I barely understood him at all.

Well, because he masterfully created the appearance of being funny. Eddie Murphy is a reminder that much (or most) of humor is in the delivery. His cadence, vocal rhythms, and confidence are flawless, and make him seem like a comedian doing a tight five on national TV and nailing it.

But he’s saying nothing. He was like an air-guitarist performing awesome rock moves with empty hands.

Donkey: [Chuckles] Can I say somethin’ to you? Listen, you was really, really somethin’ back there. Incredible! Yes, I was talkin’ to you. Can I tell you that you was great back there? Those guards! They thought they was all of that. Then you showed up, then bam! They was trippin’ over themselves like babies in the woods. That really made me feel good to see that. Man, it’s good to be free. But, uh, I don’t have any friends. And I’m not goin’ out there by myself. Hey, wait a minute! I got a great idea! I’ll stick with you. You’re a mean, green, fightin’ machine. Together we’ll scare the spit out of anybody that crosses us.
[Roaring]
Donkey: Oh, wow! That was really scary. If you don’t mind me sayin’, if that don’t work, your breath certainly will get the job done, ’cause you definitely need some Tic Tacs or something, ’cause your breath stinks! Man, you almost burned the hair outta my nose, just like the time– [Mumbling] Then I ate some rotten berries. I had strong gases eking out of my butt that day.

Yep, that’s Eddie Murphy in Shrek. Don’t worry, they only let him blather like that for fifty minutes.

It’s clearly improv – a director sat Murphy in front of a mic and told him to go nuts, hoping for another Robin Williams’ Genie. But when the entire movie is littered with this sort of babble, it becomes grating, and then enraging.

The danger of writing a character who annoys other characters is that they will also likely annoy the audience. The 2000s were boom years for black actors with nails-on-chalkboard patter. Will Smith. Chrises Tucker and Rock. Tyler Perry alone is persuasive evidence that we need to means-test microphones before giving them to the black community.

In all, not a good movie.

But there’s a deeper level to all of this. A conspiracy, if you will. As soon as I read item 3 on this list, I heard the X Files theme playing in my head. Mostly because I was playing xfilestheme.mp3 on my computer while reading it.

Douglas Rogers (the art director) found a place there that was a magnolia plantation where he did research to get the look of Shrek’s swamp just right. It was perfect and exactly what he had been looking for, for the film.

While there, though, he was in for quite the big surprise. And that surprise was an alligator, that unfortunately, ended up chasing him.

Once again, this crew’s dedication is something else. Though, I’m sure he wasn’t expecting the alligator to run at him.

All I can say is I hope he felt it was worth every bit of running from the alligator because that is a seriously scary situation to be in all for research for work.

An alligator. In a swamp. One that’s very defensive of Shrek’s legacy. Where have I seen this before? 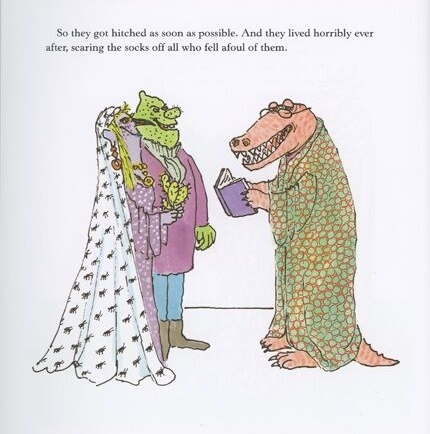