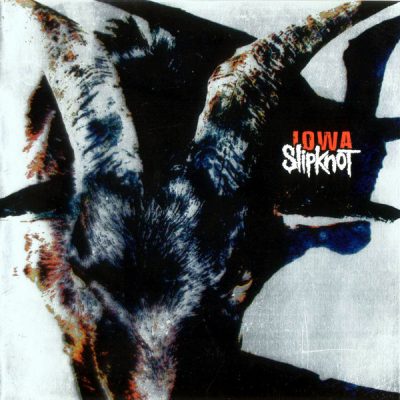 1999’s hottest craze next to school shootings is back with their second album and they’re still abominable. Slipknot might be the Coldsteel the Hedgehog of bands, but I’ll make the best case I can for them here: they are entertaining. I will never sit through a Coal Chamber album, and any scenario where I listen to Papa Roach will involve a CIA black site and the words “we have ways of making you talk.” But I occasionally listen to Slipknot.

What’s changed? Well, they toned down the wigger moments. Only one song (“I Am Hated”) has rapping on it, though Corey Taylor amps up the cringe by using a Vanilla Ice stress pattern. You know the one – where the rapper emphasises the last word of every line. “The whole world is my enemy, and I’m a walking TARGET / Two times the Devil with all the SIGNIFICANCE”. Why doesn’t Suge Knight dangle this jackoff out of a hotel window?

Instead we get extra helpings of noise and incoherence, sixteen drummers playing over the top of each other instead of fifteen, putrid clean singing, and more trendy modern shit like record scratches. The songwriting is horribly loose – half the time the band seems to have no idea what they’re doing. The guitars just chug aimlessly while endless snare and tom flurries roll over you, and then the song ends because a record label exec held up a “stop playing now” sign in front of the recording booth.

The band does okay when they keep things tight and interesting. “Left Behind” is quite good, though its melodic approach makes it stick out. “The Heretic Anthem” has energetic moments and a fun chorus. “Disasterpiece” starts well but then just becomes more shit by the end.

Iowa‘s pretty funny: almost a comedy album, in fact. Was this intentional? Do I look like I care? It’s impossible to hear the opening few seconds of “Everything Ends” without laughing, and “People = Shit” is hilarious throughout. Again, Coldsteel the Hedgehog.

But it’s also dull. Incredible dull. Reigning back the cartoony Fred Durst antics was a mistake: the silly stuff was the stronger side of Slipknot: it’s like if Tommy Wiseau released a director’s cut of the Room with “you’re tearing me apart” removed. Here we see the beginnings of their bland latter-career sound, culminating in All Hope is Gone, which might be the most boring album ever made. “Skin Ticket”, “The Shape”, “Metabolic”, “My Plague”, “Gently”, “New Abortion”…all garbage from beginning to end.

Iowa ends with…uh…”Iowa”. Fifteen minutes long. Great. Finally, they gave us the Dream Theater-esque prog nu metal epic the world has been clamoring for. I have nothing to say about this song, except that it’s unlistenable. It drones and goes nowhere and spends forever going nowhere. It sounds like they took every bad part from every bad Slipknot song and slapped them together, back to back. “Iowa” isn’t music, it’s nu metal writing a suicide note.

Why is the album called Iowa? Yeah, the band’s from there, but you don’t see country singer Kelsey Waldron releasing an album called Monkey’s Eyebrow. I’ve long suspect that Iowa isn’t actually the title, it’s a disability sticker. It’s like Roadrunner Records is saying “Go easy on this band, they’re from freaking Iowa, dude.” I don’t know much about the state, but based on the news stories I could find (A swimmer was infected with a brain-eating amoeba after visiting at an Iowa beach) Slipknot has clearly overcome great adversity to get where they are. I salute them, and will commemorate their achievements by playing Metallica instead.