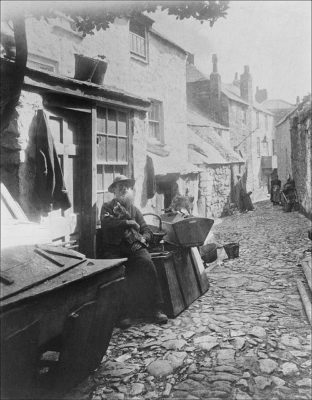 I met a man with seven wives.

Every wife had seven sacks,

Every sack had seven cats,

Every cat had seven kitts.

How many were going to St. Ives?”

This riddle is as old as the hills (though some hills were formed yesterday), and tests the reader’s memory, multiplication, reading comprehension, and lateral thinking skills. There are several “correct” solutions, and your preferred solution often changes the longer you think about it.

1. The classic answer is “one”. If the narrator met the others on the road, then they must have been going in the other direction, away from St Ives.

2. But what if the narrator is on horseback, and the others are on foot? Then he could have easily overtaken them on the road.

3. The wording is crafty. The man has seven wives; we’re not told that they’re on the road with him. Maybe they’re at home, fanning themselves in a couch while exclaiming “lack a day!” or whatever women in the 18th century did.  Same for sacks, cats, and kitts. “With” is a preposition that can either mean “accompanied by” or “characterized by”, and its usage here is unclear.

4. And all the narrator knows is that these people are on the road to St Ives. They needn’t be going there: maybe they’ll stop halfway, have a picnic, and then go back home. I don’t think there’s anything worth seeing at St Ives.

5. Even as a straightforward multiplication problem, the riddle is confusing. Is the answer 2,802 (the geometric series of wives, sacks, cats, kitts, plus the narrator and the husband?). But surely the 49 sacks don’t add to the count – they’re storage for the cats and kitts – so the answer is 2,753. Except line six explicitly tells us to count the kitts, cats, sacks, and wives…but doesn’t say to include the narrator or the husband. So maybe it’s 2,800.

In infosec you sometimes hear the analogy “steel door in a cardboard wall” – a security system attempting to defend a space that’s indefensible. Here, mathematics is like a steel-framed bridge spanning two cliffs of chalk. You can use a calculator to add up numbers. You can create a futuristic quantum D-wave supercomputer with no purpose except to add up numbers. It won’t help. There’s no way to know how many people were going to St Ives, because the answer is ultimately found not in mathematics but in the capricious winds of the English language.