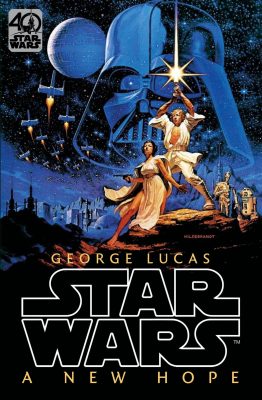 Sometimes we experience movies under circumstances that prejudice us against them. I still remember being in a Blockbuster video with a friend (not long after seeing The Phantom Menace) when he learned that I hadn’t watched the original movies. We then had a Never Seen Star Wars conversation. “Whaaaaaaat? Dude! How have you never seen Star Wars?” No idea what I was expected to say: does it take effort to not watch a film? Did he want to know my special never-seen-Star-Wars diet and workout regimen? Regardless, he snatched my handful of tapes and reshelved them. My heart sank: I knew we’d be watching Star Wars that night.

I’ll admit that this ruined the film for me. Even today, my principle association with Star Wars (both film and franchise) remains “the kind of thing people bully you into enjoying.”

I admire parts of it now; good puppetry and special effects, and Alec Guinness is a talented actor. His scenes on the desert planet (which were filmed in Tunisia, I think) have the stately gravitas of Lawrence of Arabia or The Man Who Would Be King. Long shots of desolate horizons, with grime and rust and sand corroding through the frame. There’s a sad, understated quality to his performance – the sun’s going down, his sun’s going down, and everyone lives in the shadow of a once-glorious empire that is rotting like late summer fruit. It’s very British film in places.

In other words, I enjoy the parts where Star Wars isn’t Star Wars. At the movie’s heart is a ball pit of kiddie stuff – lightsabers, blasters, the Force, the Millennium Falcon – that doesn’t move me at all. The more quintessentially Star Wars the film becomes, the worse it gets.

It’s obvious that Star Wars’ tacky, toyetic style dispersed through culture like poison spores and made the world worse. Less obvious is the fact that this doesn’t work in the original film. Dark Vader and the stormtroopers resemble shiny plastic action figures: any sense of danger is undercut by how stupid they look. One of the most over-the-target gags in Mel Brooks’ Spaceballs that the villains of Star Wars are impossible to take seriously.

Once Luke leaves the desert, the film’s overriding look becomes “plastic and PVC”. Next to the awesome heft of 2001: A Space Odyssey, Star Wars looks weightless. The X-Wings resemble model kits glued with Araldyte, and they’re flown by pilots wearing dorky oversized NASCAR helmets equipped with welding goggles. Is there a point to all this safety gear when you’re flying at sixteen times the speed of sound? One brush with anything and you’re toothpaste.

The actors either suck or are deep-sixed by the writing. Mark Hamill has the charisma of a crash test dummy, Carrie Fisher is a sociopath who wisecracks about Chewbacca’s excessive body hair  the same day her planet blows up, and honestly, why are we allowing ourselves to be psyopped that Harrison Ford is a charming rogue? He’s a miserable grouch whose main character trait is that he doesn’t want to be in the movie.

There is a gay robot. I’m not offended by the gay robot. He is a time-honored British archetype, after all. He’s just a very odd character given the “Epic Campbellian space opera that should be taught in schools and forcibly inflicted upon children in a collective hazing ritual” role Star Wars has in our culture.

The Star Wars setting is interesting, if incongruent. It’s a universe where moon-sized battlestations exist and lasers shred entire worlds to plasma…but spaceships can still be fixed by smearing engine oil on your arms and rummaging with fuel lines. Lucas’s setting is futuristic, but he clearly only cares about the past (particularly, the past he saw movies of his youth). He provides pastiches of WW2-style dogfighting, wild west gunfighter duels, Turkish prisons, medieval swordfights, and more. Speaking of, lightsabers seem like they’d be dogshit weapons. Who needs a sword that annihilates everything it touches? A careless backswing would split your head in half. The careful, slow-paced lightsaber duel at the end is actually realistic: that’s the only way you could ever fight with those things.

Lazy reviewers who don’t think usually default to describing films as “a love letter to [the film’s most prominent influence].” Lucas wrote a love letter complete with spelling errors, backward letter Rs, and semen stains. He sometimes comes up with inspired ideas, and sometimes he squeezes the ball through the hoop in spite of himself, but nowhere do we see evidence that he’s competent. Star Wars is just an occasionally compelling mess, roughed into shape by skilled and patient editors.

Was the opening text scroll his idea? It’s a good example of my least favorite thing: audience handholding. Yeah, why reveal the backstory through context or dialog, when you can just put some text-based exposition on the screen. Why even make the movie at all? Just throw the entire screenplay up there in yellow News Gothic Bold text. Really good filmmaking there.

I am not reacting to Star Wars so much as it’s fans and its place in society.

Star Wars belongs with bacon, duct tape, I Fucking Love Science, We Don’t Deserve Dogs, and “DAE wrong generation?” Beatles worship. In general, I am creeped out by effusive public cheerleading for things that are universally loved. No, it’s not wrong to enjoy a thing that eight hundred million other people enjoy. But it’s at least suspect to turn it into a marker of your identity. What hole are you trying to fill?

I can at least respect people who join cults because they’re doing something brave, and going against the tide. But where’s the bravery in being a fan of a thing like Star Wars? You are the tide. I don’t hate you if you swear a Han Shot First T-shirt but I also think that if you lived in the world of the movies you’d swear allegiance to the Empire.

And God damn it, a flickering holographic ghost is emphatically not more powerful than I can possibly imagine.