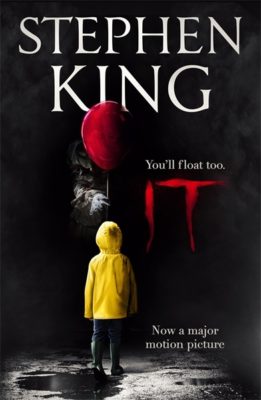 A long book with a short description: “Gross Stuff(tm) happens to kids.” This, more than any other Stephen King book, is just a cavalcade of youngsters having traumatic experiences. Lest I be misunderstood, I fully endorse youngsters having traumatic experiences, but it does make for a book punctuated with lots of “what the fuck?” and “what am I reading?” and “why is this in the story?” and “do we need forensic-level analysis of all the boys’ penises?”

It is the archetypal Stephen King “big secret in a small town” story. There’s a lurking horror in the sewers, and ever twenty-seven years it emerges (usually in the guise of a clown) to kill children.

It feeds and gains power through fear, and in fictional Derry, there’s a lot to be afraid of. Even without the clown, it sounds like a miserable place to grow up. Daily life involves dodging switchblade-wielding bullies, gay-bashing homophobes, dog-murdering Klansmen (not kidding), pedophile lepers (still not kidding), and adults that tend to be so jaw-droppingly stupid that it’s amazing that they can tie their shoelaces.

The spotlight is on a group of middle-school children, who dub themselves “The Losers”. Their casting is familiar to any reader of 80s-90s young adult fiction: the Fat Kid (Ben Hanscom), the Asthma Kid (Eddie Kaspbrak), the Speech Impediment Kid (Bill Denbrough), the Screwball (Richie Tozier), the Jewish Kid (Stan Uris), the Black Kid (Mike Hanlon), and, of course, the Girl (Beverly Marsh). Denbrough has the most obvious connection to the monster – his younger brother was murdered by it – but in time, it will intricate itself in all their lives and personal traumas.

I enjoyed the quiet moments at the beginning, where the kids just hang out together. It isn’t all about pedophile lepers, and there are warm, funny, and nostalgic scenes that don’t contain any horror at all.

Soon, they are drawn into a battle against the monster in the sewers. They think they kill it, but twenty seven years, the murders begin again. The children (who aren’t children any more, and it’s hinted that whatever protective magic they once held may have ended), decide to return to Derry to destroy the monster for good. I sympathize with their cause, but honestly, is their hometown worth saving? Freeing Derry from It would be like exorcising a ghost from Camden, New Jersey. Even if you succeed, it’s not like that place will be anyone’s next holiday destination.

The exact nature of the monster becomes muddled in It‘s 1100-page length. At various points it’s suggested to be a projection of the town’s negative energy, a tulpa emerging from the fears and imaginations of children, a crashed UFO (?!?), a Lovecraftian abomination from the “multiverse”, a Manichean embodiment of the dark side (the light side is represented by a turtle), etc.

The clown is the monster’s iconic form, but it has many others, including a werewolf, a mummy, Frankenstein’s monster, and a disembodied eye. Stephen King seems to be paying homage to the Universal horror films, and trying to make them scary again.

He only “seems” to be, because like a lot of his 1980s work, he’s trying so many contradictory things that any central authorial vision gets lost. The Lovecraftian elements sit oddly with the Monster Mash stuff, and the “xTrEmE hOrRoR” Ed Lee pastiches don’t seem of a piece with the nostalgic Wonder Years scenes. It’s the definition of a mixed book, filled with ideas that sometimes work and sometimes don’t. An idea that works: the clown. An idea that doesn’t: the giant bird.

It was adapted at least twice, once as a miniseries starring Tim Curry, and again, more recently, as a pair of horror movies heavily derived from Stranger Things (which itself was heavily derived from It). Neither had the courage to film It‘s most infamous scene, which takes place in the sewers and would have earned either movie an NC-17 if filmed verbatim.

Anyone making any sort of It movie has chosen a hard row to hoe. The book is gigantic, and confusing, and sprawling. The clown Pennywise is one of the most marketable villains ever, but the rest of the book is kind of a mess. It’s the product of the relentless, manic energy King had the 80s – an accurate cover would list “Cocaine” as the book’s co-writer, and to be honest, I’m not sure that King’s name wouldn’t get second billing

(This, foremost among King’s work, must have been hard to look up on early search engines, which tended to reject searches for pronouns. As far as unfortunate titles go, It is even less searchable than The Who.)