Teach Us to Outgrow Our Madness – Kenzaburo Oe 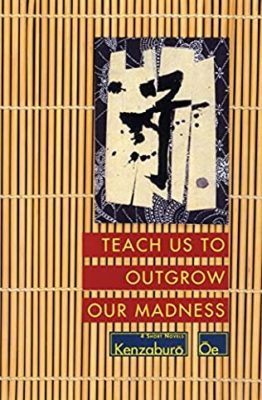 On August 15, 1945, a Japanese schoolboy heard the voice of god crackling from a transistor radio.

“We have ordered our government to communicate to the governments of the United States, Great Britain, China and the Soviet Union that our empire accepts the provisions of their joint declaration…”

The Surrender Speech was the first time the Showa Emperor had ever spoken to the common people, and it destroyed young Kenzaburo Oe’s faith. He’d thought that God-Emperor was… a god. He’d had dreams of a massive bird, soaring over Japan like a protecting shield, pinfeathers tearing through the sky like blades. To hear the Emperor speak in a man’s voice (which his schoolmates could mockingly imitate) took a hammer to his spirit.

Occupation soldiers rolled into Oe’s mountain village later that year. He expected the Americans to slaughter them all; instead they gave the villagers candy bars. This seemed incomprehensibly cruel to Oe. He’d expected death; had received disillusion. Everyone had lied to him. The Emperor wasn’t a god, the Americans weren’t devils, and if he was to die for a noble cause, he would first have to find one.

The inner turmoil of this moment colors much/all of Oe’s subsequent writing. Teach Us to Outgrow Our Madness is a collection of four novellas, grappling with a past that has proven to be unreliable.

“Aghwee the Sky Monster” is a surrealist tale similar to Gogol. The narrator becomes the friend of the mononymous “D”, a mad composer who is haunted by the ghost of his son Aghwee (who appears to him as “a fat baby in a white cotton nightgown, big as a kangaroo”). Only D can see this apparition, with whom he conducts nonsensical conversations .

Aghwee is obviously a delusion. Or is he? His existence controls and shapes D’s behavior in the same way a real baby would (for example, D will avoid dogs because he doesn’t want to startle Aghwee, who’s afraid of them), so does he exist in a phenomenological sense? The narrator probes D’s past, finds deep and unhealed wounds, and even horror. It might be D’s deserved fate to carry Aghwee with him eternally.

Shiiku, or “Prize Stock”, is about a black American pilot who crashes in a remote Japanese village. He is chained up and regarded with a mixture of awe and hillbilly racism. I’ve seen some people online describe this story as “autobiographical”, although it couldn’t be – there were no black pilots in the Pacific Theater. I think Oe’s offering some commentary on Japanese wartime propaganda, which contrasted “enlightened” Japan with the socially backward US. The US had consigned generations of blacks to slavery, a medieval institution that Japan had abolished centuries ago (Japan’s ~20 million Chinese and Javanese “forced laborers” were not regarded as slaves). The IJN conducted so-called “Negro Propaganda Operations” – covert short-wave radio broadcasts attempting to recruit African Americans to the Axis cause. “Prize Stock” is caustic commentary on Japan’s supposed post-racial politics. They were more like Americans than they thought.

“Teach Us to Outgrow Our Madness” is about a fat Japanese father and his disabled son Eeyore (this is another repeated theme of Oe’s, whose own son has severe autism) who have several supernatural adventures. My least favorite story: it reprises themes expressed more eloquently elsewhere.

Then there’s the monolithic “The Day He Himself Shall Wipe My Tears Away”, a long and intricate story that has to be read carefully: there are tricky perspective shifts. In short, it’s about a man who is dying in hospital of a “cancer” that is almost certainly imaginary. Descending into the story is descending into a tangled web, there’s narratives within narratives, lies within lies, houses built on quicksand, quicksand built on quicksand, etc.

It’s like a Fellini movie, none of the facts are that important: they only matter insofar as they illuminate the mental landscape of a profoundly deluded man. He’s arrogant, proud, self-pitying, defensive, and not particularly sympathetic. The lunatic in “Aghwee” is suffering from madness as a form of penance. The hero of “The Day…” wears insanity like protective armor. Apparently this is Oe’s veiled roman-à-clef of Yukio Mishima, author and poet turned right-wing nationalist who had committed seppuku two years previously, following a failed coup attempt.

So all four stories are personal, yet they’re bigger than Oe. He shows the way a person can forcibly have the fabric of a nation threaded into his skin, and the pain of having that fabric torn away. What’s the use of memories? To show us what happened in the past? Or to guide our behavior in the present? The two goals are often incompatible.

It asks questions such as “what’s a nation founded upon?” Sometimes, the answer is “nothing”. Take Algeria. Why does Algeria exist? For no reason. It’s just there. But then you have “proposition” nations, which are founded (or believe themselves founded) upon an ideal or belief. I’d say that the United States, modern-day Israel, and Showa-era Japan fall into this category.

Generally it’s bad to be a proposition nation, because you run the risk of your proposition being proven false. What happens then? What happens if you’re the Independent State of Phlogiston? The Republic of Timecube? You lie, I guess. You deceive your citizens, deceive yourself, because the only other course is ruin. Japan could have never have won the Second World War. It persisted on in denial of this fact. Its soldiers were fighting a hopeless war, and Kenzaburo Oe was being raised to throw himself into a meat grinder. Nobody had any plan to win. The nation just staggered blindly forward, deeper into the disaster, inflicting psychic trauma on its citizens that lasted for years. State-sponsored falsehoods continue in memory long after the state falls to pieces.

Oe achieved fame in Japan due to work like Teach Us to Outgrow Our Madness, but it’s easier to forgive than to forget. In 1994, he was named to receive Japan’s Order of Culture. When he learned that he would receive the Order from the Emperor’s hand, he refused.