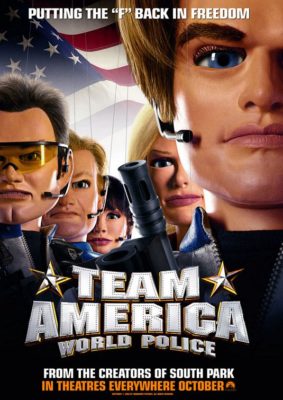 At age nine, anything seemed cool if it was rumored to contain swear words. I lived in awe of the Rapper Who Swears (Eminem), the Videogame That Swears (Grand Theft Auto 3), the Books That Swear (Tom Clancy’s), and particularly the Cartoon That Swears (South Park).

When I finally saw the South Park in adulthood, I was surprised. The Cartoon That Swears turned out to be an intelligent and funny show with a lot to say and a finger close to the pulse. But I never really liked the show’s cultural commentary. It always had a strained quality, with Trey Parker and Matt Stone struggling so hard to be both funny and profound that you could see sweat dripping from the storyboards. I preferred the episodes that took a lighter touch and had the kids just goofing around.

The duo’s 2004 film Team America: World Police has similar strengths and weaknesses. Lots of jokes land, but many others don’t, and there’s a clear reason why.

It’s about Team America, a covert spec-ops force who (in the opening scenes) blows up the Eiffel Tower, the Louvre, and the Arc de Triomphe while attempting to stop a terrorist attack in Paris. One of their members dies in the fiasco, and his replacement is Gary, a Broadway actor. With Kim Jong Il and terrorists from Durkadurkastan threatening to commit “9/11 times 2,356”, they need Gary’s acting skills to infiltrate a terrorist cell.

Straight away, there’s a horrible miscalculation: puppets. Nobody likes puppets, or wants to see puppets. They’re creepy. The nightmare fuel is at relatively low levels during dialog scenes, but whenever a puppet moves or does something the odd stiffness is all you can focus on. It would have been better as CG, or South Park style cutouts, or live action. Anything except puppets.

But TA:WP‘s big problem is that the geopolitical satire elements just don’t work. Who are we laughing at? And at whose expense? There’s a saying that comedy should punch up, not down (in other words, make jokes about deserving targets). I don’t agree: often it’s unclear who the “deserving” target is in a given joke and reducing comedy to a form of cultural warfare is gauche, to say the least. But Team America doesn’t punch up or down. It punches the air. And itself.

An example: the first scene involves Team America destroying half of Paris. “Okay,” I thought, “it’s mocking gung-ho American aggression.” But soon things get muddled: the terrorists actually pose a credible threat to global stability, and Team America’s methods are both necessary and successful in fighting them. The film basically chops away its own knees: creating straw men and then valorizing them.

And (as Roger Ebert mentioned at the time) it’s striking that the White House is spared as a target. Team America operates on their own, without supervision (it’s mentioned that it’s sponsored by corporations, a shot at Halliburton that goes nowhere). The implication seems to be that if a military operation ends in disaster or tragedy, it’s the fault of a few loose cannons on the ground. Nobody higher up should be blamed or held to account. Is that what they’re saying? I don’t know. What are they saying?

To be clear, I don’t care that the film is apolitical, nor do I want it to be full of Bush jokes (nothing was more hack in 2004) But when you make a movie about a complex geopolitical situation, you should have more to say than “everyone is a retarded fag, plus the military is cool”.  It’s a rough bit to laugh at.

But I insulteth the film too much. A lot of it is really funny. There’s one gag as hilarious as anything I’ve seen recently, and it has nothing to do with politics. As Gary gets briefed at the top-secret Team America base, he’s told that if he’s taken prisoner he’ll want to take his own life using a special tool.  You’re expecting a high-tech gadget…but Spottswood hands him a hammer. A fucking claw hammer.

There’s plenty of jabs taken at the messiah complex of certain actors. The funniest Simpsons episodes are the ones that riff off the cartooning industry, and Parker & Stone are likewise in their element when writing about showbiz. They’ve never been afraid to shit where they eat. They famously attended the 2000 Oscars dressed in drag and high on LSD, which might explain why they don’t generally get invited to nice occasions like that.

Even the Thunderbirds-esque puppets sometimes work as a source of “anti-comedy” (think Tim and Eric). There’s a moment where Gary is riding a motorbike, collides with the camera, and awkwardly flips over. It’s so jarring and dumb that it gets a laugh. I’m pretty sure that this was an actual accident left in the film.

This is the sort of film where you find enjoyment in the decoration – the occasional bit of inspired craft or filmmaking, the funny one-liners, the songs – rather than the substance. TA:WP is like scaffolding that stays up while the building at the center collapses. The satirical core of the film – which should have been its strong element – ends up just being a gaping black hole.