Tender is the Flesh – Agustina Bazterrica 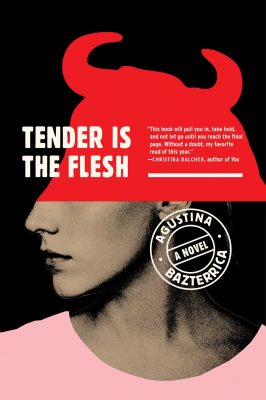 A lumbering parable that asks “what if we used humans as livestock?” A provocative question that has never been asked before, except in A Modest Proposal and Soylent Green and Sweeney Todd and The Road and…

Marcos works at a processing plant for “special meat”, ie, people. An infectious plague has rendered all animal meat poisonous, and the government (through euphemism and bureaucracy) has legalized cannibalism. Most of his book involves Marcos going about his daily life while feeling sad.

The book never gets out of its own way. It’s so certain that it has a great premise that it never moves past that premise and does anything with it. Marcos is a flat and uninvolving character. The endless quotidian detail of his job just provokes a response of “Yeah, eating humans is horrible and awful. So what?”

I suppose the book is intended to shock us awake about the horrors of factory farming, or whatever. It’s a thought experiment often advanced by environmental ethicists. “How can you be comfortable eating a cow but not a person?”

For the same reason I’m comfortable driving over asphalt but not a person. Asphalt isn’t people, and neither are cows. The parable falls apart for me because it comments on a real life issue in a way that distorts the issue beyond recognition.

Moral philosopher John Rawls proposed that ethical decisions be made behind a “veil of ignorance”. Imagine you’re a baby that’s about to be born. You don’t know anything about who you’ll be, or your circumstances, or anything. You might be a king or a pauper. In light of this, what world would you like to be born into?

Specifically, would you want to be born into Bazterrica’s world? I wouldn’t: I might be special meat and suffer any number of horrible experiences. But suppose Rawl’s veil of ignorance crossed the species barrier. You might be born as a human, or born as a cow. Would you like to exist in that world (ours)?

The thing is, I can’t imagine life as a cow. Do they experience pain? Certainly. Is it the same pain as ours? I don’t know. Are they conscious? Probably. Is it a sort of consciousness where they can anticipate the future, feel regret, imagine different circumstances, and so on? I don’t believe so. These are questions Tender Is The Flesh doesn’t get around to answering. Most people object to factory farmed livestock because the animal suffers in the process, but raising humans as livestock would (to my view) be morally wrong even if the human didn’t suffer, because you’re infringing on the will of a highly conscious being. You can’t swap animals with humans in this scenario, the whole equation changes.

Bazterrica’s world needed a stronger sense of realism. Instead, it comes off as fantasy, totally disconnected from our world, less A Modest Proposal than Gulliver’s Travels. The scenario makes little sense. Nobody would raise humans as livestock even if it were legal to do so. Humans are strong, intelligent, and capable of communication and using tools, all of which would make them extremely dangerous to their captors. Worse, they take fifteen to twenty years to reach maturity, during which time they must be fed millions of calories. How could that be economically viable? I think if meat became inedible we’d start meeting our protein needs with things like soy instead.

The inciting incident is that Marcos receives a female human as a gift-slash-bribe. He’s supposed to eat her. He develops feelings for her instead, and eventually impregnates her, (ironically) a major crime. I was reminded of something I saw on Reddit. If Elmer Fudd was trying to rape Bugs Bunny, it would be horrifying. Luckily, all he’s trying to do is kill him.

This is another big moral issue: pets. We have furry animals in our homes that we consider part of our families. But on a certain level, this is more manipulation. They’re there to fill selfish emotional needs. Thousands of dogs get abandoned once they’re no longer cute puppies, and even well-cared for animals are living a life they weren’t designed for. There’s an argument that keeping a big dog in a suburban apartment is as wrong as raising a cow in a feedlot. This was the stronger side of the book for me.